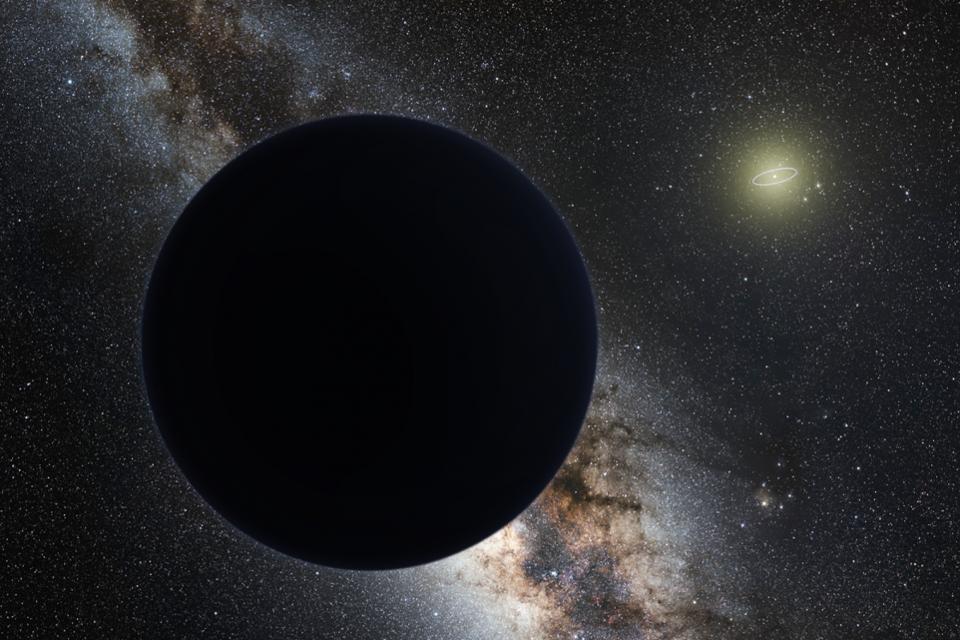 Despite all the advances that have occurred in human history, one extraordinary puzzle still remains right in our own backyard: we aren’t sure how many major planets there are in our Solar System. Our present generation of telescopes have revealed thousands of objects in the asteroid belt and Kuiper belt, in addition to the eight major planets and hundreds of moons. Beyond the Kuiper belt lies the Oort cloud, and beyond that still are thousands of planets around other stars, detected hundreds of billions of stars in our own galaxy, and some ~2 trillion galaxies in the visible Universe.

And yet, for the past few years, astronomers have heatedly debated whether the eight planets we see are all there are, or whether there isn’t a ninth (or potentially even more) out there beyond Neptune. For approximately the last five years, a small population of trans-Neptunian objects with unusual orbits has been discovered, potentially indicating, indirectly, the presence of a large, massive object many times farther from the Sun than Neptune is. However, that result has been disputed, as the sample size is small and contains unquantified uncertainties.

A new paper, accepted in the Planetary Science Journal on February 9, 2021, has pulled the proverbial rug out from the strongest evidence supporting Planet Nine’s existence. It’s a complex and fascinating story, so let’s dive right in.

Over the past few decades, we’ve gone from just a handful of known objects beyond Neptune to a myriad of them. There are close to 3000 of them detected as of early 2021, with approximately 70,000 more expected to exist with a size larger than about 30 kilometers in diameter. Most of them orbit in a disk-like distribution: the Kuiper belt, typically taking hundreds of years to orbit the Sun. On the whole, most of these orbits are:

However, a few of these objects have orbits that are exceptional. Some have very high inclinations, like they’re coming from out-of-the-plane of the Solar System. Others are elongated, with the “long” axis of the elliptical orbit much, much longer than the “short” axis. And a few of them even have multiple parameters, simultaneously, that put them out of the range of normal.

The big question we should ask, if we’re being responsible scientists, is why?

When you have a large number of small, low mass bodies in a distant orbit around a much more massive body — like the objects in the Kuiper belt orbiting the Sun — you fully expect that there are going to be interactions between these small bodies. They’ll interact with one another gravitationally; there will occasionally be collisions; and every once in a while, one of them will migrate.

If you migrate inwards in our Solar System, you might get gravitationally kicked by Neptune. This is where the majority of long-period comets, like Halley’s Comet, come from, and also where Triton — Neptune’s giant moon that’s clearly been captured from the Kuiper belt — originates. These classes of objects can all be explained with the conventional eight planets we know.

On the other hand, you might find objects that look like they’ve been “kicked” by something else: something that’s much farther out than the Kuiper belt, taking thousands of years to complete even a single revolution around the Sun. If something like that is out there, you’d expect a novel, significant population of these distant objects with a particular set of unusual orbital parameters. We call them ETNOs: extreme trans-Neptunian objects.

About 5 years ago, two Caltech astronomers — Konstantin Batygin and Mike Brown — decided to study the clustering properties of a set of these unusual objects, expecting to find that they were just distributed randomly. With the eight known planets and the size-and-mass distributions of the Kuiper belt objects we expected, any unusual objects should have orbital parameters, like which direction their long axes point along or how their orbital planes are aligned with the Earth-Sun plane, that are randomly distributed.

But the ETNOs they had, even though there were only a few of them (around 10 at the time), told a different story. Instead of a random distribution, the unusual objects they had identified exhibited clustering properties that appeared to be related. The odds that these ETNOs would be randomly clustered the way they were found to be wasn’t just low, it was remarkably unlikely: like one-in-many-thousands unlikely.

You probably wouldn’t bet your life on those odds, but there was a potential physical explanation for this that you might bet on: a massive planet, perhaps between the mass of Earth and Neptune, residing much farther out than even the far edge of the Kuiper belt.

An object this massive, even so far away, would be sufficient to clear its orbit over the lifetime of the Solar System, making it a bona fide planet according to the International Astronomical Union’s definition. How ironic: the same definition that officially “demoted” Pluto in 2006 might now promote a new, previously unforeseen body to the status of “Planet Nine,” but for good this time!

Of course, there are two good ways to follow up:

You might be chomping at the bit, internally asking something like, “okay, well, it’s been about five years, and we didn’t find anything directly, but we certainly must have more objects — ETNOs, right? — that fall into this ‘unusual’ category by now. So, what do they show?” Before I can tell you that, though, I want you to realize something: it’s possible that this initial population of objects, despite what we’ve observed, may not actually be clustered at all.

Think about this: there’s a big sky out there, about 40,000 square degrees in total. When you are searching for distant objects in the outer Solar System, hoping to determine their orbits, you have to:

It is true: we’ve discovered many more objects out beyond Neptune over the past few years, through multiple independent surveys, like OSSOS (Outer Solar System Origins Survey) and the Dark Energy Survey’s DECam instrument. But what we see isn’t telling us what we’ve actually got.

The reason for this is known, in astronomy, as bias. There are many different ways your results can be biased. When you look at the night sky with your naked eye, you’re seeing the brightest stars as viewed from Earth. Most of these stars are intrinsically bright but quite far away; a few are intrinsically fainter but relatively close by. The overwhelming majority of stars are too faint to be seen with the naked eye, however; even the closest star to us, Proxima Centauri, requires a telescope of significant size to spot! In astronomy, we call this Malmquist bias: we’re biased towards the objects that are easiest to see.

There’s another type of bias at play here: selection bias. You can only observe the objects that would show up when and where your telescopes are looking! So factors like:

can all play a role in determining what you see. Troublingly, the effects of the objects used in the initial study that concluded Planet Nine may exist — the survey of Sheppard and Trujillo — did not quantify their selection bias.

So now, let’s fast-forward to the present. There are now three relevant surveys, as the Sheppard and Trujillo data and OSSOS data are joined by the DECam data, and a grand total of perhaps a few dozen of these objects. What you’d ideally be able to do is to go back through the records for all of these surveys and figure out where they looked, when they look, and how long they looked for: the big factors that allow you to quantify your selection bias. If you can do that, you can responsibly compare what you saw with what is likely to occur by just random chance.

That’s why this new paper is so exciting: for the first time, thanks to the stupendous work of University of Michigan graduate student Kevin Napier, selection bias for all three of these surveys have now been quantified.

The picture you see, above — Figure 6 from the paper — shows where, with the white lines-and-dots, the observations were most sensitive to objects appearing, and the red points show the objects that were actually found and selected as the physically interesting ones. The red points are the data we have; the white area represents the relative probability of finding objects in those locations.

Surprise, surprise: the data is clustered in the places where we looked, and not, preferentially, in the places where we didn’t look. What they looked at was, “how confidently can we rule out a non-clustered Solar System?” Previous work in 2019 ruled it out at the 99.8% confidence level: that’s pretty confident! But in the new paper, they could only rule it out at the ~83% confidence level, meaning there’s something like a one-in-six chance this could be random. That’s not particularly compelling, and might reasonably considered enough to greatly weaken the motivation to continue the search for Planet Nine.

But this does not mean that Planet Nine is dead, not by any means. If we want to understand the distribution of these ETNOs — these exceptional, extreme, objects — we really need to have good data on hundreds of them, not ~20 or so. It’s still possible that the objects really are clustered, and that the clustering is due to a distant, massive planet, and just happen to be clustered in the directions we observed. Without more comprehensive, better data, we simply cannot know.

It’s eminently possible that this new analysis, rather than reducing the strength of the signal in support of clustering, simply increases the uncertainties to such a level that a very real signal no longer stands out from the noise. With the data we have in hand today, it isn’t enough to decide the issue, either in favor of or opposition to the existence of an additional planet beyond Neptune. Still, it’s a remarkable study and a remarkable advance, and the quantification of selection bias brings us one important step closer to understanding what’s out there beyond the limits of where our telescopes can presently reach.

Hopefully, with the advent of new ground-based and space-based telescopes on the way, and the Vera Rubin Observatory in particular, we’ll either find Planet Nine or rule it out entirely. Whether it exists or not is for the Universe to decide, but finding it and understanding what’s occurring in the outer reaches of our Solar System is entirely up to us.