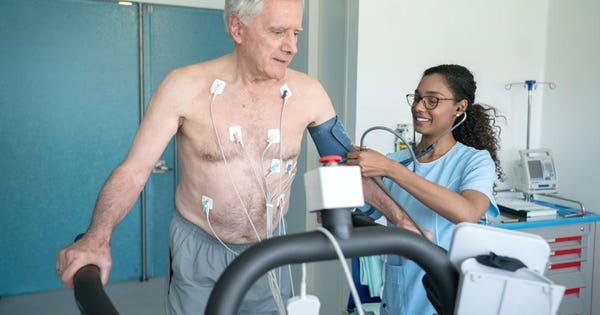 As Betty Rizzo sang in the musical Grease, “there are worse things I can do.” Wearing a meat suit in a lion’s den or cementing your head in a microwave oven come to mind. However, being out of shape could be worse than even smoking or having diabetes if you want to live a longer life, at least according to a study just published in JAMA Network Open,

For the study, a team from the Cleveland Clinic Foundation (Kyle Mandsager, MD, Serge Harb, MD, Paul Cremer, MD, Dermot Phelan, MD, PhD, Steven E. Nissen, MD, and Wael Jaber, MD) analyzed data on 122, 007 patients who had undergone exercise treadmill testing from January 1, 1991, to December 31, 2014. This included looking at the patients’ treadmill test results, some of the patients’ habits and medical histories, and how long the patients survived after the test. The median follow-up after the test was 8.4 years, with a range of 4.3 to 13.4 years.

An exercise treadmill test is not a written multiple choice test where you get asked about treadmills. Instead, you walk or run on a treadmill machine while having your heart rhythm, blood pressure, and symptoms monitored. The tester will change the speed of the treadmill to determine what you can tolerate and how long you can stay on the treadmill before needing a break. If you haven’t yet had a treadmill test, otherwise known as a stress test, don’t worry. Most of the general population hasn’t either. Unlike vaccinations, stress testing is not routine for everyone. Although watching babies running on treadmills could be quite amusing.

Instead, there are three common reasons to get an exercise treadmill test. One is if you are worried about heart disease. For example, you may be suffering symptoms like chest pain. A second is to test your heart function before undergoing major surgery that will require anesthesia. A third is performance testing if you are an athlete. So before reviewing this JAMA Network Open study’s results, keep in mind the caveat that those who have undergone treadmill testing aren’t necessarily representative of the general population.

For this study, the research team classified each patient into one of the following performance categories based on how they did on the treadmill compared to everyone else: low (<25th percentile), below average (25th-49th percentile), above average (50th-74th percentile), high (75th-97.6th percentile), and elite (≥97.7th percentile). The average age of the patients was 53.4 years with a standard deviation of 12.6 years. Over half (59.2%) were male. During the follow-up period, 13,637 had died.

Using statistical analyses, the team found that worse performance on the exercise treadmill test seemed to be associated with a higher likelihood of dying during the study period, at least to some degree. For example, low performers on the test were over 5 times as likely to have died than elite performers, and below average performer were 1.41 times as likely compared above average performers. The association was not statistically significant when comparing all combinations of performance categories. However, some of the increased risks were comparable to or greater than those associated with smoking (smokers were to 41% more likely to have died than non-smokers), having coronary artery disease (29% more likely), and having diabetes (40% more likely).

This does not mean that if you are a triathlete, you should feel free to puff away at cigarettes. The study still suggests that smoking is associated with a significantly higher risk of earlier death. It just says that being a couch potato may be even worse.

Of course, this study has many limitations. Such a study essentially tries to look back and determine what happened in the past. But not in a detailed, look at each person closely type of way. Instead it tosses everyone into a big bucket and searches for general trends and associations. Such a gimish can overlook key individual differences. For example, someone who performs on a treadmill test at an elite level may have very different life and health circumstances compared to someone who tests at a low level. The elite performer may have more friends, a better work situation, more spending money, and less of a need to cement his or her head in a microwave. So take any such retrospective cohort study with a grain of salt. Actually don’t add more salt to your diet. Take it with a grain of kale.

Nonetheless, it wouldn’t be a stretch to say that being out of shape raises your risk of dying early and that exercising is one of the best things that you can do to try to live longer. Being in good cardiovascular shape means that your blood can circulate more extensively to provide nutrients and oxygen to your various body parts and clear away harmful substances. It can help maintain a health weight and improve your metabolism. It can help your organs, muscles, and bones stay strong and function well. It can also improve your mental health, make you feel better about yourself, which in turn can help many other parts of your life. This way you don’t have to walk around the campus grounds singing about throwing your “life away on a dream that won’t come true.” These are just a sample of the many, many benefits of exercise.

Failing to get enough exercise may not be the worst thing that you could do. But sorry, Rizzo, it is probably worse than crying in front of Kenickie Murdoch.