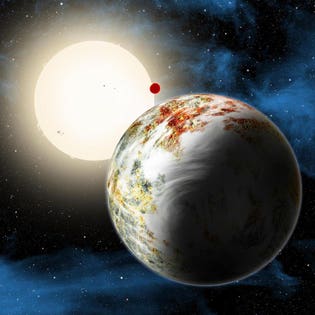 Once, this was an astronomical axiom, perhaps even a cosmic holy grail:

Find lots of oxygen in the sky of an alien world, and life is likely somewhere below.

But now, a new study in the journal Astrobiology says that’s not necessarily so.

Granted, the old axiom still make sense, at least on Earth. Here, atmospheric oxygen exists because living things—cyanobacteria, plants—put it there; without biology, there’s no oxygen.

But plenty of planets might have oxygen without life—even worlds with “ten times the atmospheric oxygen Earth has,” says Meadows.

Here’s one scenario: Red dwarfs, the most common stars in the galaxy, are often “super-luminous” when young, says Meadows—so hot they could “vaporize” the ocean of a nearby planet, literally “boiling it off.”

Hydrogen, the lightest element in the universe, eventually escapes into space; the oxygen stays.

The result: Lots of oxygen, but a dead world.

To astronomers looking for extraterrestrial life, that’s a classic “false-positive,” says Meadows. “These planets might have oxygen in their atmospheres only because they lost water early on.”

But it works the other way too—false-negatives. “When you have life, but you can’t tell it’s there,” says Meadows.

The perfect example of that: primordial Earth.

Our planet is approximately five billion years old. Although no one is certain, most scientists now believe primitive life began during the first billion; atmospheric oxygen was undetectable until the last billion.

“That’s a three billion year gap,” says Meadows. “For 80 percent of its history, Earth didn’t have a strong signal of oxygen in the air.”

The bottom line: Finding oxygen on another world would be “incredibly interesting,” she says. “But it’s just the first step in the process.”

And one footnote: Those so-called “false-negatives” could well total in the billions. Holy grail or not, that alone is surely enough to make any scientist’s cup runneth over.

Vaccines — lessons from three centuries of protest
From Butts To Bricks, This Is The Plan To Recycle Cigarettes Into Construction Materials
Who gets a COVID vaccine first? Access plans are taking shape
Elon Musk says Tesla deliveries will rise 30% to 40% in 2020, touts new battery tech
Plug-in hybrids called a ‘wolf in sheep’s clothing’ as study claims emissions are higher than thought