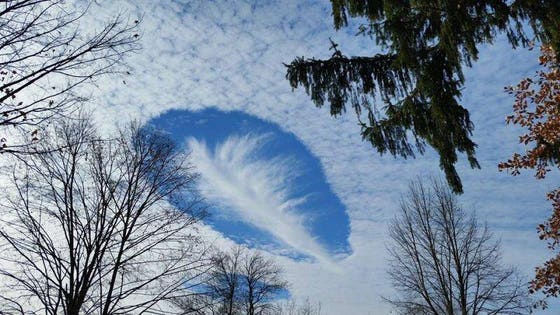 While tempted to mention Chicken Little because of the title chosen, I decided to pass and move on. On most Thursday mornings before I head to the University of Georgia, I take the trash and recycle bins to the curb. On this particular morning, I looked up at the sky as I often do. As an atmospheric scientist, something immediately caught my eye. It was the presence of a “hole punch” cloud. They are also called “fall streak” clouds or “fall streak” holes. I quickly ran back to the house and grabbed my camera. I have long been familiar with them but had never one with my own eyes. What are these strange ‘hole punch” clouds anyhow?

The National Weather Service-Lacrosse, Wisconsin office has a good answer to that question so there is no reason to reinvent the wheel. According to the website, a fall streak hole or “hole punch” cloud forms when,

The concept of liquid water existing at temperatures colder than 32 degrees F may seem weird to you, but it is something quite familiar to most meteorologists or atmospheric scientists. Water with relative few bacterial, pollution, or natural particles is most likely to experience the process of “supercooling.” Airplanes often produce aerodynamic contrails. You know…those clouds that some conspiracy theorists claim are being used to control the weather or our minds. They are not “chemtrails,” but clouds (“contrails”) created as moist air cools and condensation happens because of lowered pressure. Atmospheric conditions supportive of contrails are fertile ground for the formation of fall streak or “hole punch” clouds. The streak of “clouds”  in the middle of the hole are composed of ice and is the actual “fall streak.”

The fall streak cloud that I photographed (above) was the more typical “hole” type. However under certain atmospheric conditions, a “canal cloud” can be produced. Canal clouds are longer and thinner.  According to NASA, “the thickness of the cloud layer, the air temperature, and the degree of horizontal wind shear” determines the size and orientation of the cloud feature. John Trostel is a colleague and friend of mine who works at the Georgia Tech Research Institute. Trostel, a principal research scientist, also lives in the Atlanta area. He posted the picture below on the same day that I photographed my picture. He captured a canal cloud.

This week was quite optimal for “hole punch” or canal clouds over Georgia. The National Weather Service Peachtree City posted satellite imagery on its Facebook page on the day prior to my observation. The weather satellite imagery (below) clearly indicates the presence of several “hole punch clouds” over central Georgia. With cool morning temperatures and middle level cloud decks, the atmosphere was conducive for these types of clouds. Additionally, the Atlanta airport is one of the busiest in the world so there are plenty of ascending and descending airplanes in the area. Air expands and cools (this is called adiabatic cooling) as it moves over airplane wings. This slight cooling is just enough to initiate the freezing process to produce the ice-laden fall streaks and resulting evaporation of the supercooled droplets around them.