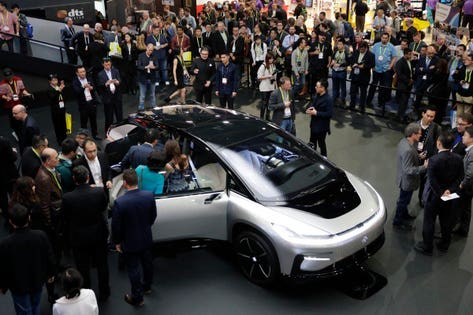 After more than a year of financial turmoil and executive turnover, China-backed luxury electric-car maker Faraday Future has secured a degree of stability with a new main shareholder and U.S. Treasury Department approval of a much-needed $2 billion funding deal.

Evergrande Health Industry Group, a Hong Kong-based unit of Chinese billionaire Hui Ka Yan’s Evergrande Group, acquired a controlling 45% stake in Faraday Future for about $860 million (HK$6.75 billion) through the transfer of the Season Smart Limited partnership created last year to aid Faraday, Evergrande said in a June 25 Hong Kong Stock Exchange filing. Faraday’s original investors retain a combined 33% stake, with the remaining 22% of company equity to be distributed to employees as part of an incentive program, according to the filing.

Los Angeles-based Faraday, headquartered in a building that was once part of Nissan’s U.S. West Coast campus, also said its $2 billion equity funding deal arranged in November got a green light from Treasury’s Committee on Foreign Investment in the United States.

“This marks a major milestone for FF to achieve its vision of delivering a clean, intelligent, connected and shared global mobility ecosystem,” the company said in a statement. Additionally, Faraday founder Yueting Jia, who goes by YT, is now officially its CEO.

The Evergrande deal includes an additional $1.2 billion to be invested in two $600 million installments, at the end of 2019 and 2020, according to the filing. Whether the new ownership structure and much-needed funding can turn Faraday Future into the would-be Tesla rival YT had hoped to create remains to be seen.

After a splashy demonstration of its flagship FF 91 model at CES 2017 in Las Vegas, a cash shortage forced Faraday to mothball a $1 billion, 3 million-square-foot auto-assembly plant in Nevada. However, this month the company said it’s moving forward with a smaller facility in Hanford, California, that is to be ready to build the battery-powered FF 91 by the end of the year.

In January the company also sued its former CFO and CTO, claiming theft of intellectual property and the poaching of at least 20 former Faraday Future employees, for a competing EV startup they founded in December.

At the same time, YT is contending with his own legal problems. He has debt and tax issues stemming from the troubled LeEco conglomerate he created, and so far hasn’t complied with a deadline set by Chinese securities regulators to return to resolve those matters. Instead, he’s remained in the U.S. to focus on FF 91 production, according to the South China Morning Post. Chinese media reports said this month that YT is on a list that bars people with outstanding tax issues in that country from luxury air and rail travel.

If delivered as promised, the FF 91, a crossover wagon that would compete with Tesla’s Model X SUV and the new Jaguar I-Pace, could be an attention-grabbing entry. The company vows 0-60 mph acceleration in 2.39 seconds and up to 378 miles per charge. The vehicle would also come to market with features such as facial recognition technology and an array of sophisticated sensors, including laser Lidar, to enable autonomous driving and a “valet” self-parking feature.

Yet the company also faces a host of competitors in the advanced EV market beyond Tesla, including China-backed Byton, NIO and essentially every major European luxury auto brand, all of whom have their own next-generation models in the works.

But for a company that appeared to be on life support not long ago, Monday’s news looks like a major shot in the arm.

For the first time, an ‘ultra-hot Neptune’ has been discovered orbiting a Sun-like star
China claims it will be ‘carbon neutral’ by the year 2060
This Week’s Equal Night, Equal Light: What Is Equinox, How Does It Work And Why Does It Matter To You?
An asteroid will get closer to Earth than the Moon this Thursday, but don’t panic
Wildfire Smoke: Here Is Another Reason More N95 Face Masks Are Needed