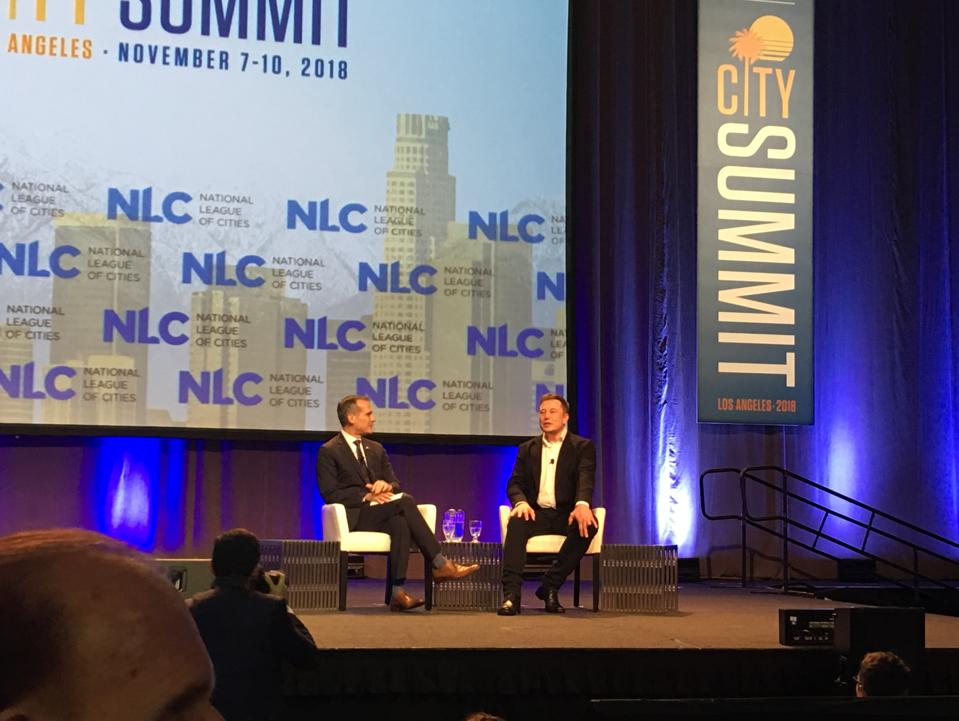 Elon Musk’s big ideas usually involve revolutions in clean power, electric cars, Mars colonies and high-speed tube travel, but the billionaire entrepreneur wants U.S. cities to know that when it comes to the Boring Company he has a practical side too. In fact, his new tunnel-oriented endeavor will do a lot more than just make vacuum-tube Hyperloops — it’ll build your new sewer lines.

Musk made his pitch before an audience of 3,800 mayors and city officials from across the U.S. in Los Angeles at the National League of Cities’ 2018 City Summit on Thursday in a chat with L.A. Mayor Eric Garcetti. While the Boring Co.’s first underground rapid transportation system could be operational in four years, he also wants it to provide less glamorous services.

“The Boring Co. is also going to do tunneling for like water transport, sewage, electrical,” he told the audience. “We’re not going to turn our noses up at sewage tunnels. We’re happy to do that too.”

The Boring Co.’s first test project opens next month in Hawthorne, the Los Angeles suburb that’s home to Musk’s SpaceX, with a Dec. 10 party that he and Garcetti invited the officials to attend. After that Musk is planning a tunnel that in a few years could be whisking passengers to L.A.’s Dodger Stadium via underground transit pods, a high-speed subterranean connection from downtown Chicago to O’Hare Airport, as well as several potential transit projects in East Coast cities.

The cost and timing of those projects — which involve using electric sleds traveling at speeds of over 100 miles per hour that transport cars or multi-passenger transit pods — isn’t clear, but cheaper infrastructure services strike some as a smart use of new tunneling tech.

“Moving cars underground in cities is expensive, but having power, water, sewer, communications and other utilities underground in cities is essential. And a lot of these systems are old and in bad shape,” said Constantine Samaras, assistant professor of civil and environmental engineering at Carnegie Mellon University. “Often fixing utilities means cutting open the street and disrupting traffic.”

“If the Boring Co. can use their tunneling technology to make it faster and cheaper to install and upgrade underground utilities, it will be a big benefit to cities,” he said.

Musk, who previously said the Boring Co. may get into the brick business by converting excavated soil and rock into high-strength building materials, no doubt found the conference a particularly appropriate environment to pitch his newest enterprise.

“We’re looking to revolutionary implementations of advanced tunneling and I think we can really transform the transportation network of America, but key to that is the support cities,” he said.

He may have already found his first customer for low-cost sewer tunneling, based on Garcetti’s interest.

“Maybe we’ll get the first sewage tunnel from the Boring Co.?” Garcetti asked.

“Should I hit you up on Twitter? Is that the best way?” the mayor asked.

“Yeah, sure. Why not? Or contact the Boring Co.” Musk said.