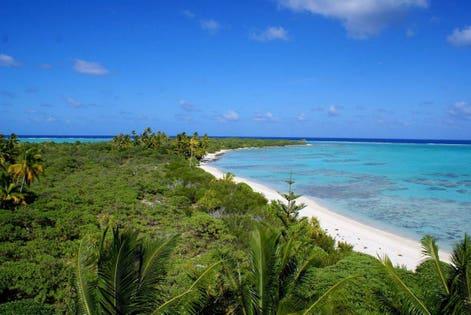 Experiencing a total solar eclipse is one thing. So how about seeing one from a tiny tropical atoll in the South Pacific?

In July 2019 a dramatic total solar eclipse will plunge parts of the southern hemisphere into darkness for a few minutes, just as happened on August 21, 2017 in 14 U.S. states. In 2019, most eclipse-chasers are headed for Chile or Argentina, thinking them the only places that the Path of Totality will cross. From there, a spectacular pre-sunset totality will be visible. However, there is one other choice for land-lubbers.

Just announced by Pitcairn Islands Tourism North America is the Pitcairn Islands 2019 Solar Eclipse voyage, a trip that which will begin in Tahiti and depart from Mangareva, French Polynesia on June 25, 2019. Over two weeks the voyage onboard the island’s new supply ship, the MV Bravo Supporter, will call in at some of the world’s most remote island outposts.

[Note: I want to stress that I have no financial relationship whatsoever with Pitcairn Islands Tourism, and merely want to share details of this one-off trip that I think intrepid eclipse-chasers should be aware of]

First, it will call at Pitcairn Island (population 50), famous for being the setting for the Mutiny on the Bounty. Then Henderson Island, which UNESCO describes as ‘the world’s best remaining examples of an elevated coral atoll ecosystem.’

Finally, on July 2, the trip will make land at the coconut palms-covered Oeno Island – 89 miles northwest of Pitcairn Island – for the total solar eclipse. That will occur at 10:23 a.m. and last for 2 minutes 51 seconds. The ship will then return to Mangareva, French Polynesia on July 9, 2019.

The tour will be led by Emeritus Professor Dr. John Hearnshaw of Canterbury University in New Zealand, who works closely with the Aoraki McKenzie Dark Sky Reserve in New Zealand.

While in the Pitcairn Islands, guests will go stargazing. The island, which is just 2 miles by a mile wide and surrounded by a vast Marine Protected Area, hopes to soon become a Dark Sky Sanctuary, of which there are only four in the world. The island should be at its very darkest for the Pitcairn Islands 2019 Solar Eclipse voyage since it will happen at the height of the southern hemisphere’s winter when clouds are less frequent.

Since a total solar eclipse is also the very definition of a New Moon, the skies will be dark and moonless, too.

Revealed: The Secret Techniques You Need To See (And Survive) The Northern Lights

Was Einstein Wrong? Tomorrow Begins A Seven-Year Quest To Mercury To Refine Spacetime

German chipmaker Infineon prepared to handle increased competition from China, CEO says
China is quietly preparing for November launch of the Chang’e-5 lunar sample return mission
Raymond: A continuing resolution is problematic for the Space Force
Bridenstine hints Artemis 3 could land near Apollo site
Smoky Air Is Ruff On Pets, Too. Here’s How To Protect Them