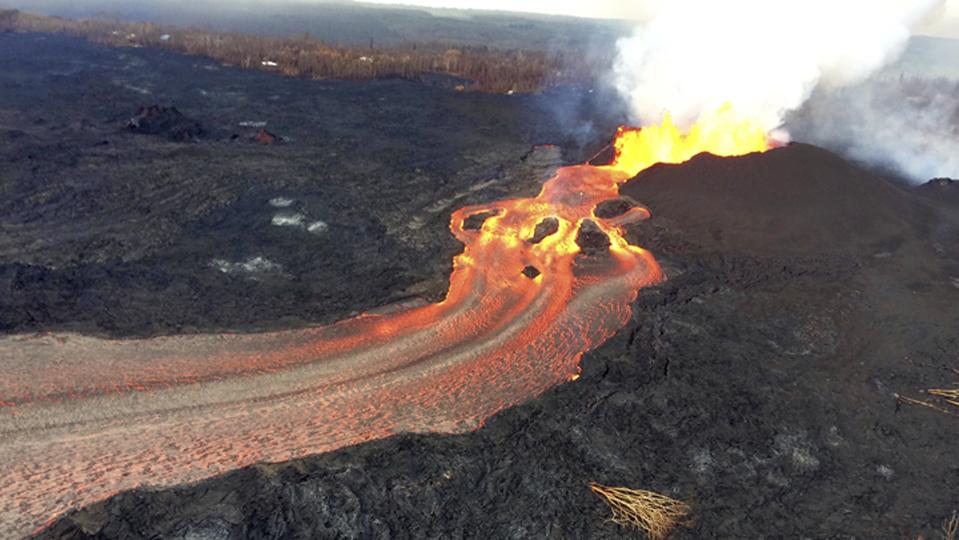 If it isn’t obvious already, there’s one more reason not to go near the lava that has already covered nearly ten square miles of Kilauea Volcano’s Eastern Rift Zone on the southeastern corner of Hawaii’s Big Island: you might not be able to out-run it.

The Hawaiian Volcano Observatory reports that “standing waves” were visible in a channel of lava flowing at speeds up to 17 miles per hour.  Of course, the eruption slows down as it spreads out, forming so-called “pahoehoe” flows that creep along. But it’s important to know just how fast the stuff can move because there’s no reason a channel can’t suddenly change.

Running at 17 mph would be a pretty fast sprint for a person that’s in good athletic shape. You could cover a 100 meter dash in about 13 seconds at that rate, provided you’re on a nice flat and even track. So to be able to escape a close-range, full-speed lava flow coming right at you, you’d need to run at full-speed the other direction and your full speed had better be on par with the fastest people you know.

The fast channel seen by the USGS is fed by fissure 8, one of around two dozen fissures that have erupted with lava since the beginning of May. In recent weeks, fissure 8 has been the center of activity, sending flows to the ocean where they have completely filled in once picturesque Kapoho Bay.

So far over 500 homes have been lost to lava, which also threatens other parts of the island with potentially dangerous emissions. The National Weather Service says winds could push volcanic smog or “vog” into the interior and the nearby college town of Hilo this week.

The Kilauea eruption has been ongoing for nearly seven weeks now and it’s unclear how much longer it could last. Another rift zone eruption in 1955 lasted three months before ending suddenly. Lava from this current eruption has already covered more ground than the 1955 event.

To jack in to my brain and get more on the latest in science, tech and innovation, follow me here on Forbes, as well as on Twitter @ericcmack and on Google+.