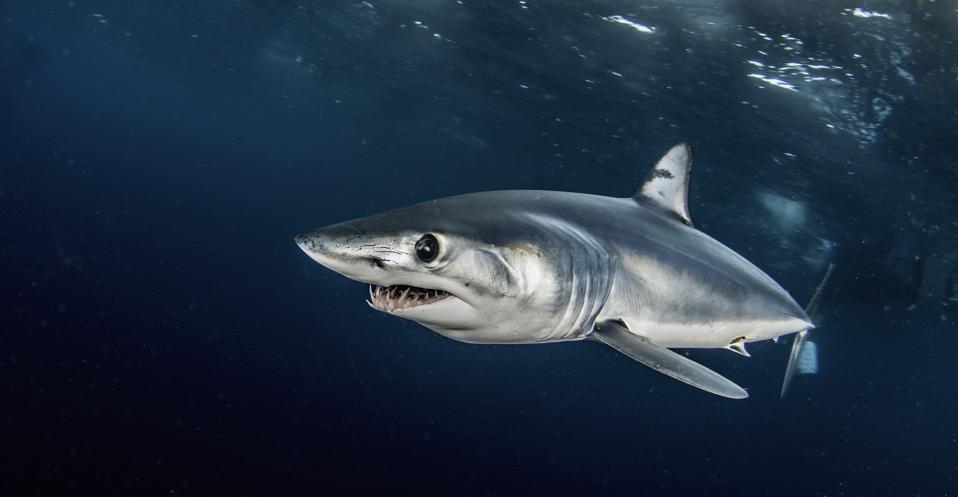 “Highly mobile species [such as sharks] create a unique management problem given their wide movement ranges, as they often cross many jurisdictional boundaries, exposing them to varying degrees of protection,” said postdoctoral research associate Dr. Kesley Banks of the Harte Research Institute for Gulf of Mexico Studies as she motioned to the map on the computer showing different shark movement tracks. “Given their […] movement over very large spatial scales, identifying their particular habitat requirements can be very challenging.”

As a shark scientist, you often hear that it is so easy to study them because ‘there is so much ocean,’ but that is exactly why it is so hard to study these migratory animals – there is so much ocean! Even the largest of sharks is small compared to the considerable scale of this watery ecosystem, and scientists can go days without seeing the species they are focused on since global abundance of oceanic sharks and rays has declined by 71%.

Like the sharks who stick close to shore, oceanic sharks have essential roles in our marine ecosystems yet scientists continue to have many unanswered questions regarding their life history such as discovering where they mate or give birth. One such species is the shortfin mako shark (Isurus oxyrinchus), made famous due to their fast speed that can end in acrobatic leaps into the air that have been captured by many wildlife documentaries. These speedy pelagic predators have been observed in tropical and temperate waters circumglobally and have been identified as vulnerable to overexploitation, like many of their relatives. In 2017, a study based out of the Atlantic Ocean showed that 30% of their tagged juvenile mako sharks were captured in fisheries, suggesting that mako shark population here was likely being overexploited. The International Commission for the Conservation of Atlantic Tunas (ICCAT), which overseas shark stocks, confirmed the grim announcement by publicizing that the North Atlantic stock was overfished and undergoing overfishing. The following year, the International Union for Conservation of Nature (IUCN) Red List added this species as “endangered” globally due to their declining populations.

Sharks have long lifespans, are late to mature, and have long reproductive cycles… all characteristics that make them highly vulnerable to exploitation when not properly managed. Yet management for these sharks has thus far been hindered by the sparse biological information scientists have on them, including data on their movements and habitat ecology. “Until recently, such data for the western North Atlantic (WNA) had been primarily informed by fisheries landings and conventional tag-recapture studies,” explain the authors of a new study that looks at seasonal movement patterns of shortfin mako sharks in the Gulf of Mexico, noting that even these fisheries-dependent studies numerous have limitations such as low recovery rates and biased sampling efforts.

“Effective management of this species can benefit from detailed information on their movements and habitat use, which is lacking [for shortfin makos], especially in the Gulf of Mexico, a potential mating and parturition ground,” said Banks. Thus, her team decided to use satellite telemetry to track the movements of these predators in the western Gulf of Mexico between 2016 and 2020. They tagged nine mature shortfin mako sharks off the coast of Texas, in contrast to previous studies that primarily tagged juveniles. Attaching SPOT satellite tags to five males and four females, the researchers tracked the individuals for anywhere from 10 to 887 days with the expensive piece of equipment on their dorsal fin relaying back various data information such as their coordinates, speed, and depth of ocean floor. Not only were the sharks mature, but the two females seem to have had recent (fresh with no healing or scarring) bite marks which the group believes could suggest mating or fighting behaviors were occurring in this region.

“Our research demonstrated that the Gulf may be important habitat for this declining species, as the females we tagged do not migrate out of the Gulf but rather remain here year round. This opens up questions such as could males be entering the Gulf to mate with our resident females? Does the Gulf provide a pupping ground for females?” said Banks. “Contrastly, our males make these long migration movements to different areas including the New England area and the Caribbean Sea. This subjects them to a various fishing pressures and regulations, meaning even if this species is protected in some exclusive economic zones (EEZs), they may not be in others. Since these sharks make large movements through many EEZs, the protection of this species would need international cooperation and management.”

Mako sharks have been shown to use a variety of habitats during their long-distance migrations, including open-ocean and more shallow waters along the continental shelf. This pattern was seen with the tagged individuals for this study, occurring in the open ocean during transiting periods and in shallower ambient depths (such as the continental shelf) during periods of proposed ‘residency,’ a phenomenon observed for other species of sharks. But why would a big mako go into the shallows? Scientists believe that the shallower, continental shelf habitat are likely attractive to these sharks – and many other oceanic shark species – due to the abundance and variety of prey available here compared to the open-ocean which is often likened to a desert because “there is so much swaths of nothing.”

Yet, it is in these large swaths where sharks are being caught at an unsustainable rate that puts many in the cross hairs of teetering closer to extinction. The new information found in this study on the movement ecology for mako sharks in this region, especially for mature individuals that have been historically underrepresented, showcase that additional tagging efforts are needed here to better understand the patterns the researchers have uncovered. “Unfortunately, many countries cannot agree on what protections are required for this species,” lamented Banks. “It is difficult to conserve and protect a species when we know little about it. Until recently, even migration patterns of these sharks were unknown. Scientists are just now beginning to determine where these sharks are traveling to and when. However, many questions are still unanswered.”