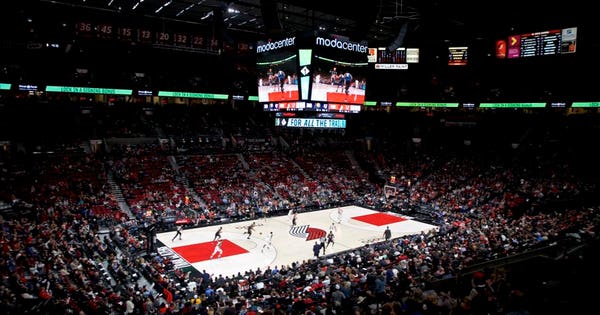 One of the people affected by the Clark County, Washington, measles outbreak attended a Portland Trailblazers game at the Moda Center on January 11. Pictured here is the arena on Thursday, Jan. 18, 2018. (AP Photo/Craig Mitchelldyer)

Look at what made the World Health Organization’s (WHO’s) just-released list of “10 threats to global health in 2019.” Right alongside the Ebola virus, HIV, antibiotic-resistant bacteria, pollution, and non-communicable diseases such as obesity, diabetes, and heart disease is “vaccine hesitancy.” That’s right, one of the biggest threats is not a disease, not the lack of an prevention measure or a treatment, and not the lack of resources.

You see, “vaccine hesitancy” is not vaccines clinging on to the syringe or container and saying, “I don’t want to go and help protect people against a disease.” No, “vaccine hesitancy,” according to the WHO is “delay in acceptance or refusal of vaccines despite availability of vaccination services.” In other words, it is people questioning whether to get vaccinated or more often whether children should be vaccinated, despite the abundance of scientific evidence showing the effectiveness of vaccines in preventing disease, despite the lack of proven alternatives, and despite experts around the world urging people to get vaccinated. In the same vein, “shower hesitancy” would be the unwillingness to take a shower (or have your children shower) even though those around you are holding their noses and leaving soap bars and towels next to you.

By the way, here’s the entire WHO list in no particular order:

The fact that vaccine hesitancy made the WHO’s list of 10 is a sad statement of what’s happening in our world, particularly in the U.S. and the U.K., the epicenters of the anti-vaccination movement. The anti-vaccination movement threatens to reverse decades of progress, help other diseases creep back on to the WHO’s list, and deter the world from appropriately dealing with other threats currently on the list such as global influenza pandemics.

Case in point. “Vaccine hesitancy” is the reason why measles has made a reappearance in the U.S. Remember back in 2000 when measles was practically non-existent in the U.S.? Well, those were the days my friend, and you may have that they would never end. But they did, and “vaccine hesitancy” has essentially said, “come on virus, come on back.” That’s why measles cases and measles outbreaks now regularly make the news.

For example, on Friday, officials in Clark County, Washington, declared a public health emergency due to 19 recent confirmed measles cases. All but one of these cases have been children. Oh, by the way, at least 16 of the 19 people in Clark County who got the measles had never received the measles vaccine. What were the parents of the 16 people thinking? That supplements, twisting your body around like a pretzel, or taking some potion would somehow would prevent the measles? If you don’t get the vaccine, you will not be protected against the measles. Funny how cause and effect works.

Plus, the measles virus is like a really obnoxious guy who doesn’t understand boundaries. It can spread quickly and effectively, with one infectious person easily infecting 11 to 20 other people who have not been vaccinated. One of the Clark County measles cases had attended a January 11th Portland Trailblazers game, held in the Moda Center in Portland, Oregon. That’s over 19,000 people in a building with a highly contagious virus. So hello Portland, Oregon, meet the measles virus.

“Vaccine hesitancy” making the WHO’s list and measles outbreaks also means that the public health world needs to change how it is dealing with the pseudoscience anti-vaccination propaganda that’s been spreading. The anti-vaccination movement is not just some concerned parents or people interested in having a conversation. Otherwise, there would be more of a push to bolster the funding and resources of the Food and Drug Administration (FDA), the Centers for Disease Control and Prevention (CDC), and the National Institutes of Health (NIH) so that more monitoring can be done and more studies can be conducted. There would be more of a call for scientific discussions with the understanding that telling people not to vaccinate without providing a viable scientifically-supported alternative is irresponsible.

Instead, there may be vested interests and hidden agendas in pushing the anti-vaccination mantra as a front. For example, Meghan Bridgid Moran, PhD, an assistant professor in the Department of Health, Behavior and Society at the Johns Hopkins Bloomberg School of Public Health, wrote in Time about about her team’s analysis of 480 anti-vaccination websites. Beside 67% of the web sites using “pseudo-scientific evidence to support their claims,” she indicated that “nearly 79% of these sites say they don’t trust the government, and 42% advocate distrust of health-care practitioners.” She also indicated that “‘natural treatments’ and ‘homeopathic remedies’ are held high and offered up as bona fide vaccine alternatives.”

As another example, as I wrote previously for Forbes, a study published in the American Journal of Public Health revealed that Russian bots and the Internet Research Agency, which is backed by the Russian government, have been propagating anti-vaccination messages on Twitter.

Then, there are the anonymous anti-vaccination messages on social media that have no clear source. Contrast this with the wide range of real doctors, researchers, and other scientists who are willing to clearly put their names and list their experience and qualifications on messages that support vaccination. After all, why be anonymous when you believe that you are advancing facts?

Thus, the question is who stands to gain the most by discrediting the government, health-care practitioners, and vaccines that prevent infectious diseases? How about those trying to sell “alternative treatments” that may not be effective and may even be dangerous? Vampires are afraid of the light. Similarly, those hawking bogus remedies may be afraid of science and regulation, which help provide light to what is unknown.

It is time to change the approach to the anti-vaccination movement. If you have a disagreement with someone, you have to decide whether that person is genuinely interested in solving a problem and resolving differences rather than advancing an insidious agenda. Look for signs that the latter is the case such the person simply trying to discredit you, using emotional arguments and distractions, and advancing ideas inconsistent with the facts. If an approach hasn’t worked in the past, it is time to change the approach. As former President George W. Bush once said, “fool me once, shame on, shame on you. Fool me, you can’t get fooled again.”

How You Can Soon Be One Of The Select Few To See North America’s First Eclipse Of The Sun Since 2017
SpaceX launches Turksat 5A
Ice bathes Pluto in a blue haze
75 Years Ago, America’s First Moon Shot Used Radio Waves
Arianespace seeks greater support from European governments