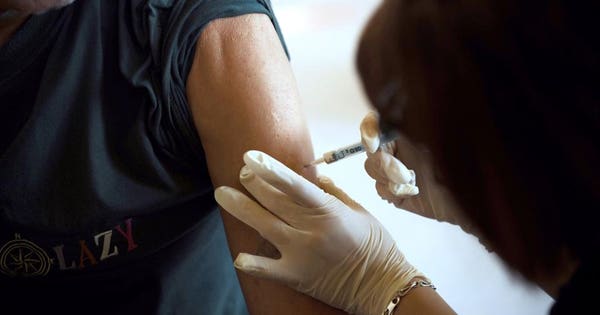 Jonas Salk gained worldwide fame for his polio vaccine; Louis Pasteur is remembered, among other things, for developing a vaccine against rabies, and Edward Jenner’s name is forever connected to vaccination against smallpox. But history barely remembers the microbiologist who, arguably, saved more lives than any other doctor or medical researcher of the 20th century (and who continues to save millions every year despite having been dead since 2005). His name is Maurice R. Hilleman, and during his 40-year career, he developed over 40 human and animal vaccines (that’s roughly a vaccine per year, for those of you playing at home), including the ones for chickenpox, hepatitis A and B, measles, meningitis, mumps, rubella, and several strains of the flu virus. The measles vaccine alone prevents an estimated 1 million deaths from the once-common disease every year.

And if you got your measles, mumps, and rubella vaccines in the same shot, with a booster to follow, you can thank Hilleman for sparing you a few extra needle-sticks in the process of protecting you against an untimely death. Of course, the renowned microbiologist had some unexpected help with the mumps vaccine — from his daughter, who caught the disease in 1963. He used a culture from his sick daughter’s throat to isolate the virus and produce a weakened strain that activates the immune system to produce antibodies without actually making you sick. That strain, named the Jeryl Lynn strain, is the basis for today’s mumps vaccine. It’s nice to think that she got lots of ice cream in return for her help.

Hilleman also helped discover the processes of antigenic shift (which is how different strains of a virus can combine to form a new strain) and antigenic drift (which is the more gradual mutation of a virus over time). Together, shift and drift are the reason that last year’s flu vaccine probably won’t do you much good against this year’s strain, because the new strain will have different versions of molecules called antigens, which are what vaccines train your immune system to recognize as a threat. Without an updated vaccine, new antigens can catch your immune system unprepared. Understanding shift and drift helps public health officials monitor for new strains of flu and prepare vaccines in advance.

That’s a process Hilleman and his colleagues at Walter Reed Army Institute of Research pioneered in 1957, when he got word of an outbreak of flue in Hong Kong that looked ready to swell into a pandemic. Hilleman had a hunch that this strain was different than the ones he’d seen previouly, and he spent a week and a half with a fellow researcher chasing down the new strain of flu. Their efforts helped U.S. public health officials prepare 40 million doses of vaccine before the virus reached the U.S. It was still a deadly outbreak, killing over 69,000 people, but without disease surveillance and preparation, it could have been drastically worse.

In 1960, Hilleman and colleague Ben Sweet discovered simian vacuolating virus 40, or SV40, which drastically increases the risk of cancer in its host. More alarmingly, they discovered that it had contaminated between 10% andd 30% of polio vaccines in the U.S., and a large number of children and adults had been infected between 1955 and 1963. That discovery, combined with Bernice Eddy’s discovery in 1962 that SV40 can cause cancer, played a role in the switch to the oral polio vaccine developed by Albert Sabin.

That’s an impressive career for the eighth child of a less-than-affluent farming family in a remote town in Montana at the turn of the 20th century, who grew up caring for chickens on the family farm and got in trouble for reading Charles Darwin’s On the Origin of Species in church.

“Well, looking back on one’s lifetime, you say, ‘Gee, what have I done? Have I done enough for the world to justify having been here?” he told a videographer for Children’s Hospital of Philadelphia not long before his death in 2005, according to the Washington Post. “I would do it over again because there’s great joy in being useful, and that’s the satisfaction that you get out of it. Other than that, it’s the quest of science and winning a battle over these damn bugs.”

Xage Security prepares U.S. Space Force cyber strategy
The ARM Nvidia Deal – A View From A Cambridge Founder Who Has Benefitted From ARM’s Success
New York and Boston maintain their lead
Egyptian authorities just found 14 more coffins that have been sealed for 2,500 years
The Deadliest Venomous Animals In The World