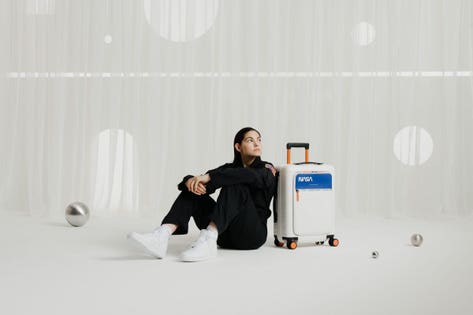 Alyssa Carson, the world’s youngest astronaut-in-training, has created a line of space luggage with Horizn Studios, a British-based travel brand.

There aren’t many teenagers like Alyssa Carson from Baton Rouge, Louisiana. At the age of 18, she is the world’s youngest astronaut-in-training and already has three TEDx Talks under her space belt.  Carson has also teamed up with Horizn Studios, a British-based travel brand, to help create the first-ever line of space luggage, as well as a limited-edition smart suitcase that will be released on July 19, timed to the 50th anniversary of the Apollo 11 moon landing. If Carson has her way, this wunderkind will be the first human to step foot on Mars.

Carson set her sights on space when she was a mere 3-years-old, after seeing The Backyardigans, a cartoon about a group of friends who went on imaginary adventures. “They had an episode called Mission to Mars and were asking questions about space, about Mars, if people are already on Mars,” says Carson, who says that while her family doesn’t have a background in science, they supported her curiosity. “My dad remembers me coming and asking him questions about space and Mars. He told me a little about the moon landings and it sparked an interest.”

READ MORE: “This 21-Year-Old Woman Claims She’s The Youngest Person To Travel To Every Country”

After Carson’s father took her to her first space camp when she was 7, she was hooked. She has attended 19 space camps—including places like Turkey and Canada—and is the only person to have completed the NASA Passport program, having visited all 14 sites across nine states. “Space camp was the best opportunity for me to learn more about space and to get more involved in it,” she says. “I would ride simulators, build rockets, learn aviation, practice robitics.”

Carson’s passion paid off. When she was 12, NASA invited her to discuss future missions to Mars as part of the MER (Mars Exploration Rovers) 10 panel in Washington D.C., commemorating 10 years of roving across the Red Planet. At age 13, she did her first TEDx Talk in Greece. And at 15, Carson became the youngest person to be accepted into the prestigious Advanced PoSSUM Space Academy, where she received the sub-orbital space certification, officially making her certified to venture into the cosmos.

Another view of the Limited NASA Edition cabin luggage.

Add to that an impressive social media following of more than 136,000 followers on Instagram and over 83,000 on Facebook, and it’s no wonder Horizn Studios invited Carson to team up with their designers and engineers to create Horizn ONE, the world’s first luggage for space travel. ”It was a match made in heaven,” says Carson, who tapped into her astronaut training and scientific expertise to help develop visual prototypes. This trailblazing luggage will fold up, clean laundry and even come with a smart screen that will enable visitors on Mars to stream videos.

“It’s the ultimate futuristic luggage—geared toward space tourism and commercial space flights once we start bringing the general public into space,” says Carson, whose call name is “Blueberry.” But you’ll need to wait until 2030 to purchase the first Horizn ONE space luggage, which won’t be ready until we get closer to the first missions to Mars. And you’ll need to have deep pockets. Horizn projects that its space luggage will retail for over $50,000—though the company points out that this is a relative bargain, considering that a flight to the International Space Station with NASA costs upwards of $46 million.

A visual prototype of Horizn ONE, the world’s first space luggage, due out in 2030.

In the meantime, Horizn is releasing Carson’s first creation for the general public—the Limited NASA Edition Cabin Trolley—which has a more down-to-earth price of $810. The bag has a built-in smart charger, 360-degree spinner wheels and an aerospace-grade polycarbonate hard shell. It comes in Apollo 11-inspired white and has astronaut-inspired orange and blue accents. The sleek bag has been given the seal of approval by NASA and features its official logo. Owners also get a year of free access to Horizn GO, a personal trip-planning assistant.

So what do you do after creating the world’s first space luggage? Carson just graduated from high school in May and is headed to Florida Tech to study astrobiology and continue on her mission to Mars. She’s also excited to keep inspiring other young people to reach for the stars. “Whatever your dream may be, no matter how crazy it is, you should follow it,” says Carson.

A credit for Carson—whose call name is “Blueberry”—on the Horizn ONE.

In fact, inspiring the Mars Generation was the theme of Carson’s second TEDx Talk in Bucharest, where she focused on “the importance of following your dreams and the importance of supporting others with their dreams.” Her third TEDx Talk was centered around changing the paradigm for young people. “I basically stated that once kids have a dream, they can actually start working toward that dream,” Carson says. “They don’t have to wait until college to start researching what they want to do. They can actually start accomplishing things at an early age.”

As for young girls who want to follow in her footsteps, Carson advises looking into the STEM field. And most of all: “Never let anyone take your dream away from you.”

A close-up of Carson.

• “Quit Your Job And Live In The Caribbean: 5 Cheapest Dream Islands”

Oil gains as hurricane shuts U.S. output, stockpiles fall
Virgin Orbit asks OneWeb bankruptcy court to mandate payment for canceled launches
The ARM Nvidia Deal – A View From A Cambridge Founder Who Has Benefitted From ARM’s Success
Energy giant Neste sees a ‘K-shaped’ recovery for its business, CEO says
Why some of the world’s zippiest birds go stiff and cold every night