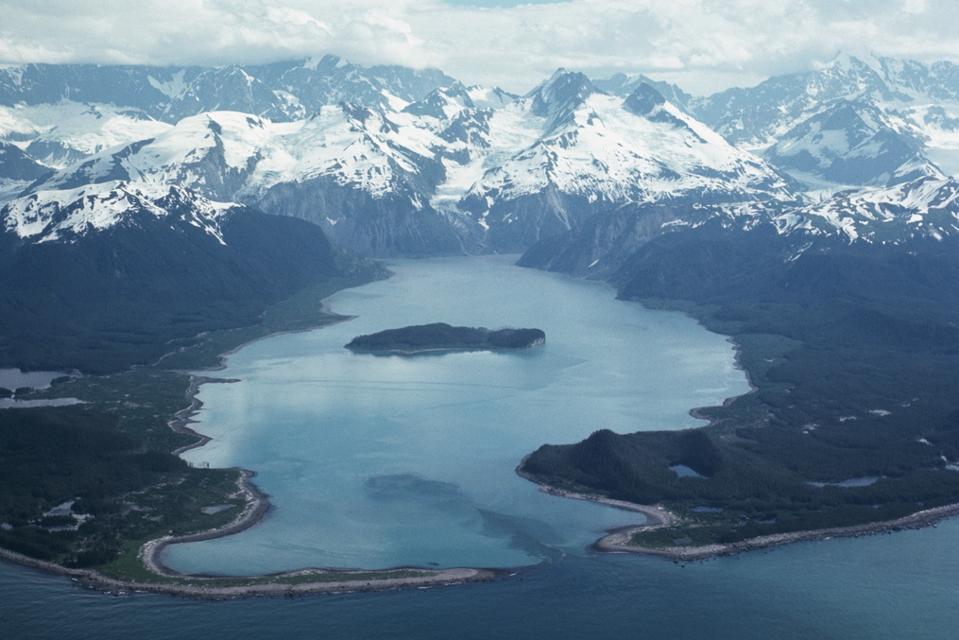 In 1958, a magnitude 7.8 earthquake triggered a debris avalanche into Southeast Alaska’s Lituya Bay. Displacing estimated 40 million cubic yards of water in an instant, the avalanche created a wave that ran 1,700 feet up a mountainside before racing out to sea. The largest known tsunami in history was taller than the Empire State Building in New York – 1,454 feet (or 443,2 meters) tall.

Geological evidence, historical testimonies, and even myths suggest that earthquakes followed by megatsunami are quite common here. Since 1853 at least four or five similar events are documented. French explorer Jean-François de La Pérouse, who explored Alaska in 1786, noted that the shores of Lituya Bay “had been cut cleanly like with a razor blade,” suggesting that a tsunami occurred shortly before his arrival. Local legends of seamonsters shaking the Earth record even earlier events, predating modern explorers and scientists by centuries.

Researchers now think the region’s widespread loss of glacier ice helped set the stage for the earthquakes and their increasing intensity.

In a recently published research article, scientists with the University of Alaska Fairbanks Geophysical Institute found that ice loss near Glacier Bay National Park has influenced the timing and location of earthquakes with a magnitude of 5 or greater in the area during the past century.

Scientists have known for decades that melting glaciers have caused earthquakes in otherwise tectonically stable regions, such as Canada’s interior and Scandinavia. In Alaska, this pattern has been harder to detect, as earthquakes are common in the southern part of the state.

Alaska has some of the world’s largest glaciers, which can be thousands of feet thick and cover hundreds of square miles. The ice’s weight causes the land beneath it to sink, and, when a glacier melts, the ground springs back like a sponge.

“There are two components to the uplift,” said Chris Rollins, the study’s lead author who conducted the research while at the Geophysical Institute. “There’s what’s called the ‘elastic effect,’ which is when the earth instantly springs back up after an ice mass is removed. Then there’s the prolonged effect from the mantle flowing back upwards under the vacated space.”

Rollins ran models of earth movement and ice loss since 1770, finding a subtle but unmistakable correlation between earthquakes and earth rebound. The disappearance of glaciers has caused Southeast Alaska’s land to rise at about 1.5 inches per year. Unexpectedly, the greatest amount of stress from ice loss occurred near the exact epicenter of the 1958 quake that caused the Lituya Bay tsunami.

Southern Alaska sits at the boundary between the continental North American plate and the Pacific Plate. They grind past each other at about two inches per year — roughly twice the rate of the San Andreas fault in California — resulting in frequent earthquakes. While the melting of glaciers is not the direct cause of earthquakes, it likely modulates both the timing and severity of seismic events.

The particular T-shape of Lituya Bay is caused by the Fairweather Fault, crossing the end of the bay from southeast to northwest. Four glaciers enter the bay from northeast. When the ground rebounds following a glacier’s retreat, tectonic stress is redistributed, effectively unclamping strike-slip faults, such as the Fairweather, making it easier for the two sides to slip past one another.

In the case of the most recent quake, the postglacial rebound torqued the crust around the fault in a way that increased stress near the epicenter as well. Both this and the unclamping effect brought the fault closer to failure until it snapped on July 9, 1958.

“The movement of plates is the main driver of seismicity, uplift and deformation in the area,” said Rollins. “But postglacial rebound adds to it, sort of like the de-icing on the cake. It makes it more likely for faults that are in the red zone to hit their stress limit and slip in an earthquake.”

Story Source: Materials provided by University of Alaska Fairbanks. Note: Content may be edited for style and length.