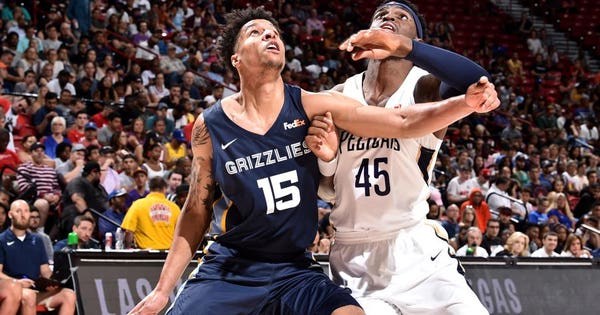 Brandon Clarke #15 of the Memphis Grizzlies and Zylan Cheatham #45 of the New Orleans Pelicans fight for position during the Semifinals of the Las Vegas Summer League on July 14, 2019 at the Thomas & Mack Center in Las Vegas, Nevada. (Photo by David Dow/NBAE via Getty Images)

Transitioning into the NBA can be very difficult. For most of us, the problem is lack of talent. Saying that you are “results-driven” on your resume alone ain’t going to get you onto the roster of an NBA team. But even for those with the rare gift of having enough basketball talent, moving from the collegiate or elite club level to the NBA has its challenges, many of which are not physical.

That’s why the NBA has established its rookie transition program, which focuses not on developing physical skills but instead on improving mental, emotional, and other life skills. And this year, mental health, meditation, and mindfulness are playing even larger roles in the transition program. After all, if an NBA team drafted you or allowed you participate in its camps, chances are that you already fall into the elite level in terms of physical talent. What then will determine whether you subsequently survive and thrive will be what’s between your ears, who helps you, and, of course, how much luck comes your way. This is actually the case with many career transitions that don’t happen to begin with N, end with an A, and have a B in the middle.

Brandon Clarke is one of the players who participated in the recent NBA Rookie Transition program. He played for San Jose State and then Gonzaga at the collegiate level before being drafted in the first round (21st overall) of the 2019 NBA Draft by the Oklahoma City Thunder and then immediately traded to the Memphis Grizzlies. Clarke has already impressed, earning the most valuable player (MVP) award in the 2019 NBA Summer League. So, it wouldn’t be completely surprising if Clarke thought that he could handle the transition without help.

Nevertheless, Clarke has seen the value of the Transition Program. As he explained, “entering a world of fame and fortune is very different from what things have been. There is a lot more money and people watching you.” At age 22, going on 23, Clarke is actually older than many of his fellow rookies. “A number of the other rookies are only 19 years old. When I was 19, I was really immature so I can’t imagine going through all this that young. Going to college really helped me get ready and more prepared.”

Cameron Reddish a rookie for the Atlanta Hawks participates in the NBA Rookie Transition Program at the Sheraton Hotel in Parsippany, NJ. (Photo: Courtesy of the NBA)

Courtesy of the NBA

Jamila Wideman, the Vice President of Player Development for the NBA, knows what it is like to go from college to a professional career, having starred as a point guard for Stanford before being drafted third overall in the 1997 WNBA draft by the Los Angeles Sparks. “For the first time, players are asked to manage a significant amount of money. They are now constantly in the public eye. They are becoming professionals in a game that has been previously a game for them.”

She added that there may be “the general sense that ‘I’ve made it,’ when in fact this is simply the beginning of the next journey. Although making the NBA is an incredible achievement, you have to do more than you’ve done before to stay here. The grind is about to begin.”

Speaking of grind, Clarke mentioned an important adjustment will be “getting used to the length of the season, which is now 80-plus games.” Of course, every rookie probably hopes for an even longer season, one that will include as many playoff games as possible, but such a lengthy season can have its physical as well as mental and emotional tolls. Wideman added that “a long season can be a challenge not just for the players and also their families, who are on this journey as well. With all the traveling, balancing family relationships can be quite stressful, and maintaining physical and mental health isn’t always easy.”

Just as it takes a team to be successful on the court, it often takes a team to get through emotional and mental health challenges. The NBA brought in a team of people to talk to the rookies. This included current and former NBA players to relay their experiences and experts in career and financial management.

The candidness of Kevin Love #0 of the Cleveland Cavaliers about his mental health struggles have helped open the door for more frank conversations about mental health. (Photo by Harry Aaron/Getty Images)

Wideman said that “players like Kevin Love and KeDemar DeRozen have helped expand conversations about mental health and helped them become more acceptable.” She emphasized that “mental health is not just the absence of illness. It is also the active engagement in their own wellness.” Even if you haven’t had mental health challenges in the past, many aspects of being an NBA player can change the game, so to speak. “You are uprooted from where you are to a community that you are not part of, from a college or overseas. Not only are you being asked to perform instantly at highest level, things like social media can amplify your mistakes. You can quickly become news, not just in the U.S. but globally.” Wideman said that you have to know, ”what it is like grow and continue to grow when your every move is watched.”

Dr. William Parham, Director of Mental Health and Wellness, for the National Basketball Players Association (NBPA) described the mental health and wellness program that has been up and running for a year and is going into its second year: “There are built in mental health services for all players in the league with a directory of mental health practitioners that have already been vetted. The services are confidential.”

Keyon Dooling, who had 13-year playing career in the NBA, helped put together the program. As Parham relayed, Dooling’s involvement “served as an important bridge for the players. Dooling could share his own experiences as an NBA player and know what the players would want.”

The Rookie Transition Program included guest speakers who relayed their stories and provided advice. (Photo: Courtesy of the NBA)

Courtesy of the NBA

Parham talked about the need to change the dialogue about mental health: “We have to promote the message that it is a sign of strength to take care of yourself. When dealing with mental health, you are not opening up a Pandora’s Box but instead of opening up treasure chest. The emphasis should be on the person before the performer.”

He said that “men, especially athletes, may be socialized to keep everything in.”

The Transition Program also provided the rookies with various mental health tools and resources. For example, Parham mentioned a “player access only website on mental health literacy and offering resources discussing mental health issues and other issues such as gambling and relationships.” As another example, Lindsay Shaffer, Head of Sports and Fitness at Headspace, described how the program introduced rookies to the Headspace app that offers them videos and interactive features to guide them through meditation.

Of course, not all rookies are the same. Each has his own background, experiences, and accompanying challenges, necessitating more tailored approaches to mental health. Parham talked about helping players across the continuum of mental health. “On one end of continuum, the players are managing their own mental and physical health, and their decision making is very good. Players in the middle of continuum are for the most part doing well but have some challenges popping up that require some attention. These may include suffering an injury, experiencing a relationship problem, or dealing with their career ending after average of just 4.7 years. At the other end of the continuum are those struggling with issues from past, the tattoos of trauma in the past.”