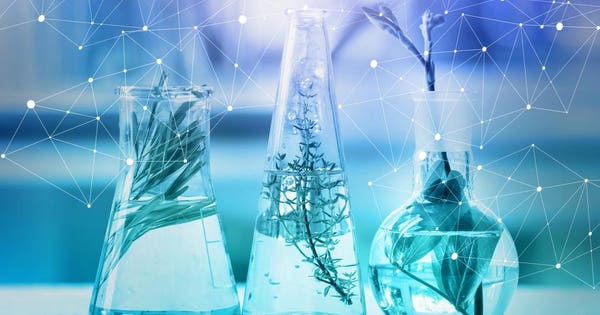 The blue biotechnology industry uses marine organisms to find compounds of interest for human use. Marine organisms produce countless lipids, proteins, and enzymes that help them thrive and survive in the ocean. These compounds can protect the organisms from disease or even allow them to parasitize or infect another species. The same bioactive compounds can be utilized to advance medicine for people. Other applications from bioactive compounds include developing resources used for food and feed stocks, cosmetics, healthcare, and diagnostic devices.

New cancer treatments, antibiotics and antifungals may lie in the genes of marine microorganisms in particular. In fact, bacteria comprise at least 90% of marine biomass. Microorganisms, including bacteria, fungi, and virus, are studied in microbiome research, which looks at the community of microorganisms as a whole.

Microbiome research will accelerate developments in the blue biotechnology industry. Only a tiny fraction of marine microorganisms can be cultured and tested for bioactive compounds in labs, but microbiome research uses next-generation sequencing to simply capture the genetic sequences of marine organisms. This is much easier than finding the exact conditions required to grow the microorganisms in the lab.

The genetic sequences can be analyzed for putative or known function of different genes. This process generates huge amounts of data that can be mined for genes that produce natural products of interest. In its infancy, the global blue biotechnology market could reach almost $5 billion by next year, with this projection excluding the potential discoveries from microbiome research.

PharmaMar, based in Madrid, discovered and produces Yondelis, a medicine to treat soft tissue sarcomas and ovarian cancer. PharmaMar focused their efforts on discovering anticancer compounds from the ocean and discovered the active ingredient of Yondelis in a sea squirt. PharmaMar netted $203 million in 2017.

Currently, microbiome research for blue biotechnology is driven by universities and research institutes. Dr. Alexander Chase, a postdoctoral researcher at the Center for Marine Biotechnology and Biomedicine in the Scripps Institute of Oceanography (SIO) , is investigating all the genetic information contained in marine sediments, which house diverse microorganisms.

According to Dr. Chase, “marine sediments are vastly understudied but provide a huge reservoir for biosynthesis potential”. He works in the lab that created NaPDos, which rapidly screens for genes of interest for natural product discovery. After screening, collaborating labs at SIO isolate the products and eventually use them in clinical trials for anticancer, antibiotic, or antifungal treatment.

Other labs at SIO had opened the door into research on bioactive compounds from marine microorganisms after they discovered an anticancer compound. The lab had begun to examine actinomycete bacteria. Actinomycete bacteria were known to be a source of bioactive molecules in the soil. It was unknown if the same type of bacteria could be easily cultured from marine samples and if so, how different the strains would be from their terrestrial counterparts. The venture paid off. Not only were the strains different from those in the soil, they were adapted to different ocean depths and produced salinosporamide A, an anticancer agent.

According to a paper released on the anticancer compound, the discovery occurred “only as a result of a collaboration between a highly specialized academic research institution and a committed, focused pharmaceutical company”.

New sources that can be mined for compounds of interest are arising constantly. Earlier this year, researchers found that jellyfish have species-specific microbiome that differ from the microbiomes of the water they live in. The jellyfish have a symbiosis with bacteria that are known to have biotechnological potential. Moreover, jellyfish are increasing in abundance under climate change and overfishing. This provides yet another untapped source of gene mining for blue biotechnology.