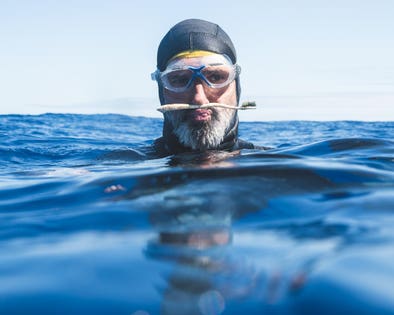 French long-distance swimmer Benoît Lecomte shows off a toothbrush that he found in the ocean. He did not use it to brush his teeth. (Photo: Courtesy of @thevortexswim)

There are two bits of microplastic news from this weekend. One of them is garbage, and the other is poop.

First the garbage. On Saturday, 52-year-old French long-distance swimmer Benoît Lecomte and his nine-person “Vortex” sailing crew reached San Francisco after spending 80 days at sea and Lecomte spending much of the time swimming through garbage, specifically the Great Pacific Garbage Patch. In 1998, Lecomte had become the first human to swim across the Atlantic Ocean without a kickboard, which puts to shame those of us who think navigating to the other end of a jacuzzi without spilling a drink is an accomplishment. On his subsequent ocean swims, Lecomte encountered more and more plastic waste, raising concerns about what was happening to the oceans.

All of this motivated him to embark on the Vortex Swim project to go where the concentration of plastic in the ocean is supposedly the highest: the Great Pacific Garbage Patch. The Patch is otherwise known as the Pacific Trash Vortex, hence the name of the project. It’s called the vortex because the currents of the North Pacific Gyre run in a clockwise direction forming a vortex that sweeps garbage from around the Pacific Rim including countries in Asia, North America, and South America into a central area in the North Central Pacific. Think of it like a giant toilet bowl being flushed, except this toilet is a bit larger than yours, keeps running, and has no real exit pipe for the trash. The size of the resulting garbage collection is somewhere between that of Texas and Russia, which would be large enough for you to fall into, regardless of whether the seat is up or not.

In early June of this year, Lecomte and nine others set sail from Hawaii in a path that would take them through the Patch. The crew included Tyral Dalitz as the First Mate and Expedition Manager, Yoav Nevo as the Skipper, Joshua Muñoz and Corbin Marshall as the Photographers, Hannah Altschwager as the Operations and Communications Manager, Adam Hill as the Medic, David Langdon as the Social and Digital Strategist, Heather Lynn Hatcher as the Assistant Medic, and Drew McWhirter as deckhand Scientist. There was no Professor or Mary Ann. Lecomte traveled in the boat until they would spot areas for him to swim, especially locations that seemed to have plastic. All in all, Lecomte swam over 330 nautical miles and over 230 hours with the boat traveling over 5300 nautical miles.

Now, here’s the bad news that may initially sound like good news. When they got to the Garbage Patch, it looked like “beautiful and clear waters,” according to Altschwager. “It did not look like a garbage patch at all, despite the name.” McWhirter explained that, “when the winds were in the 10 to 15 knots range, creating enough surface waves, the ocean looked pretty clear. Only when the winds were less than five knots on the calmest day did you begin to see anything near the surface that resembled plastic.” Even then, the garbage wasn’t as obvious as you would expect.

Lecomte described how when he first descended into the patch he saw “what looked like plankton, many small spots of reflective light. On closer look, it wasn’t plankton, but instead small pieces of plastic or microplastic.” The National Ocean Service classifies microplastics as plastic pieces that are less than 5 millimeters in length. Lecomte and his mates did encounter some larger objects such as “ghost nets,” which are abandoned fishing nets, and a variety of macroplastics such as toothbrushes, plastic bottles. and the bottle caps, the most common larger plastic objects found. But by far, the most common plastic was microplastic.

This is all bad news because it’s surreptitious, hidden plastic pollution, rather than obvious pollution. Things could look clear and fine at first glance, but only a closer and deeper look, like 10 meters deep, may reveal the true extent of the pollution. Lecomte explained that “this was plastic pollution that looked very difficult to clean and clear. If it were just larger plastic objects then maybe you could more easily sweep everything out of the ocean.” Smaller plastic pollution is not only tougher to detect and clear, it could more quietly make its way through the food chain up to you.

This brings us to the second microplastic news from the Labor Day weekend: a piece of poop study published in the Annals of Internal Medicine. For the study, a team from the Medical University of Vienna in Austria (Philipp Schwabl, MD, Philipp Königshofer, DVM, Theresa Bucsics, MD, Michael Trauner, MD, and Thomas Reiberger, MD) and the Environment Agency Austria (Sebastian Köppel, Dipl-Ing, and Bettina Liebmann, PhD) asked eight healthy volunteers who were from 33 to 65 years old to give them poop. Each volunteer provided a single stool sample, in this case stool meaning feces rather than something that you usually may sit on (unless, of course, you typically sit on feces). The researchers then searched the stool samples for microplastics. Isn’t science fun?

Every stool sample ended up having microplastics with a median of 20 microplastic pieces per 10 grams of stool. The microplastic pieces ranged from 50 to 500 micrometers in size. The researchers also found nine different types of plastics with polypropylene and polyethylene terephthalate being most common. Yes, plastics aren’t just present in North Shore High School, the setting for the movie Mean Girls. They were present in the intestines of all eight volunteers.

Now this was a very small study with very few samples. But the fact that the research team found microplastics in all volunteers makes it likely that microplastics aren’t just permeating marine life but are making their way into many humans as well.

It isn’t completely clear yet what microplastics may do to humans. A study published in the Proceedings of the National Academy of Science did find that microplastics can disrupt oyster reproduction. Even if you are not an oyster who wants to have sex, this raises concerns that microplastics can affect your bodily functions as well. After all, your intestines contain cities of bacteria called the microbiome that regulate many body functions. Who knows what plastic may do to this bacteria? More research is needed to determine how microplastics may affect your microbiome and whether such plastic pieces have cancer and other disease causing properties.

The Vortex Swim crew did find evidence that the plastic pollution is changing marine life. They showed me pictures of fish eggs growing on bottlecaps and other objects and mentioned that the pollution was creating new ecosystems that was supporting life not normally found in the middle of the ocean. A particularly dramatic finding of their was cracking open a plastic bottle only to release a frogfish that apparently had been growing in the bottle.

This bottle found the ocean had a frogfish living inside of it. (Photo Courtesy of @thevortexswim)

Lecomte hopes that the Vortex Swim will bring more attention to the continuing and growing problem of plastic pollution. During the voyage, the crew conducted tests for a network of scientists such as Sarah-Jeanne Royer, PhD, an oceanographer at the Scripps Institute of Oceanography, and collected samples for the different scientists to eventually run more experiments. Royer indicated that the coming months may result in more revelations about this pollution.

What is the source of these microplastics? Well, as a Woods Hole Oceanographic Institution video explains, some of the microplastics come from larger plastic objects such as bottles and other households goods being ground up by the elements. However, studies like one presented at the Geological Society of American 2018 meeting and one published in the International Journal of Environmental Research in Public Health have found that car tires, brake pads, and road surfaces produce a substantial percentage of microplastic pollution in the environment.

Synthetic clothing is another significant source of microplastics. A study published in the Marine Pollution Bulletin revealed that washing a single load of clothing can release up to 700,000 synthetic microfibers into the water. A report from the International Union for Conservation of Nature indicated that synthetic textiles lead to over 35% of the estimated 1.5 million metric tons of microplastics in the ocean. Yes, even though your clothing may not look like a water bottle, if they are not from purely natural fibers, they could be made of and shedding plastic.

The crew found plastic in the guts of this mahi-mahi fish. (Photo: Courtesy of @thevortexswim)

Lecomte hopes that the Vortex Swim findings will be a “wake-up call for our world to do more about reducing plastic pollution.” Possibilities include moving away from clothing and other objects that can create plastic pollution and finding better ways to dispose of plastic objects. The wake up call may come from the combination of finding so much plastic in ocean, realizing that such pollution may exist even when things appear clear, and recognizing that this pollution is likley making its way into our stomachs and intestines. Altschwager relayed how she saw animals such as albatrosses trying to eat larger plastic objects. This observation, the crew finding plastic in the stomach of marine life, the ubiquity of microplastics in the ocean garbage patch, and the recently published human poop study all suggest that microplastics are becoming firmly entrenched in our and other animals’ food systems. If we don’t do more urgently to reduce plastic pollution, who knows what damage this will do to our bodies and health?