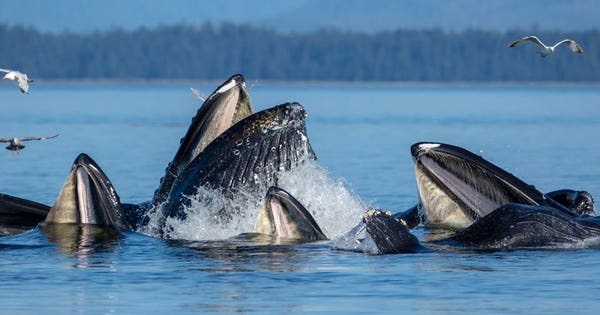 Microplastics are found everywhere, from remote wilderness to the depths of the sea. They can alter growth of our agricultural crops. Recently, researchers Gloria Fackelmann and Dr. Simone Sommer of Ulm University conducted an extensive review covering how ingested microplastic causes an imbalance in the gut microbiomes of animals as tiny as zooplankton to as large as humpback whales.

As plastic breaks down, it forms microplastics, which are pieces less than 5 mm in length. Most microplastics are generated on land before being washed out to the ocean. The plastic packaging and clothing with synthetic materials corporations produce (and that we discard) is likely to find its way into the ocean and into the stomachs of marine life.

Which animals have consumed microplastics?

Loggerhead sea turtles are one of many animals impacted by microplastics.

Zooplankton often mistake microplastics for food. Since zooplankton are near the bottom of the food web, microplastics can be concentrated as animals consume other animals, much like the bioaccumulation of DDT in bald eagles in the 20th century. Filter-feeding gooseneck barnacles also accumulate microplastics.

How do microplastics hurt their gut and gut microbiomes?

The gut microbiome is a community of bacteria and other microbes located inside of digestive systems of humans and other organisms.

Microplastics can damage guts and gut microbiomes in two ways: mechanical and chemical. Exposure to microplastics can cause animals to feel full, even though they haven’t consumed enough food. This causes them to starve to death. The size and shape of some microplastics can cause them to puncture the lining of the gut, an important barrier that prevents disease and gut bacteria from entering the rest of the body.

Chemically, microplastics carry endocrine (hormone) disrupters and also cause immune and liver toxicity. The material of microplastics are damaging in themselves. Microplastics, because they are hydrophobic, attract other compounds that are absorbed into the particles. These compounds are particularly damaging to the gut microbiome, as well as the animal itself.

What do pathogens and disease have to do with microplastics?

Pathogenic bacteria can hitchhike on microplastic particles. Since many animals’ bodies are already stressed from microplastics, it may be even easier for the animals to get sick from diseases. Even if the hitchhiking bacteria don’t cause disease, they can colonize the gut and out-compete other, more helpful bacterial species the animal relies on to digest its food.

Microplastics are pervasive and ubiquitous. These microplastic grains are about 0.2 mm in diameter.

Microplastics also impact humans. Microplastics are already found in our tap and bottled water, as well in our lungs and feces. We are chronically exposed to microplastics like our animal counterparts. Prioritizing and funding research on microplastic impacts on ourselves and the world we live in is critical.