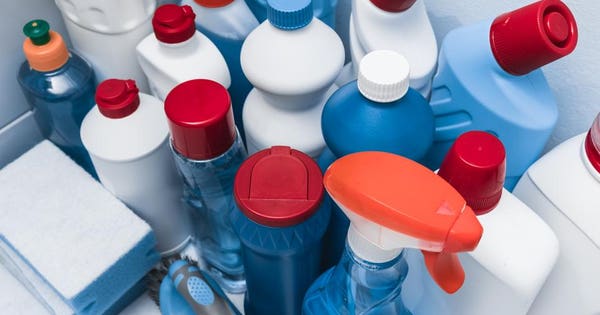 Bleach may be great for cleaning floors but not the inside of your body. (Photo: Getty Images)

Now means now.  Not after you have finished the bottle. Not tomorrow. Not after the end of Avengers: End Game. Not after you have finished texting while on the toilet. Now. Because guess what you are drinking if you follow the included instructions for products such as the Miracle or Master Mineral Solution, the Miracle Mineral Supplement, the MMS, the Chlorine Dioxide (CD) Protocol, or the Water Purification Solution (WPS)? The answer begins with “bl” and rhymes with Screech. As the FDA warning says, “When mixed according to package directions, they become a strong chemical that is used as bleach.”

Here’s the warning tweeted by the FDA:

After receiving numerous reports of consumers getting sick, the FDA warns you not to drink sodium chlorite products such as Miracle Mineral Solution. These products turn into bleach and can make you sick. https://t.co/SOMBKab4Vp

That’s the “miracle”? Drinking bleach? Apparently, Miracle Mineral Solution consists of 28 percent sodium chlorite mixed in distilled water. Instructions tell you to mix this solution with a citric acid such lemon or lime juice. This is a way of turning lemons into, well, far worse. Doing so turns this mixture into chlorine dioxide, which is “a powerful bleaching agent.”

The FDA announcement continues, “Both sodium chlorite and chlorine dioxide are the active ingredients in disinfectants and have additional industrial uses. They are not meant to be swallowed by people.”

That means unless you are a piece of tile on a kitchen or factory floor, you should not drink this stuff. You may like industrial music but industrial chemicals do not belong in your gastrointestinal tract.

Why? Do I have to explain why drinking bleach is not a good thing to do? According to the announcement, “the FDA has received reports of consumers who have suffered from severe vomiting, severe diarrhea, life-threatening low blood pressure caused by dehydration, and acute liver failure after drinking these products.” This is why bottles of bleach have the words, “do not drink,” on them.

Yet, take a gander at this paragraph in the FDA announcement:

Some distributors are making false—and dangerous—claims that Miracle Mineral Supplement mixed with citric acid is an antimicrobial, antiviral, and antibacterial liquid that is a remedy for autism, cancer, HIV/AIDS, hepatitis, flu, and other conditions. But the FDA is not aware of any research showing that these products are safe or effective for treating any illness. Using these products may cause you to delay other treatments that have been shown to be safe and effective.

Sure, putting bleach in your intestines may destroy some bacteria and viruses there. But that’s like saying that using a Brillo pad on your face is going to remove some pimples. Ultimately, getting killed by drinking too much bleach will solve a lot of medical problems but has its unfortunate side effects, such as not being able to re-watch Avengers: End Game and text on the toilet in a movie theater.

Here is a CBC News segment from 2016 on some of the Miracle Mineral Solution health claims:

This is not the first time that the FDA has warned about products like the Miracle Mineral Solution as I have written previously for Forbes. The miracle then might be that people continue to pay money to consume these products.

Our Next Mars Rover is Headed to The Red Planet on This Week @NASA – July 31, 2020
Planting tiny urban forests can boost biodiversity and fight climate change
As Trump bans WeChat, some in China turn to encrypted messaging app Signal
Cuomo Says All New York Schools Can Reopen Because Of State’s Success In Coronavirus Fight
Here’s how exploding stars forged the calcium in your teeth and bones