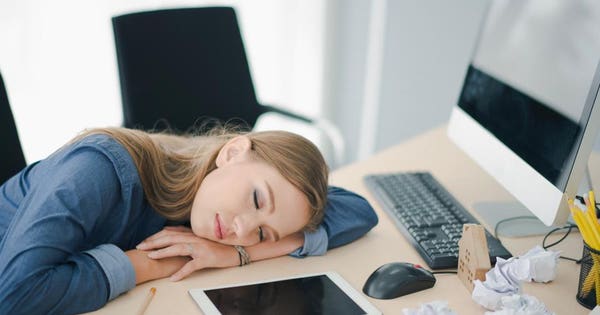 When your boss catches you napping on the job, should you just tell him or her that you are trying to prevent heart disease? (Photo: Getty Images)

Why run on a treadmill, when you can sleep on it? Why eat kale, when you can face-plant in a bowl of it? After all, didn’t a study just published in the journal Heart say that napping can prevent cardiovascular disease?

Population cohort studies like this one conducted by Nadine Häusler, Jose Haba-Rubio, Raphael Heinzer, and Pedro Marques-Vidal from the University Hospital of Lausanne can only show associations and not prove cause-and-effect. Such studies involve following what happens to a group of people and then trying to determine if there is a statistical correlation between particular factors or behaviors and health outcomes over time.

In this study, the group of people followed (for up to 7.8 years and for a median of 5.3 years) was 3462 people from Switzerland who didn’t have any previous history of cardiovascular disease. The researchers then tried to determine whether the participants’ napping habits were associated in any way with their likelihood of developing cardiovascular problems (e.g., heart attack or death from heart disease) during the follow-up period.

The ways the researchers assessed the participants’ napping habits were, as the Pink song goes, less than perfect. Participants completed questionnaires that asked them how often they had napped over the previous week and how long they had been asleep during the naps. People aren’t always great at remembering how often they napped over the past week. Heck sometimes I can’t even tell or remember if I just napped. Nevertheless, based on their answers, participants fell into one of four categories: non-nappers (otherwise known as robots), taking one to two naps a week, taking three to five naps a week, and taking six to seven naps a week.

People aren’t so great at remembering how long they napped either, unless they face planted on their smartphone timer. The researchers divided participants into those whose naps were less than an hour each and those who had naps lasting one hour or more. The hour mark is a bit arbitrary and raises another question: how did study participants define naps? While most may agree that a 10-hour nap is not really a nap, people may differ in how they classify a three-hour snooze. On the opposite end of the spectrum, how long do you have to close your eyes before it becomes a nap. Is a two-minute drift away a nap? Does drool need to be involved?

With all these limitations, take the study’s results with not just a grain but a pillow full of salt. The main finding was that compared to non-nappers, those napping one to two times a week were 48% less likely to have had a cardiovascular problem during the follow-up period. However, more was not better. Those who napped six to seven times a week were not significantly more or less likely to have developed cardiovascular problems than non-nappers.

What can explain these findings? Is napping like bedazzling? Can a little be helpful in some situations but more be too much or symbolize a larger problem? Untangling these associations can be like trying to untangle your earphone cord: complicated. An occasional nap here and there can help relieve stress and catch up on sleep, which could help reduce cardiovascular risk. However, at the same time, those who can afford to nap a few times a week may have more flexible, organized, or secure life situations, which in turn may help prevent cardiovascular disease. Plus, napping may be associated with other healthy behaviors such as napping after a twice-a-week intense workout, yoga class, or kale salad.

By contrast, if you nap nearly every day, that may be a sign that you are having an ongoing problem. Maybe you are unemployed, are lonely, are depressed, or have a chronic condition that’s making you particularly tired like sleep apnea. Maybe your job is too exhausting or mind-numbingly dull. All of these can be unhealthy situations that can then lead to cardiovascular problems.

So should you sleep on these study results? And if so, how often and how long? Well, this is not the first study to suggest that napping in moderation can be associated with better health outcomes. Napping can be helpful in our chronically sleep-deprived society. After all, in some cultures and countries, a mid-day nap such as a siesta, is more the norm. You’ve probably at some point experienced the post-lunchtime stupor that makes you wonder how productive you really are during that time. Therefore, if you have the opportunity to nap, giving in to the temptation to snooze may not be such as bad idea, assuming that it doesn’t disrupt your normal sleep.

This brings up another key point: napping like everything in life that is not sushi has its pros and cons. This video from Mayo Clinic covers some of these:

Your napping habits should depend on how you feel and you life situation. This may also vary from year to year, month to month, or even day to day.

Therefore, don’t expect doctors anytime soon to be writing instructions that say, “nap regularly, not to exceed two times a week.” If you do nap one to two times a week, don’t think that this alone will help prevent heart disease. If you nap six t0 seven times a week, you may want to check in with your doctor to make sure that you don’t have another issue that is leading to your very frequent napping. If you are a non-napper and can stay awake at all hours every day, don’t panic and force yourself to nap if you don’t feel the urge. Just accept the fact that you are weird and probably a robot.