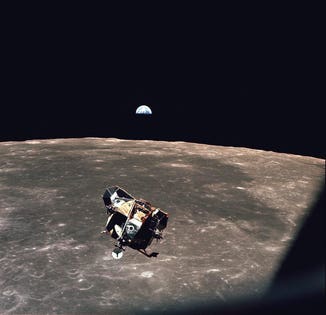 A view of the Apollo 11 lunar module “Eagle” as it returned from the surface of the moon to dock with the command module “Columbia”. A smooth mare area is visible on the Moon below and a half-illuminated Earth hangs over the horizon. Command module pilot Michael Collins took this picture.

Both NASA and the European Space Agency (ESA) have separately announced initiatives to explore the Moon’s subsurface caves and lava tubes. ESA has just called for innovative new exploration technology proposals that could be used to potentially probe miles of lunar caves and lava tubes. And NASA has recently put forth its Moon Diver proposal — an innovative rover that would descend into a pit on our Moon’s near side.

The hope among planetary scientists is that such subsurface structures are only the tip of the subterranean lunar iceberg . Such refuges will arguably be crucial if we are to permanently settle the Moon. That’s because the list of lunar surface hazards includes micrometeorites, extreme temperature cycling, high-energy protons from the solar wind, radiation from solar flares and the sun’s coronal mass ejections (CMEs), galactic cosmic rays, dust and the vacuum of space itself.

“You can escape all of that if you get below a couple of meters of rock,” James Ashley, a planetary scientist and systems engineer at NASA’s Jet Propulsion Laboratory (JPL), told me.

Where are such subsurface caves most likely to be located?

In volcanic areas of the lunar maria, planetary geologists have identified pits that could be related to the collapse of cavities such as lava tubes — where lava once flowed under the lunar surface, says ESA.

Japan’s Kaguya lunar orbiter spacecraft spotted three holes or pits that could act as windows into near side tubes, as I noted here previously. One found in Mare Tranquillitatis is only 350 km from the Apollo 11 landing site.

The Tranquillitatis pit is the size of an American football field and has a depth of a hundred meters, says Ashley. We can see into its subsurface real estate for 20 meters, but we don’t know if it continues, he says.

That’s where Moon Diver would help.

Moon Diver would be a 14-day lunar rover mission that would rappel down the cliff wall of the Tranquillitatis pit.

“It will go all the way down to the bottom and shine a flashlight to see if there is a cave down there and see how far back it goes,” said Ashley.

Such underground chambers have been the stuff of science fiction for a half-century or more. But what else might these freaks of geology provide? Here are a few ideas of how to best use these magmatic chambers.

Use existing lunar regolith (the Moon’s fine-grained surface layer) as a soil medium in which as wide a variety of plants and vegetables could be coaxed to grow. A greenhouse equipped with LEDs could, in theory, provide lunar residents and visitors with a plethora of fresh fruit and vegetables on which to keep them healthy in gravity that’s only a sixth that of Earth. Of course, how plants respond to this lack of gravity, different soil and led light is still being researched.

This idea may be further down the road. But once explorers harness the Moon’s much talked about subsurface water, whether in the form of water ice from permanently shaded craters at the lunar poles; extracted from the subsurface; or even created artificially, then there’s no reason that lava caves couldn’t be used to farm tilapia, seaweed, kelp, krill, as well as other species of crustaceans.

This would cater to space tourists looking to get a sense of the ancient morphology of the lunar subsurface, in a manner not unlike Earth-bound visitors to an Arctic ice hotel. The hotel’s rooms and suites would be safely protected in areas of the cave that would offer the most shelter from potential incoming radiation. However, the idea would be to use a lunar cave’s artificially-enclosed, natural openings as magnificent skylights under which guests could relax and dine. And during optimal times of the lunar cycle, the guests could even do some amateur stargazing.

These caves could be used as science labs to learn more about the geology and potential subsurface astrobiology of the moon itself. But they could also be used to conduct neutrino experiments and perhaps even as future sites of particle physics research.

These tubes and caves would also make natural centers for lunar manufacturing both to sustain development on the Moon itself and for products that might have intrinsic value for future Mars exploration, or possibly even for shipment back to Earth. Whether manufacturing inside lunar caves is ultimately cost-effective might arguably depend on whether Earth to Moon transport costs will scale down as lunar scientific and commercial development ramp up.

How extensive are these underground chambers?

“It wouldn’t surprise me if we had km of multiple connected tunnels,” said Ashley. “The long term future of lunar exploration and space tourism is going to have to exploit these caves.”

Why environmental justice research needs to include disability
There’s A ‘Harvest Moon’ Coming. Here’s How, When And Where You Can Get The Best View
Apple Card owners are having problems ordering their iPhone 13
In 1181 a rare explosion lit up the sky, and we may have finally found what it left behind
Elon Musk praises Chinese automakers as Tesla works to improve company’s reputation