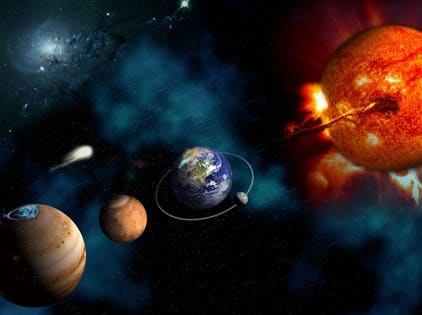 Heliophysics is the study of how the Sun affects space and the space environment of planets.

NASA may soon use a constellation of free-flying CubeSats to track and image charged particles from the Sun as a means of better understanding our solar system’s space weather.

The SunRISE (Sun Radio Interferometer Space Experiment) project is finishing up a $1.25 million Phase A concept study this September. If chosen by NASA for a full Explorer-class mission, it could be ready for a 2023 launch as part of a commercial satellite payload to Earth geosynchronous orbit.

The Sun can produce immense explosions throwing as much mass as all of Lake Michigan, into the solar system, SunRISE team member Joseph Lazio, a radio astronomer at NASA’s Jet Propulsion Laboratory, told me. Solar flares near the Sun’s surface produce “jets” of accelerated particles that are thought to be guided into the solar system by the Sun’s magnetic field, he says.

SunRISE will consist of a constellation of six CubeSats which would fly within about 10 km of each other and image the Sun in a portion of the spectrum blocked by Earth’s ionosphere, the authors of a 2019 IEEE paper describing the project write.

The CubeSats would be carried to their target orbit as a secondary payload in conjunction with a larger host spacecraft, says NASA. And although the solar-powered CubeSats — about the size of a 20-pound toaster oven — would be free-flying, they would not be actively controlled. However, their positions in orbital space and time would have to be continually measured to high accuracy. This would enable data from the CubeSats to be combined to form radio images of the solar emission they were tracking.

As for the prime science drivers behind this proposal?

Every time there is a major solar energetic particle radiation event at Earth, the Sun first emits a super-intense, low-frequency radio burst tens of minutes before the particle radiation floods space, Justin Kasper, SunRISE’s principal investigator, and a space scientist at the University of Michigan in Ann Arbor, told me. We have never been able to image this emission, he says.

If we could image these bursts, says Kasper, it would be invaluable for understanding the magnetic connection between the Sun and space. That includes how the Sun’s magnetic field changes over the solar cycle and whether in the event of a solar flare, an active region poses an elevated threat to Earth.

How these energetic solar particles are accelerated also remains poorly understood, says Lazio. But if selected, SunRISE will help us learn whether these particles’ trajectories are more complicated than we thought, he says.

“Sometimes these particles can damage spacecraft when they hit, thus, understanding how they are accelerated and travel may help us understand how to protect spacecraft from space weather,” said Lazio.

Could such low-frequency arrays be used to make observations of other objects in our solar system?

Students at the University of Michigan would plan on taking data collected by SunRISE and digitally repointing it at the outer planets, says Kasper. This would allow us to monitor Jupiter, Saturn and Neptune for auroral emission that might be triggered when particles from a large solar ejection hits an outer planet, he says.

Can this SunRISE tech be expanded?

We need to show it is cost feasible to build and launch 30 to 60 small spacecraft, says Kasper. But, he says, in scaling up such an array’s architecture, eventually, it will be necessary to exchange data between spacecraft at high bandwidths. Kasper says achieving that will require either a really good WiFi network operating over the whole of the array, or perhaps even communication via laser optics.

As for the potential for future low-frequency radio observations of extrasolar planets?

Down the road larger versions of this array could be used to hunt for radio emission from exoplanets, which would tell us if they have internal dynamos and magnetic fields, says Kasper.