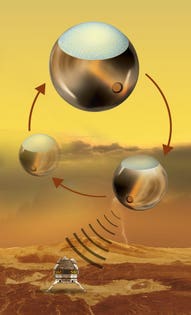 NASA is funding a study that may pave the way for a rechargeable lander on Venus; one that would be wirelessly charged by a floating, balloon-like companion that would collect solar power in our neighboring planet’s upper atmosphere.

Venus’ extraordinarily inhospitable atmosphere and surface have long hampered attempts to explore the planet. With surface temperatures of 450 Celsius; surface pressures 92 times that of Earth and a thick carbon dioxide-dominated atmosphere, Venus has long guarded its secrets.

But this nine-month, phase one initiative funded by NASA’s Innovative Advanced Concepts (NIAC) program, may finally help a lander get a handle on Venus’ surface chemistry, geology, and history .

The idea is to use an autonomous, floating power generator to collect solar energy near the top of Venus’ thick atmosphere .

The top of the Venus atmosphere incoming solar radiation averages about 2636 watts per square meter, whereas at the top of Earth’s atmosphere, the solar constant is about 1367 watts per square-meter, Erik Brandon, a NASA Jet Propulsion Laboratory (JPL) power technologist who’s leading the study, told me.

The transmitted energy, says Brandon, would be converted to direct current electrical power on the lander via a rectifying antenna or “rectenna” constructed from suitable high-temperature materials and using high-temperature silicon carbide diodes. Thus, the lander should be able to continually extend its operating life. Or at least for longer than the former Soviet Union’s 1970s’-era Venera landers, which never even lasted two hours on the Venusian surface.

Once the lander’s batteries were recharged, the solar power collecting spacecraft would re-ascend back up to the upper reaches of Venus’ atmosphere to recharge its own batteries once again.

Brandon says the biggest challenge is likely to be achieving sufficient control with the collecting vehicle to adequately maneuver the Venus atmosphere between charging at higher altitudes and then getting back to the lander site. The collecting balloon vehicle will then have to maintain control while beaming its power to the lander.

But this continual process of collecting and recharging solar energy for the lander would continue as long as the lander’s components and electronics survived Venus’ harsh environment.

Brandon says in principle this lander/floating-charger combination could also work to keep a Venusian rover powered up. The floating balloon platform could also serve as a communications relay between Earth and the lander. And, in theory, it could continue to function as a secondary science mission even after the lander had ceased to function.

But can the lander’s electronics survive the surface heat and pressures?

We intend to leverage advances in high-temperature electronics (such as silicon carbide devices) and packaging to determine if we can design an end-to-end power system, says Brandon.

This phase one study will answer questions such as what altitudes would the collecting spacecraft have to be? How long would the lander be able to run off a single upload of new power? And what would the lander’s surface life be upon first landing, without being recharged?

The initial goal is to ensure it can run with fully-charged batteries until the first recharge event, says Brandon.

Map of Soviet-era landers on Venus.

Why not simply use a radioisotope thermoelectric generator (RTG). That is, an electrical power unit that generates energy from the natural decay of radioactive material?

“There are no RTGs that can survive at Venus temperatures and conditions,” said Brandon. “Right now, the focus at NASA is on developing improved RTGs for low-temperature, vacuum environments in deep space.”

Where else might this tech be used in planetary exploration?

Brandon says the principle of such a power beamer might work on low-temperature ocean worlds in the outer solar system. That’s where a fixed lander with sufficient power would turn the technology on its head and beam power to a smaller probe. “The idea is that it allows you to extend your fixed power source beyond the boundaries of the lander,” said Brandon.

But Venus would hopefully see some variation of this balloon-collecting and power-beaming technology first. And if Brandon’s current study is successful, a potential second round of funding offers an additional two years of study.

The planetary science community is eager to get on with Venus surface exploration. The Venus exploration community would like to see a working lander that would last for days at least, says Brandon. Or at least long enough to collect data and perhaps perform some simple sampling.

“[But] it is difficult to predict the lifetime of a mission in such a harsh environment,” said Brandon.