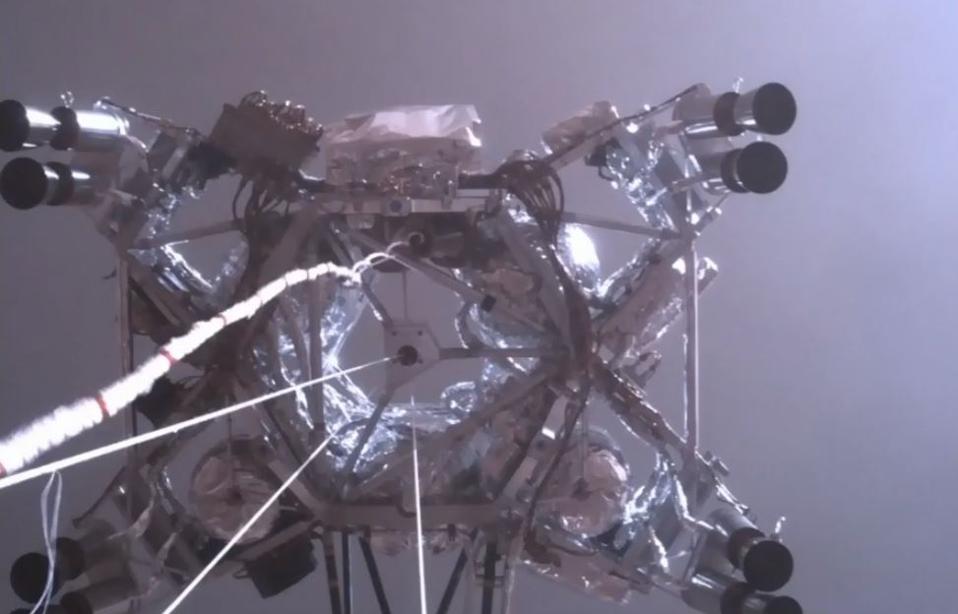 NASA has revealed the moment its latest rover touched down on Mars like never before – with stunning footage capturing the thrilling descent to the surface.

On Thursday, February 18, the U.S. space agency’s Perseverance rover landed on Mars in Jezero Crater, beginning a multi-year search for life on the Red Planet.

The mission, a decade in the making, is the fifth rover NASA has sent to Mars.

To make it down to the surface, the rover using a complicated process widely referred to as the “seven minutes of terror”.

After passing through the atmosphere at thousands of miles per hour it descended via parachute, before a rocket-propelled “sky crane” platform lowered it to the surface.

This was the same landing employed by its predecessor, Curiosity. And while footage of that descent was taken in 2012, we’ve never seen footage directly from the sky crane itself before.

Today, Monday, February 22, NASA unveiled the incredible footage (above) taken by cameras on board the descent stage, the rover, and its sky crane system.

While we’ve seen footage of Mars landings before, we’ve never seen a perspective taken from above the rover itself, appearing truly out of this world.

Audio from the surface of Mars, taken by a microphone on Perseverance, was also released.

“This is the first time we’ve been able to actually capture an event like the landing of a spacecraft on Mars,” said Mike Watkins, the director of NASA’s Jet Propulsion Laboratory (JPL) in California in a press conference.

The footage begins with the parachute deploying from the rover, decelerating in the skies of Mars at an altitude of about 12 kilometers.

Once the vehicle had slowed to subsonic speeds, the heat shield was separated that had brought the rover safely through the atmosphere, and dropped to the ground.

At 7.4 kilometers, the rover gets a radar lock on the ground as it continued descending under parachute, moving at 90 meters per second.

Then the parachute separated and the sky crane system activated, beginning a controlled descent to the surface.

Sky crane then lowed the rover by cables known as bridles, with an “umbilical” running to the rover – sending the sky crane’s last images to the rover, including this footage.

As dust is pushed away from the landing site, the camera switches to on board the rover – showing the sky crane fly into the distance.

It then crashed a safe distance away from the rover to the northwest, with the rover facing southeast.

And that was it. Touch down confirmed, and Perseverance was on Mars.

“You are getting a glimpse of what it’s like to land successfully in Jezero Crater,” Matt Wallace, the Deputy Project Manager on Perseverance, said in the press conference.

Now that Perseverance is safely on Mars, its exciting mission on the Red Planet can begin.

Over the next few days, the rover will be testing out its various systems, including taking a small drive for the first time.

Then in the coming weeks, it will deploy a small helicopter-like drone on Mars – called Ingenuity – that will perform the first attempts at flight on another planet.

Once that is done, the rover will head for its first science site, where it will begin its mission of studying the Jezero Crater.

The crater contains the remains of an ancient river that flowed on Mars billions of years ago, which may have been a prime habitat for life.

By studying the surface Perseverance will look for evidence of this life, in the form of fossilized microbes on the surface.

It will also collect samples and store them in cigar-sized caches on the surface, which a future mission later this decade will pick up and bring back to Earth for further study.

With a plethora of other instruments on board, it’s a mission like no other.

And it was all made possible by that amazingly dramatic seven minutes, captured like never before – a video that will likely be watched again and again for generations.

Jaguar Land Rover is developing a hydrogen-powered vehicle and plans to test it out this year
China is kicking out more than half the world’s bitcoin miners – and a whole lot of them could be headed to Texas
Cornwall, home of the climate-themed G-7 summit, is embracing a push toward renewable energy
Governments ally for federated quantum encryption satellite network
Biden-Harris Administration Proposes Competitive Lease Sale for Offshore Wind Development for New York & New Jersey