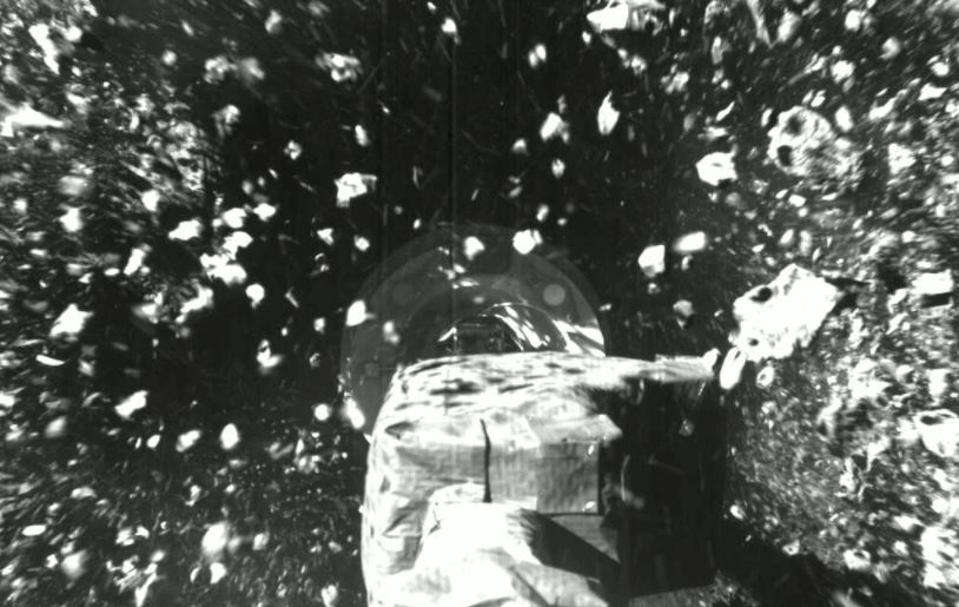 NASA made history earlier this week with its first-ever successful landing on an asteroid, and now images returned by the spacecraft have revealed what happened in the dramatic touchdown.

On Tuesday, October 20, NASA’s OSIRIS-REx spacecraft successfully “touched” the surface of asteroid Bennu, more than 300 million kilometers from Earth, for a brief six seconds with an extended arm.

While short, this event was enough time for the arm to fire a puff of nitrogen gas into the surface, kicking up rocks from the surface hopefully into the collector head of the arm.

In the coming days, mission scientists will measure how much material the spacecraft collected at the landing site, called Nightingale, by spinning the spacecraft with its arm extended to measure its intertia.

If its enough, they will prepare for the journey back to Earth with the sample in tow in March 2021, returning home in September 2023. If not, the team will attempt a second landing later this year.

Based on images released by NASA yesterday, however, the signs look promising. A sequence of images taken by the spacecraft show the sampling head touching the surface, and then causing a spray of debris as it fired a puff of gas.

According to NASA, the images show that the sampling hit the surface head-on. It then manages to bury under the “regolith” – or surface rocks – on the asteroid, going so far as to crush some of the rocks.

“One second later, the spacecraft fires a nitrogen gas bottle, which mobilizes a substantial amount of the sample site’s material,” said NASA.

“Preliminary data show the spacecraft spent approximately 5 of the 6 seconds of contact collecting surface material, and the majority of sample collection occurred within the first 3 seconds.”

In total the clip above corresponds to 102.5 seconds of real time, with 82 images each taken 1.25 seconds apart stitched together.

After its short time in contact with the surface, a spring mechanism pushed the spacecraft backwards, before it used its thrusters to reach a safe distance above the asteroid.

The swirl of material caused by the spacecraft’s sampling is quite similar to Japan’s Hayabusa2 spacecraft, which successfully performed its own sampling of the asteroid Ryugu last year.

Hayabusa2 was the second asteroid sample mission in history, after Hayabusa1, which returned in 2010 with samples of the asteroid Itokawa. Hayabusa2, meanwhile, will return its samples this December.

But for NASA, OSIRIS-REx signals the first time the U.S. agency has ever attempted to collect samples from an asteroid. If all has gone to plan, we could soon be studying those samples right back here on Earth.

The fight to manufacture COVID vaccines in lower-income countries
SpaceX just marked another huge milestone in the history of crewed spaceflight
UAE real estate shows signs of recovery as Aldar predicts sales surge
In 1181 a rare explosion lit up the sky, and we may have finally found what it left behind
OneWeb’s broadband constellation reaching halfway mark