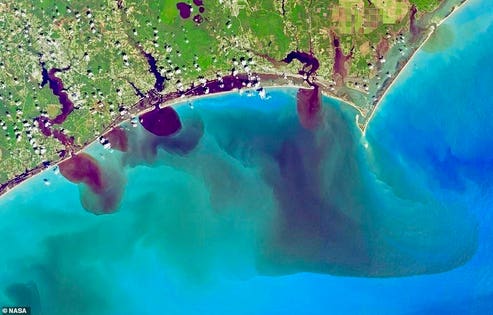 NASA just released a stark comparison of how Hurricane Florence impacted the Carolina coastline as polluted rivers dump into the Atlantic.

As NASA satellites are directed to take time series snapshots of the North Carolina coast, scientists are able to measure and determine the large-scale changes taking place. One of the starkest changes is the sudden influx of river runoff, polluted with decaying organic matter, debris, and plastics.

In total, the Raleigh branch of the National Weather Service estimated that 8 trillion gallons of rain fell on North Carolina during hurricane Florence.

Here’s the unofficial, radar-estimated storm total rainfall from Florence over all NC (actual gauge-measured amounts not included). Using the average rainfall over the state, Florence dropped about 8.04 TRILLION gallons of rain on NC. #ncwx

Wilmington, NC is estimated to have received up to 50 inches of rain in isolated locations. However, the hidden danger is the runoff from the rest of the state as they make their way through tributaries and into the large river basins of North Carolina. This acts to concentrate the water in one source, bringing it through coastal cities and dumping it into the Atlantic Ocean.

As these rivers empty into the Atlantic Ocean, they bring with them massive amounts of suspended load. This is the term for anything that can be carried down the river in suspension. As you can imagine, during normal times the river doesn’t flow fast enough to keep anything but fine silt and clay in suspension. However, during record rain events, these rivers can carry orders of magnitude more in suspension, and thus depositing it into the ocean.

The dark polluted water shown in the NASA photos is a rough indication of organic matter, think plants, organic soils, bacteria, algae, etc. These organic components are also mixed with land pollutants, never meant to reach the Carolina waterways. For example, an estimated 4.1 million chickens and turkeys and 5,500 hogs are estimated to have died in the flooding from Hurricane Florence.

These livestock farms are a significant source of pollutants, especially if they make their way into waterways and into the Atlantic Ocean. Scientists believe the organic matter and pollutant-laden waters likely carry a number of harmful bacteria, which can lead to death.

The image below shows a falsely colored image, where darker brown colors indicate higher concentrations of pollutants and organic matter.

Geologists and oceanographers study events such as these as they represent sudden influxes of organic matter into the ocean. Often times, this leads to a sudden bloom of bacteria, which feeds off this organic matter. As the bacteria grow out of control, they literally suck the oxygen out of the water. This leads to “dead zones” in oceans. The Mississippi River triggers massive dead zones in the Gulf of Mexico regularly as the river drains the agricultural heart of the United States.

We can expect to see beaches with dead fish washed ashore next, as this influx of organic matter and pollutants causes a dead zone along the Carolina coastline. Yet another lingering impact of the deadly Hurricane Florence.

Hidden wine cave, $110 million parking bill: Energy collapse wasn’t only thing that sank Chesapeake
The Loupedeck CT is a fantastic, flexible editing console for Mac and PC
Drugs, money and misleading evidence
Agora starts life as a public company by more than doubling to $50 a share
How Antelopes Overcame Oxygen Deprivation To Thrive On The Tibetan Plateau