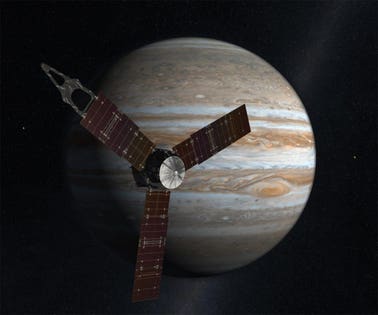 NASA’s Juno spacecraft, which has been orbiting the giant planet Jupiter since summer 2016, is getting dangerously close to challenging other NASA’s planetary spacecraft Cassini and Voyager for true iconic status.

Its little solar-powered probe has just sent back a trove of incredible images from its latest ‘dip’ towards Jupiter, including this incredible image (below) of swirling clouds that surround a circular feature within a jet stream region called ‘Jet N6.’

This color-enhanced image was created by ‘citizen scientist’ Kevin M. Gill image using data from the spacecraft’s JunoCam imager. It was taken on Feb. 12, 2019, as the spacecraft performed its 18th close flyby of the gas giant planet. NASA says that Juno was about 8,000 miles (13,000 kilometers) from the planet’s cloud tops when it snapped the photo.

In November 2018, Juno tool these images of a cloud in the shape of a dolphin appearing to swim through the cloud bands along Jupiter’s South South Temperate Belt.NASA/JPL-Caltech/SwRI/MSSS/Brian Swift/Seán Doran

NASA is making the raw images from JunoCam available online to anyone who wants to look at them, or like Gill, process them. A high-resolution version of Gill’s image is also available to download.

The latest collection of raw images is from what NASA calls Juno’s ‘Perijove 18’. A perijove is essentially a close flyby of Jupiter. Juno is in a big polar orbit of the giant planet, and every 53 days it passes just 3,000 miles shy of Jupiter’s cloud tops. That’s when it’s taking all of its photos, so expect a ‘data dump’ every couple of months.

Juno’s mission was replanned last June after concerns over valves on its fule system.  Either way, Juno will crash into Jupiter in July 2021.

What science is Juno doing at Jupiter?

Juno has nine instruments to help it gather data on the existence of a solid planetary core under Jupiter’s mysterious cloud tops, the amount of water and ammonia in the deep atmosphere, and map Jupiter’s intense magnetic field. It’s also been observing the planet’s auroras.

Are there any other missions planned for Jupiter?

Yes. The European Space Agency (ESA) is planning its JUICE (JUpiter ICy moons Explorer) mission, which is scheduled for launch in June 2022.

Special report: The simulations driving the world’s response to COVID-19
Orbit Fab gets award to test satellite refueling technology
NASA and ESA to fund coronavirus projects
New studies show growing proliferation of anti-satellite weapons
Coronavirus calls us to share more than ever. Here are 10 ways to get started