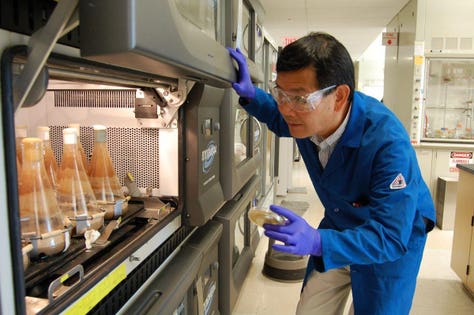 Penicillin and morphine are two ‘naturally derived’ drugs that everyone is likely to recognize. Penicillin originally came from mold, whereas morphine comes from a plant and the highly-controversial use of cannabis and isolated cannabinoids for various medical conditions is a hot topic. However, what may be a surprise is that almost half of all discovered drugs are naturally-derived, with their sources ranging from sea sponges to flowers, bacteria and fungi.

It may seem obvious, but the organisms that produce these drugs must be able to protect themselves from the harmful effects and by studying how they do this, scientists have been able to find out ways in which cancer cells may be able to develop resistance to naturally derived chemotherapies.

Despite the rise of synthetic molecules to treat cancer and innovative approaches such as immunotherapies, many ‘naturally-derived’ chemotherapy drugs are still widely used, sometimes with great success. For example, around 90% of children now survive leukemia and found almost universally in their treatment regimens are two key drugs;  vincristine and daunorubicin, which were originally isolated from the Madagascan periwinkle plant and soil bacteria, respectively.

A new study published today in the journal Cell Chemical Biology showed that some organisms can use a certain set of proteins to bind the toxic substances they produce, which stops them affecting the rest of the organism. The work focused on a particular class of natural products called enediynes, produced by soil bacteria called actinomycetes, two of which are currently FDA-approved cancer therapies; Pfizer’s Mylotarg and Besponsa, both for different types of leukemia. The enediyne is a ‘warhead’ tethered to an antibody which directs it to its target. However, patients who receive these drugs often develop resistance to the chemotherapies after time, allowing their cancer to start growing gain.

The research found three genes in the bacteria which produce proteins allowing them to resist a particular type of enediyne called tiancimycins, previously discovered by the lab and which hold promise as potential new cancer drugs. These protective proteins bind directly to the tiancimycins and stop them from reaching the rest of the organism.

“Thanks to this discovery, we now know something about the mechanisms of resistance that’s never been known before for enediyne antitumor drugs,” said Ben Shen, Professor and research group leader in the Scripps Research Department of Chemistry.

After discovering these protective genes in the actinomycetes bacteria which produce the enediynes, the scientists looked at whether these genes were found in other microorganisms. Surprisingly, they found the genes in a lot of bacteria found in the human microbiome.  Evidence continues to mount suggesting the microbiome is vitally important in conditions ranging from multiple sclerosis to depression and anxiety. Chen speculates that it may be possible for gut microbes to produce these proteins in the human body, potentially affecting the efficacy of enediyne drugs such as Mylotarg and Besponsa, but much more work needs to be done to confirm this in people.

This is not the first time that the microbiome has been implicated in affecting response to chemotherapies. Last year, researchers at the Albert Einstein College of Medicine in New York showed that the microbiome was a likely culprit in making a chemotherapy drug for metastatic colorectal cancer particularly toxic in some patients.

Chen and his team are now working on tethering the tiancimycins to an antibody currently used in the treatment of triple-negative breast cancer and hope that they will be more powerful ‘warheads’ than the other compounds already used in Mylotarg and Besponsa.

“These findings raise the possibility that the human microbiota might impact the efficacy of enediyne-based drugs and should be taken into consideration when developing new chemotherapies. When we take the new drug into human testing, I need to take the microbiome into consideration. If we see two patients, one responds and one doesn’t, I would look at their microbiomes,” said Chen.