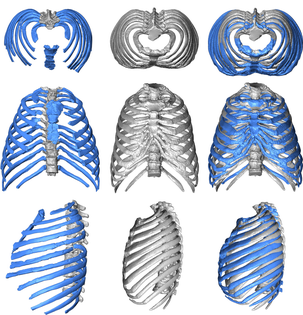 Neanderthals were a species of archaic humans who lived in Eurasia sometime between 450,000 years ago and 45,000 years ago. We not only share a common ancestor with Neanderthals, but around 2% of the genomes of modern Eurasian humans is Neanderthal DNA.

Neanderthal remains were first discovered 150 years ago in the Neander Valley in what is now Germany.  Although more remains have been discovered since then, our understanding of the full skeletal morphology of Neanderthals has remained incomplete. In particular, for the last century and a half, there has been much debate about the exact shape and dimensions of a typical Neanderthal thorax (the rib cage, sternum and upper spine).

Understanding the structure of the Neanderthal chest is important because it can tell us quite a lot about our ancient relatives.

“The shape of the thorax is key to understanding how Neanderthals moved in their environment because it informs us about their breathing and balance,” says Asier Gómez-Olivencia, a paleontologist at the University of the Basque Country in Spain.

Patricia Kramer, an anthropologist at the University of Washington in the US adds that the way Neanderthals moved would have directly impacted their ability to access resources, and therefore survive.

Two years ago, Gómez-Olivencia and Kramer, along with an international team of researchers, used the remains of a 60,000 year old Neanderthal male to create a virtual 3D reconstruction of a Neanderthal spine. Their findings supported the theory that Neanderthals possessed an upright posture, and even suggested that Neanderthals had a straighter spine than modern humans.

Now, using medical computerized tomography (CT) scans of vertebrae, ribs and pelvic bones of the same skeleton, the team has expanded their work to create the first virtual 3D reconstruction of a Neanderthal thorax.

“This was meticulous work,” says Alon Barash at Bar Ilan University in Israel, who collaborated on the project. “We had to CT scan each vertebra and all of the ribs fragments individually and then reassemble them in 3D.”

They also compared the results with CT scans of modern human males of similar stature to the Neanderthal fossil.

They discovered that the Neanderthal thorax did not have a larger volume than that of modern humans, but did have significant differences in structure. For one thing, it was wider at the bottom than the modern human thorax. This suggests a slightly different breathing mechanism compared to our own, as it would have provided greater respiratory capacity during inspiration (breathing in).

Senior author Ella Been at Ono Academic College in Israel explains, “The wide lower thorax of Neanderthals and the horizontal orientation of the ribs suggest that Neanderthals relied more on their diaphragm for breathing.”

“Modern humans, on the other hand, rely both on the diaphragm and on the expansion of the rib cage for breathing. Here we see how new technologies in the study of fossil remains is providing new information to understand extinct species.”

The researchers also found that the Neanderthal’s ribs connected with the spine in an inward direction, meaning that the spine was slightly more indented into the chest cavity than ours.

“The Neanderthal spine is located more inside the thorax, which provides more stability,” says Gómez-Olivencia.

This would have forced the chest cavity to a more outward direction, causing the spine to tilt backwards slightly. The result was a straighter spine. Neanderthals, it seems, did not have as much of a lumbar curve as modern humans have.

Taken together, the findings provide new information about the evolutionary history of Neanderthals, and by extension, provide more insight into our own past.

“Neanderthals are closely related to us with complex cultural adaptations much like those of modern humans, but their physical form is different from us in important ways,” says Patricia Kramer.

“Understanding their adaptations allows us to understand our own evolutionary path better.”

The findings have been published in the journal Nature Communications.