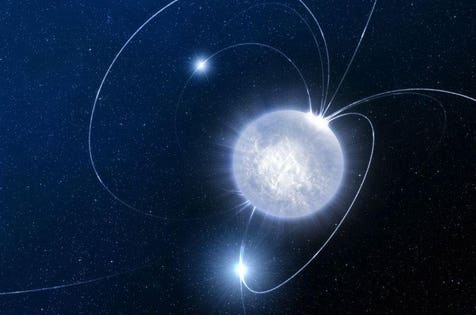 When it comes to stars, there’s a huge variety of different types out there. Our Sun is nothing spectacular, as there are stars both redder and bluer, brighter and dimmer, and more-or-less massive by great amounts. While our Sun will live a total of around 10-12 billion years, some stars may live up to trillions of years, while others will explode or collapse after mere millions. The diversity among stars is enormous.

And yet, many of the objects in the Universe we call stars — like white dwarf stars, brown dwarf stars, neutron stars and more — aren’t actually stars at all. In order to be a star, you need to do more than simply give off light from across the galaxy. Here’s why, according to astronomy, a huge set of objects we call “stars” don’t make the cut.

Take a look inside our Sun. What do you find? Much like Earth, Jupiter, or any very massive object, it’s made up of layers, each of which has different properties. The outermost layers of the Sun’s photosphere are hot at a few thousand Kelvin, but deep inside the inner layers the temperature rises tremendously. All the heat generated in the star’s core has to make its way to the surface to escape, but with so many particles inside, almost all of which are ionized, it can take hundreds of thousands of years for a photon to get out.

The deeper in you go, towards the center of the Sun, the hotter it gets. About halfway down to the core, an important temperature threshold is reached: 4 million K. It’s here that the star-like nature of our Sun reveals itself.

This requires temperatures of about 4 million K to get going, where higher temperatures simply increase the reaction rate. Our Sun’s core reaches a maximum of 15 million K, which explains why it’s about a thousand times brighter than a star that’s at that lower temperature of 4 million K. A star that’s even brighter and hotter than the Sun might be thousands or even millions of times more luminous than the Sun; fusion reactions are highly temperature-dependent.

Stars below about 40% of the Sun’s mass will only fuse hydrogen into helium; they cannot contract and heat up to fuse helium into anything heavier. Stars that are massive enough, like our Sun, will fuse helium into carbon when the core runs out of hydrogen, and stars more than about 8 times as massive as the Sun will go onto fuse carbon into oxygen and still heavier elements. Any star undergoing fusion based on hydrogen, helium, carbon, oxygen, or heavier elements counts as a star. This includes red dwarfs, Sun-like stars, red and blue giants and supergiants, and every single point of stellar light you can see with your eyes in the night sky.

But it doesn’t include every object that has “star” in its name. This deliberately excludes objects that can fuse certain heavy isotopes of hydrogen and helium at lower temperatures, for example. Brown dwarf stars are object more than about 13 times the mass of Jupiter but lower in mass than a true red dwarf star, and can fuse deuterium and sometimes lithium, but never reach that threshold necessary to fuse hydrogen into helium. For objects in this temperature range — where the cores are hotter than 1 million K but below 4 million K — we often consider brown dwarfs to be failed stars, in the sense that if they became more massive and heated up, they could have been low-mass stars, after all.

There are also classes of objects that are still in the process of forming: protostars. Someday in the future, these will likely become stars, as they begin fusing hydrogen into helium in their core. But long before that happens, a large, massive molecular cloud of gas needs to collapse, and this is a problem if you think about energy.

A cloud of gas has lots of potential energy; if it collapsed under its own gravity, it would convert that into some other form of energy. That energy needs to be radiated away to make a stable, contracted object, like a star. So what happens? It has to release energy in the form of light and heat. These protostars, therefore, can illuminate the cosmos just like stars can, but they get their energy from gravitational collapse, rather than from fusion.

In most cases, these protostars will go on to become true stars, as the fusion of protons into helium (and, potentially, beyond) will occur. But for 10 to 15 million years, the conversion of gravitational energy into electromagnetic energy is what powers them. Stars that are Sun-like (no more than double the Sun’s mass) are known as T Tauri stars; more massive ones are Herbig stars. Both of these are misnomers, however, since they lack the fusion necessary to be classed as true stars.

They’ll almost always get there, eventually, but just as an egg is not a chicken, a protostar is not yet a star.

Finally, there are the remains of stars. Sun-like stars will end their lives in a white dwarf phase, where the used-up core of stellar fuel contracts down to no bigger than the size of planet Earth. These objects will remain hot and luminous for hundreds of trillions of years, but they generate no new energy of their own. They simply shine based on the energy they were born with, when the stars that created them died. White dwarf stars — and their far-future versions known as black dwarfs — are stellar remnants, rather than true stars themselves.

Even when matter accretes on the surface of a white dwarf and flares up with fusion, creating a nova, it cannot be considered a star. Stars have fusion occur in their core; surface fusion simply will not do.

Most spectacular is the neutron star, created by the massive implosion of a supernova’s core. Up to 2.5 solar masses of material can be collected in a sphere just a few kilometers in radius, spinning at up to 2/3rds the speed of light. Denser than an atomic nucleus, a neutron star is one of the most extreme objects the Universe has to offer, and neutron star-neutron star collisions give rise to the majority of the heaviest elements in the Universe today.

There is a lesson here that all scientists should be aware of: it doesn’t matter how you name or classify something that you’re studying. Rather, it matters that you understand the properties that it does and doesn’t have. Whether you classify Pluto as a planet or not isn’t what’s important; understanding its physical and orbital properties are. Whether you classify a virus as life or non-life isn’t nearly as important as understanding its structures, functions, and impacts on the environment and the organisms within it. Not every object with “star” in its name fuses hydrogen into helium, helium into carbon, or heavier elements into still heavier ones, but white dwarfs, neutron stars, brown dwarfs, and protostars are no less spectacular for it. Not everything is a star, and that’s a good thing. Every object plays its own unique role in the cosmic story that’s created us.