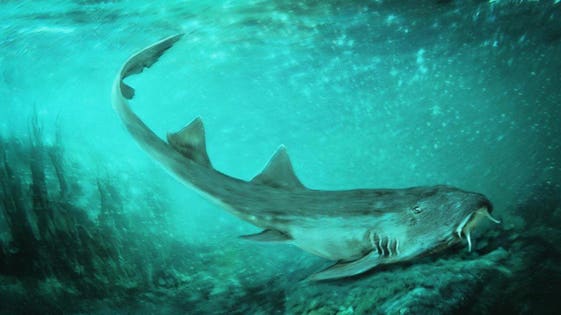 What does Sue the T. Rex and a shark have in common? They were both found in the same mud pit!

While Sue may not need an introduction (she is the largest and most complete fossil of a T. Rex), Galagadon nordquistae needs a warm welcome, as the newly described shark is shaking up the scientific world with its unusual name. The teeth of this freshwater shark from the Cretaceous Period resemble that of a space-fighter of the iconic 1980’s video game, Galaga, and were the inspiration for the scientific name. According to researchers, this shark called the Cretaceous rivers of South Dakota home about 67 million years ago. A rather small shark, it may have only been a maximum of 18 inches in length, and probably loved to munch on small fish, snails, and crayfish.

An illustration showing what Galagadon would have looked like.Velizar Simeonovski / Field Museum

The new findings were published in the Journal of Paleontology, and Velizar Simeonovski’s illustration makes it seem… well, like a modern-day shark! In fact, the researchers say that Galagadon nordquistae is related to modern-day carpet sharks in the order Orectolobiformes, like the zebra shark (Stegostoma fasciatum), the ornate wobbegong (Orectolobus ornatus), and the whale shark (Rhincodon typus). Are the sharks that roam the oceans today a clue to how sharks in the past looked like? Possibly.

Afterall, all we have left of Galagadon nordquistae is teeth! Tiny teeth, not a skeleton, unlike Sue. The sassy tyrannosaurus remains (well, she’s sassy on Twitter) were discovered in 1990 in South Dakota. The leftover sediment from the Hell Creek Formation was stored at the Field Museum in Chicago, and it was in this two-ton pile of sediment (called matrix) where the shark teeth were found. The species name, nordquistae, honored museum volunteer Karen Nordquist for finding the first fossilized tooth. “It was so tiny, you could miss it if you weren’t looking really carefully,” Nordquist said in a press release. “To the naked eye, it just looks like a little bump, you have to have a microscope to get a good view of it.” In fact, the teeth are less than a millimeter across!

“This shark lived at the same time as Sue the T. Rex, it was part of the same world,” said Pete Makovicky, the Chicago Field Museum’s curator of dinosaurs and one of the authors of a study, in a press release. “Most of its body wasn’t preserved, because sharks’ skeletons are made of cartilage, but we were able to find its tiny fossilized teeth.” Therefore, the teeth were the only clue for paleontologist Terry Gates and colleagues to infer the size, shape, and behavior of Galagadon. How? They compared the teeth of this shark with those of similar shark species, both extinct and extant.

One of the Galagadon teeth found.(c) Terry Gates

Not only is Galagadon an interesting find, but it sheds light to the world that Sue lived in. Before the discovery of this new shark, it was thought that she lived and died near a lake. “It may seem odd today, but about 67 million years ago, what is now South Dakota was covered in forests, swamps and winding rivers,” said Gates in a statement. Galagadon’s existence means this area may have been connected to the ocean, possibly by a river, which let those sharks to move inland and evolve to live in freshwater. While most people believe you can only find sharks in the ocean, but today there are sharks that travel between salt and freshwater, as well as species that live exclusively in fresh water. Those that live exclusively in fresh water are mostly found in Central and Southeast Asia and Australia, and include the Ganges shark (Glyphis gangeticus), the northern river shark (Glyphis garricki), and the speartooth shark (Glyphis glyphis). The Ganges shark, which is often mistaken for the bull shark (Carcharhinus leucas), made the news in 2017 when the first record from anywhere in its range in over a decade was reported from the Arabian Sea in a fish market.

Galagadon is not the only new species of shark to be discovered in 2019! A new species of whaler shark, scientifically named Carcharhinus obsolerus, is known only from the Western Central Pacific only from historic records. This species has not been recorded anywhere in over 80 years!

So next time you look at a fighter spaceship… maybe think of this jawsome ancient shark, too.