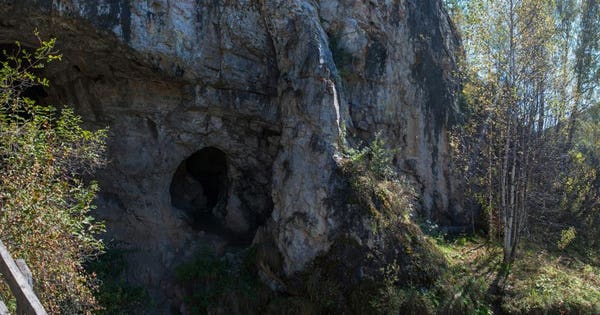 Denisova caves is a cave system in the Altai mountains, Siberia, Russia. The cave is of great paleoarchaeological and paleontological interest. photo credit: GettyGetty

Denisova Cave, located in the foothills of the Altai mountains, is an extraordinarily important place in the history of human evolution. For over 300,000 years, this cave was the home to various groups of archaic hominins. These hominins included our close relatives, the Denisovans and Neanderthals, whose genomes show a history of interbreeding with each other (and with some anatomically modern human populations). In 2018, DNA was recovered from the remains of a child of a Neanderthal mother and a Denisovan father (who himself had Neanderthal ancestry), suggesting that these interactions may have been common.

But for all we know about Denisovans and Neanderthals on a genetic level, there still remain many unanswered questions about their histories. One of the most fundamental is: what exactly was going on in Denisova Cave, and when? We know surprisingly little about who lived in the cave over different periods throughout its history, including when exactly the different human groups lived there (and whether they overlapped).

Answering these very basic questions has been surprisingly difficult. Many of the skeletal remains found in the cave are older than 50,000 years, the upper limit of carbon-14 dating. On top of that, it’s become clear that the layers within the cave are quite mixed due to burrowing animals and geological processes, making the stratigraphy incredibly complex to sort out. However, two articles published just last week in the journal Nature (Jacobs et al. 2019, Timing of archaic hominin occupation of Denisova Cave in southern Siberia, and Douka et al. 2019, Age estimates for hominin fossils and the onset of the Upper Paleolithic at Denisova Cave) go a long way towards resolving the chronology of occupation of the cave.

Jacobs and colleagues used thermoluminescence dating, which can determine how long it’s been since individual quartz crystals were last exposed to light, to help understand the complex stratigraphy of the Pleistocene deposits in the cave. By correlating dated strata with fossil remains and DNA present in the soil, they were able to determine that Denisovans were living in the cave by at least 200,000 years ago and probably persisted until about 55,000 years ago. Neanderthals lived in the cave between around 190,000-100,000 years ago. Denisovan and Neanderthal DNA recovered from soil in layers of the cave dating to the same time period confirms overlapping occupations of the cave by the two groups.

The other team of researchers, Douka and colleagues, radiocarbon dated the younger (late Middle and Upper Paleolithic) layers of the cave, as well as some bone fragments, and used a Bayesian modeling approach to combine data from multiple kinds of dating methods (including radiocarbon, thermoluminescence, and genetic) to identify the best supported estimates of occupation history in the cave. Their best-supported model, that takes into account the dates obtained by Jacobs et al., indicates that Neanderthals and Denisovans lived in the same region for an extended period of time. At some point, Neanderthals stopped living in the region, but Denisovans persisted until at least 76,200-51,600 (the age of the last known Denisovan fossil). Interestingly, Douka and colleagues note that the most recent admixture event between Denisovans and modern humans is dated to later than that (somewhere between 54,000-31,000 years ago), suggesting that a different Denisovan population may have participated in that event.

Readers who are paying careful attention may notice that I haven’t said anything about anatomically modern humans in this cave. That’s because no modern human remains have been found in the Altai region dating to the Upper Paleolithic—only artifacts, such as bone pendants and tools, which Douka et al. dated to between 49,000-34,000 years ago. At other sites, these Upper Paleolithic artifacts have indeed been found in association with early modern humans, and the dates of the Denisovan artifacts overlap with those for the Ust’-Ishim man (47,000-43,000 years ago), an early modern human from western Siberia, whose genome shows clear traces of Neanderthal ancestry. But as yet there’s not quite enough evidence to definitively settle the question as to whether modern humans or Denisovans made these particular artifacts. Understanding how such culture was shared—or not—between different human groups may be possible through the future collaborative efforts of both archaeologists and geneticists.