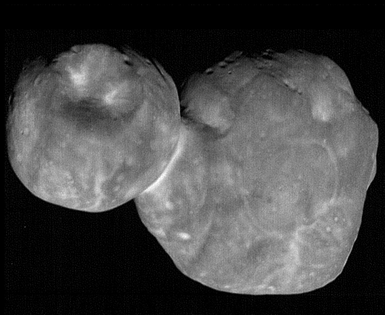 NASA’s New Horizons has beamed back its crispest pictures yet of the farthest object in space ever explored in one of those casual feats of human ingenuity.

The probe snapped the sharpest image of the Kuiper Belt space rock Ultima Thule with its Long-Range Reconnaissance Imager (LORRI) just 6.5 minutes before its closest approach to the object on January 1, but only beamed them back this week.

While it might seem like just another, admittedly cool, space image, getting a picture at a resolution of 110 feet per pixel took quite a lot of innovation and timing.

The most detailed images of Ultima Thule — obtained just minutes before the spacecraft’s closest approach at 12:33 a.m. EST on Jan. 1 — have a resolution of about 110 feet (33 meters) per pixel. Their combination of higher spatial resolution and a favorable viewing geometry offer an unprecedented opportunity to investigate the surface of Ultima Thule, believed to be the most primitive object ever encountered by a spacecraft.
This processed, composite picture combines nine individual images taken with the Long Range Reconnaissance Imager (LORRI), each with an exposure time of 0.025 seconds, just 6 ½ minutes before the spacecraft’s closest approach to Ultima Thule (officially named 2014 MU69). The image was taken at 5:26 UT (12:26 a.m. EST) on Jan. 1, 2019, when the spacecraft was 4,109 miles (6,628 kilometers) from Ultima Thule and 4.1 billion miles (6.6 billion kilometers) from Earth. The angle between the spacecraft, Ultima Thule and the Sun – known as the “phase angle” – was 33 degrees. (Credit: NASA/Johns Hopkins Applied Physics Laboratory/Southwest Research Institute, National Optical Astronomy Observatory)NASA/Johns Hopkins Applied Physics Laboratory/Southwest Research Institute, National Optical Astronomy Observatory

“Getting these images required us to know precisely where both tiny Ultima and New Horizons were — moment by moment – as they passed one another at over 32,000 miles per hour in the dim light of the Kuiper Belt, a billion miles beyond Pluto. This was a much tougher observation than anything we had attempted in our 2015 Pluto flyby,” explained New Horizons Principal Investigator Alan Stern, of the Southwest Research Institute (SwRI), in a statement.

“These ‘stretch goal’ observations were risky, because there was a real chance we’d only get part or even none of Ultima in the camera’s narrow field of view,” he continued. “But the science, operations and navigation teams nailed it, and the result is a field day for our science team! Some of the details we now see on Ultima Thule’s surface are unlike any object ever explored before.”

Ultima Thule is potentially the most primitive object ever encountered by a spacecraft and studying it could answer important questions about what our Solar System was like at its birth. It’s part of a class of Kuiper Belt objects called the “Cold Classicals”, which have nearly circular orbits with low inclinations to the solar plane, and which have not been perturbed since their formation perhaps 4.6 billion years ago.

The high resolution flyby shot brings out many surface features that scientists couldn’t make out before, including several bright, enigmatic, roughly circular patches of terrain and a better view of the small, dark pits near the terminator (the boundary between the sunlit and dark sides of the body).

“Whether these features are craters produced by impactors, sublimation pits, collapse pits, or something entirely different, is being debated in our science team,” said John Spencer, deputy project scientist from SwRI.

Every part of the Ultima flyby has broken new ground in space exploration. Getting close to the object required the highest navigation precision ever achieved by a spacecraft. Ground-based occultation campaigns had to be carried out in Argentina, Senegal, South Africa and Colombia in 2017 and 2018 to make it happen, using the European Space Agency’s Gaia mission, which provided the locations of the stars.

Critical research hit as COVID-19 forces physics labs to close – Physics World
Mathematical proof that rocked number theory to be published
How tech is helping to change the way people think about the food on their plate
GOP senator calls on Saudis to end its oil price war, says ‘Americans died’ protecting the kingdom
Domo, Covestro, BASF are testing blockchain for tracing plastics