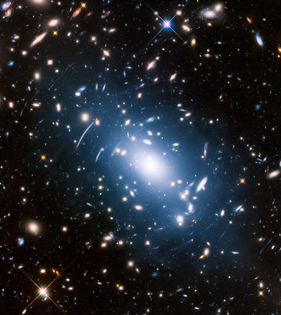 This image showcases the massive, distant galaxy cluster Abell S1063. As part of the Hubble Frontier Fields program, this is one of six galaxy clusters to be imaged for a long time in many wavelengths at high resolution. The diffuse, bluish-white light shown here is actual intracluster starlight, captured for the first time. It traces out the location and density of dark matter more precisely than any other visual observation to date.

Dark matter is one of the greatest mysteries in the Universe, displaying its effects in every massive, large-scale cosmic structure.

In theory, the majority of dark matter in any galaxy exists in a vast halo engulfing the normal matter, but occupying a much larger volume. While large galaxies, clusters of galaxies, and even larger structures can have their dark matter content determined indirectly, it’s challenging to trace out the dark matter distribution accurately.

It neither emits nor absorbs light like normal matter does, but its gravitational impact is undeniable.

The galaxy cluster MACS 0416 from the Hubble Frontier Fields, with the mass shown in cyan and the magnification from lensing shown in magenta. That magenta-colored area is where the lensing magnification will be maximized. Mapping out the cluster mass allows us to identify which locations should be probed for the greatest magnifications and ultra-distant candidates of all.

Forming large halos around individual galaxies, it hold galaxy clusters and the great cosmic web together.

Large scale projection through the Illustris volume at z=0, centered on the most massive cluster, 15 Mpc/h deep. Shows dark matter density (left) transitioning to gas density (right). The large-scale structure of the Universe cannot be explained without dark matter. The full suite of what’s present in the Universe dictates that structure forms on small scales first, eventually leading to progressively larger and larger ones.

By measuring the distorted light from distant galaxies behind a galaxy cluster, scientists can reconstruct the total cluster mass.

Any configuration of background points of light, whether they be stars, galaxies or galaxy clusters, will be distorted due to the effects of foreground mass via weak gravitational lensing. Even with random shape noise, the signature is unmistakable. By examining the difference between foreground (undistorted) and background (distorted) galaxies, we can reconstruct the mass distribution of massive extended objects, like galaxy clusters, in our Universe.

In every galaxy cluster, the majority of the mass is outside of the galaxies: there is a huge dark matter halo.

A galaxy cluster can have its mass reconstructed from the gravitational lensing data available. Most of the mass is found not inside the individual galaxies, shown as peaks here, but from the intergalactic medium within the cluster, where dark matter appears to reside. The time-delay observations of the Refsdal supernova, for example, cannot be explained without the presence of dark matter.

The intracluster gas, however, may be distributed differently, as normal matter can collide and heat up, emitting X-rays.

Four colliding galaxy clusters, showing the separation between X-rays (pink) and gravitation (blue), indicative of dark matter. On large scales, cold dark matter is necessary, and no alternative or substitute will do. However, mapping out the X-ray light (pink) is not necessarily a very good indication of the dark matter distribution (blue).

But individual stars, ejected from galaxies, should trace the same path as the dark matter.

A merging galaxy cluster in MACS J0416.1-2403 exhibits a different, smaller separation of X-ray gas from the gravitational signal, but this is expected, as this cluster is in a different stage of its merger, and there is still an offset between where the normal matter (in X-rays) and the total mass (from lensing; in blue) is located.

In a cosmic first, scientists measured this intracluster light, and found it traces out the dark matter perfectly.

This is the same galaxy cluster, MACS J0416.1-2403, except with the intracluster light showcased in bluish/white color. This light is a far superior tracer of the dark matter than the X-rays or galaxies are, and offers an exciting new way to probe/measure the dark matter in the Universe.

Their locations are identical because both “are free-floating on the gravitational potential of the cluster itself,” elucidates co-author Mireia Montes.

Six ultra-distant galaxy clusters in a variety of post-collisional stages were imaged by the Hubble Space Telescope as part of its Frontier Fields program. The survey, which went fainter on these relatively wide-angle scales than any before, was able to reveal intracluster light as well in two of them. Moving forward, this new method may provide a fast, accurate, and revolutionary way to infer the existence, distribution, and density of dark matter in these massive cosmic structures.

Because both the stars and the dark matter follow the same gravitational paths, this diffuse starlight matches the reconstructed cluster lensing profiles.

The galaxy cluster Abell 370, shown here, was one of the six massive galaxy clusters imaged in the Hubble Frontier Fields program. Since other great observatories were also used to image this region of sky, thousands of ultra-distant galaxies were revealed. By observing them again with a new scientific goal, Hubble’s BUFFALO (Beyond Ultra-deep Frontier Fields And Legacy Observations) program will obtain distances to these galaxies, enabling us to better understand how galaxies formed, evolved, and grew up in our Universe. When combined with intracluster light measurements, we could gain an even greater understanding, via multiple lines of evidence of the same structure, of the dark matter inside.

This is the fastest, most accurate visual signature ever used to successfully identify dark matter.

The technique of measuring intracluster light to infer the presence of dark matter has been successfully demonstrated for these two galaxy clusters in the distant Universe. Many astronomers believe that this will be a powerful tool in their arsenal with larger-scale, next-generation space and ground-based telescopes to explore the nature of dark matter.