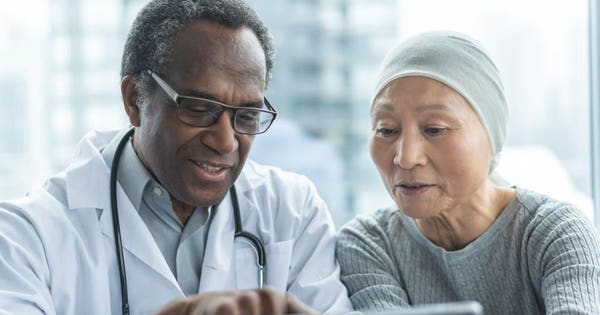 The research published today in Science Translational Medicine is a collaborative effort between the Translational Genomics Research Institute (TGen), an affiliate of City of Hope in California and the Mayo Clinic in Arizona and the Cancer Research UK Cambridge Institute in the U.K.

The test called “TARDIS” (TArgeted DIgital Sequencing) has been suggested to be up to 100 times more sensitive than other existing blood-based cancer monitoring tests. It works by looking for tiny fragments of DNA which come from a patients tumor, but are found in the bloodstream called “circulating tumor DNA (ctDNA),” and has been described to pick up as little as 2 parts of ctDNA in 100,000.

“By precisely measuring ctDNA, this test can detect the presence of residual cancer, and inform physicians if cancer has been successfully eradicated by treatment,”  said Muhammed Murtaza, PhD, assistant professor and co-director of T-Gen’s Center for Noninvasive Diagnostics and one of the study’s senior authors.

Liquid biopsies are an extremely hot and occasionally controversial topic in the biotech world, but many of them have been developed to detect cancers in those with established, advanced disease.

“Until now, blood tests for breast cancer have only been sensitive enough to reliably identify tumor DNA in people with advanced disease. We’ve shown that TARDIS is able to detect circulating DNA at extremely low concentrations in the blood, opening up the possibility of monitoring patients with early-stage breast cancer to find out how their disease is responding to treatment” said Murtaza.

TARDIS is more precise than other cancer blood tests as it uses DNA sequencing data taken from a traditional needle biopsy of each individual patient’s tumor and then uses computer algorithms to identify mutations likely to be present in all cancer cells and hence, ctDNA in the blood.

The study used blood samples from 33 breast cancer patients treated at either Addenbrookes Hospital in the U.K., the Mayo Clinic in Arizona or at City of Hope in California and looked for specific mutations known to be found in breast cancer. At diagnosis, TARDIS detected significant amounts of breast cancer DNA in all patients. 22 of these people were then treated with neoadjuvant chemotherapy, a first step of treatment for some patients to reduce the size of a tumor before surgical treatment.

Around a third of patients treated with neoadjuvant chemotherapy achieve a complete response to the therapy, meaning when they do have breast surgery, there is no visible evidence of the tumor in the removed breast tissue. In these people, TARDIS detected a far smaller amount of tumor ctDNA than in the two-thirds of people where tumor is still detectable in the breast tissue removed by surgery. Currently, doctors and surgeons have no way of reliably detecting who these 30% of people are who have responded so well to neoadjuvant chemotherapy that they may not need the invasive surgical procedure, but they hope that TARDIS may change this.

“This could be a game-changer. Instead of patients undergoing six to eight cycles of chemotherapy (15-21 weeks of treatment), after one or two cycles (3-6 weeks) we would use the TARDIS test to look for a significant drop in circulating tumor DNA. If a drop was not detected, the treatment could be stopped or changed,” said Professor Carlos Caldas, director of the Breast Cancer Program at the Cancer Research UK Cambridge Center, who was an author of the study.

There are many liquid biopsy tests in development, some for particular cancer types or personalized to individual patients and some which aim to do early detection of a number of different cancer types. So what makes TARDIS so unique?

“The difference is the sensitivity,” said Michael Melner, PhD, Director of the Molecular Genetics and Biochemistry of Cancer Program in the extramural grants department at the American Cancer Society. “There is always limits to monitoring – ctDNA is diluted out into the total volume of blood. The difference in this test is that they are utilizing specific known mutations based on the original sequencing of the tumor of the DNA and then amplifying these specific regions of DNA that are only amplified if this DNA mutations are present.”

The researchers now plan to expand their research in a new, larger study involving over 200 people to prove the effectiveness of the test and to try to further figure out exactly what level of ctDNA in the blood would reliably indicate to physicians that neoadjuvant chemotherapy prior to surgery has been successful.

“This is very interesting and opens a window to the potential that you might be able to monitor residual disease in a more accurate manner. There’s a range of questions that come up, like determining the accuracy and sensitivity which need to be further validated to check its truly that sensitive. This is an initial foray and there is a lot of work that needs to be done to validate it. Then there are considerations of cost and the ability of actual centers to implement,” said Melner.

If it does prove successful in a larger study, what needs to be done next to scale the technology up to make it widely available?

“At this stage, it is a proof of principle, can it work? Its very difficult to extrapolate from what they’ve done into a functional system, but some of the calculations of costs have to take into account the cost of over treatment. If, for example, 30% of breast cancer patients get total response to the original neoadjuvant chemotherapy and you still go on to treat these patients with very expensive surgeries, radiation etc, this needs to go into the calculation also. Also the point that you may be able to save women from the damaging effects of secondary treatments,” said Melner.

The early work on this test is a promising look at whether physicians may in the future be able to get a detailed snapshot about how patients have responded to treatment without surgery or scans which can often not pick up small numbers of residual cancer cells, but some people have urged caution when interpreting these early results.

“It is very controversial among surgeons and oncologists about whether it is safe to avoid surgery in women who have had a complete radiological response,” said Liz O’Riordan, a Consultant Breast Surgeon from the U.K. with recurrent breast cancer. ”There is always the risk that there may be cells in the breast that are left behind and the surgical community is undecided. This may be an option in the future, as part of a trial, but should not be offered as a nirvana,” she added.

Most women with breast cancer are diagnosed with early stage disease, although Only 20-30% of women with more aggressive disease or larger tumors undergo adjuvant chemotherapy treatment before surgery.

“Surgery is the mainstay of breast cancer treatment. Other treatments, like chemo and radiotherapy and hormone therapy are added to surgery to increase survival. I can’t see a time where we would monitor a breast cancer tumor by blood tests alone and not operate. Most early stage breast cancer patients have a lumpectomy and radiotherapy – not very invasive and over in 2 months – so they don’t really need tracking – unless the blood test will be used to screen for recurrence and pick it up at a much earlier stage before women and men become symptomatic,” said O’Riordan.

“However, using the blood test to track the response of the tumor during chemo (if given before surgery), or the response after chemo, could improve future treatment options,” she added.