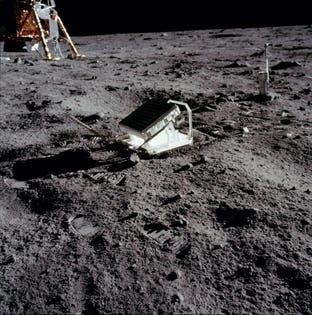 Fifty years after Armstrong and Aldrin placed the first lunar retroreflectors about a hundred feet from their lunar module, NASA has funded a set of Next-Generation Lunar Retroreflectors (NGLRs) to be delivered on future flights via the space agency’s Commercial Lunar Payload Services (CLPS) project.

An international team led by the University of Maryland in College Park says that the NGLRs will serve as targets for lasers on Earth to precisely measure the Earth-Moon distance; further constrain the lunar interior; and, even address fundamental physics questions. But the heart of the NGLR is the classic, cube corner retroreflector, a special glass prism that sends light back the way it came.

Known as lunar laser ranging, it works like this: A laser pulse which shoots out of a telescope on Earth, crosses the Earth-Moon divide, and hits the array, NASA explains. Because the mirrors are “corner-cube reflectors,” they send the pulse straight back where it came from. Telescopes then intercept the returning pulse which NASA says is usually just a single photon. But it’s this round-trip travel time that enables researchers to pinpoint the Moon’s distance with staggering precision; typically to better than a few centimeters.

There are currently five retroreflectors on the Moon: three from Apollo 11, 14, and 15; and two French-designed instruments which arrived on the robotic Soviet lunar missions Lunakhod 1 and Lunakhod 2. A two-foot-wide panel ‘studded’ with 100 mirrors, the original Apollo 11 retroflector cube is still functioning today .

NASA says, among other things, the retroreflectors have taught us that the Moon is spiraling away from Earth at a rate of 3.8 centimeters per year; the Moon likely has a liquid core; and . the universal force of gravity is extraordinarily stable.

Yet there has been a sea change in laser and timing technology since the original retroreflectors were deployed. Existing lunar retroreflectors cannot fully take advantage of these improvements, Douglas Currie, the NGLR’s Principal Investigator, and a University of Maryland physicist told me.

Earth-based lasers hit only one of these Apollo-era corner cubes and it’s impossible to know which one. That leads to uncertainty in the cube’s exact location on the Moon. Thus, timing of the laser ‘returns’ from the Moon to Earth using the old Apollo retroreflectors is hamstrung in their precision.

How will these new retroreflectors be an improvement over the originals?

The most important innovation consists of changing from a panel of small cube corner retroreflectors (CCRs) to a single large CCR. The NGLR’s CCR is special fused silica glass that also has fewer internal imperfections than the silica used for the Apollo CCRs.

As for their deployment?

The goal is to have three NGLRs deployed by a different commercial carrier mission at different lunar locations in order to increase the area of the Moon covered by the existing retroreflector network. Although these new retroreflectors will enable new tests of General Relativity and may even shed light on dark matter, they will also aid in NASA’s efforts to return crews to the lunar surface. This includes mapping and navigation capabilities.

Currie hopes that NASA will choose to deploy an NGLR to coincide with the planned 2024 crewed NASA mission to the Moon’s South Pole.

The unique role of the lunar laser retroreflectors is to provide a fixed reference point on the Moon’s surface, says Currie. But hitting these retroreflectors with a laser pulse is no small feat .

To do so, a lunar laser ranging observatory must generate extremely short laser pulses capable of hitting a moving target with an accuracy equivalent to striking a dime at a distance from New York to San Francisco.

Then to within accuracies of a few billionths of a second, we must determine the interval between the time the pulse leaves the telescope and the time it returns to Earth, says Currie.