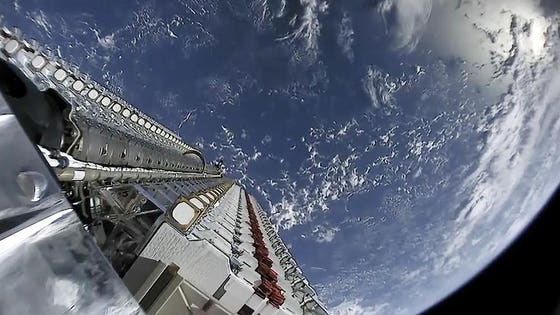 The satellites were launched in a large stack on a Falcon 9 rocket.

SpaceX says that three of its 60 controversial Starlink satellites have failed in orbit, as the company moves towards the first broadcasting test of its ambitious space internet constellation.

In a statement, the U.S.-based company revealed that 57 of its Starlink satellites were successfully communicating with stations back on Earth. Of these, 45 had reached their desired altitude of 550 kilometers with their onboard propulsion systems, five were still raising their altitude from initial orbits of 440 kilometers, and a further five were going through tests before doing so.

The company also revealed that two satellites would be deorbited on purpose “to simulate an end of life disposal”. And the company said that three of its satellites were “no longer in service” and would “passively deorbit” from their current altitude of about 440 kilometers, as the loss of contact meant the satellites could not be directed to use their onboard ion propulsion systems to manually deorbit.

The launch of these first 60 Starlink satellites occurred about a month ago on May 23. Since then SpaceX has been testing their capabilities, and will soon begin examining how well they can broadcast the internet to the ground. In the statement, the company said it would test their latency by “streaming videos and playing some high bandwidth video games”.

But the failure rate so far of the satellites will be some cause for concern. Each satellite lacks a redundancy deorbit system in the event they fail, meaning the three satellites that have failed so far will simply be left in orbit to gradually descend and burn up in the atmosphere due to atmospheric drag, which could take about a year.

And a 95% success rate for Starlink so far, while high, is not perfect. With the company hoping to launch a grand total of 12,000 Starlink satellites by the early 2020s, operating at altitudes from 550 to 1,100 kilometers, that would equate to 600 dead satellites left in orbit.

“From my perspective, three spacecraft that are essentially ‘dead on arrival’ is not where SpaceX need to be with Starlink,” says Hugh Lewis from the University of Southampton in England, who works on modeling space debris. “I expect there to be other failures given that we are still at the beginning of the mission for most of the spacecraft and there are still many opportunities for problems.”

It’s worth noting this first batch of Starlink satellites is very much a test, and SpaceX will attempt to improve the reliability of the satellites in future based on the results from this initial launch. But with such a large number of satellites being planned, there have been considerable concerns about space junk from vast constellations like this.

A variety of other companies including OneWeb and Amazon also have their own plans for mega satellite constellations, with the goal of beaming internet to the ground to provide global high-speed satellite internet cover. If all these constellations come to fruition, they would add about 20,000 satellites into orbit; currently there are only 2,000 active satellites.

There have been concerns from the astronomy community too, with astronomers noting that the satellites were brighter than they expected, and thus could hamper observations of the night sky. In an effort to allay these concerns, SpaceX said it was monitoring the visibility of the satellites as they were raised to their final orbits.

“We have also proactively reached out to leading astronomy groups from around the world to discuss the Starlink mission profile, scientifically assess the impacts on astronomy activities and evaluate any helpful mitigations moving forward,” SpaceX added, noted Business Insider.

But it is the space junk concerns that are the current pressing issue, and SpaceX will need to prove they can address these failures on their future satellites to reduce the number of dead satellites in orbit. With no redundancy deorbit system on board, compared to others such as OneWeb who will have a handle on board each satellite that can be grabbed, any Starlink satellites that fail will simply be left in orbit until they re-enter the atmosphere on their own.