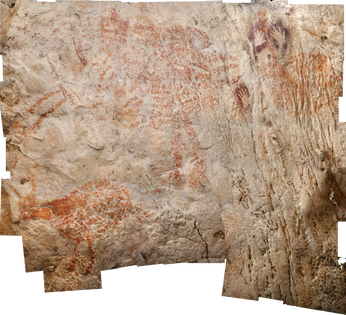 The oldest known figurative cave art has been discovered on the island of Borneo, Indonesia. The finding adds to the evidence that simple art is an ancient ability, and may even predate our species.

On the wall of a Bornean cave called Lubang Jeriji Saléh, there is a faded drawing of a four-legged animal, which vaguely resembles a cow. It has been known since the 1990s but it was unclear how old it was.

To find out, a team led by Maxime Aubert of Griffiths University in Queensland, Australia studied a thin layer of calcite, which overlies the painting. Calcite forms when water drips and trickles over the rock, leaving behind trace amounts of minerals that slowly build up. It can be dated by examining the decay of radioactive uranium.

Aubert’s team found that the calcite, and therefore the painting beneath it, is at least 40,000 years old. The painting could be older, because we don’t know how long it took for the calcite to form.

There are also a number of hand stencils, one of which could be as much as 52,000 years old. These are simpler forms of art, so it would make sense that people started making them before they figured out how to draw animals.

The findings were published yesterday in Nature.

This is just the latest example of archaeologists discovering the oldest example of one form of art or another. Several such finds have made the news over the last year. It has all got quite confusing so here is a quick rundown.

The painting in Lubang Jeriji Saléh is the oldest known piece of “figurative art”, meaning that it depicts something drawn from life in a realistic way. The painting may be crude to our eyes, but it’s the precursor to the portraits of Rembrandt and the landscapes of J. M. W. Turner.

It seems to have been part of a rich artistic tradition in prehistoric south-east Asia. On the neighbouring island of Sulawesi, caves also contain startling drawings, including a hand stencil that is at least 39,900 years old.

Presumably this artistic movement was entirely separate to the one that flourished in western Europe, culminating with the extraordinary animal paintings in caves like Chauvet and Lascaux in France. This occurred at roughly the same time, but thousands of kilometres away.

However, there is older art. It just isn’t figurative. In Maltravieso cave in western Spain, there is a hand stencil that is 66,700 years old. Described in February 2018, this is currently the oldest known cave art. Since it predates the arrival of modern humans in Europe, it was almost certainly painted by a Neanderthal, making it the first hard evidence that another hominin species could make art.

Going even further back, a piece of loose rock found in Blombos Cave in South Africa bears a simple cross-hatched doodle composed of nine red lines. Also described in February, it is 73,000 years old, making it the oldest known drawing. A similar hashtag-like scratching has been found in Gorham’s Cave, Gibraltar. It is at least 39,000 years old and was probably made by a Neanderthal.

Finally, we can plunge so far back in time that our species had not yet arisen. A clam shell found on the island of Java, Indonesia turns out to be about 500,000 years old. It has a simple zigzag shape scratched into it, using a shark’s tooth. We do not know who did this, but the most likely candidate is a Homo erectus, a species of hominin that is known to have lived in the area at this time.

If we take this evidence at face value, it leads to a startling conclusion. Artistic expression, something most of us would consider to be unique to our species, is older than we are. Homo sapiens arose perhaps 350,000 years ago in Africa, but we may have had the mental seeds for our later artistic efforts already in place.

That would explain why a Homo erectus – a species often touted as our direct ancestor – was scratching symbols into shells millennia before we existed. It would also explain why our close cousins the Neanderthals could also make art. Either they developed the ability independently of us, or they inherited it from the ancestor we both share.

If this interpretation is correct, art has its origins in pre-human species.