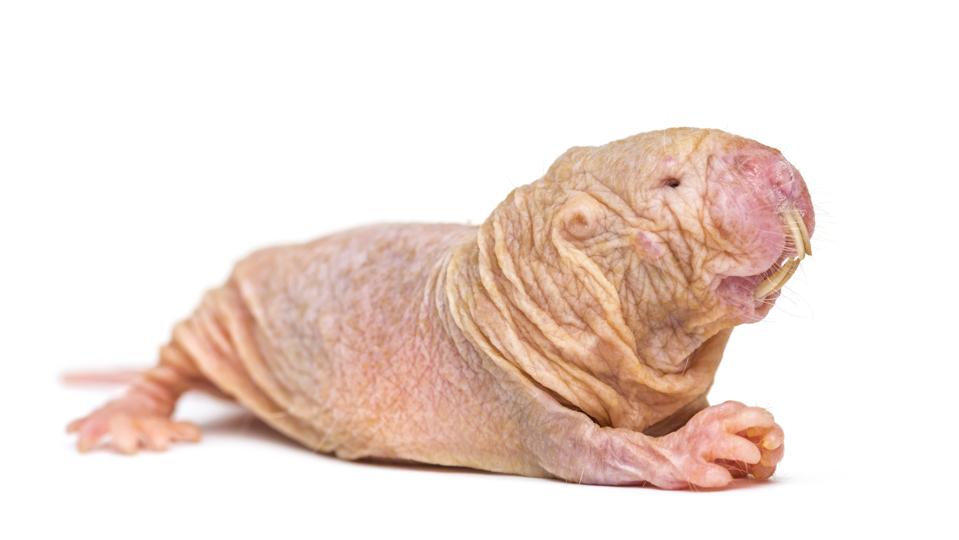 Naked mole-rats are mostly hairless, mouse-sized rodents with rat-like tails. Nicknamed “sand puppies,” they live in labyrinth, completely dark burrows in sub-Saharan areas of eastern Africa. Although they are mammals, there are “eusocial,” which means that their lives are rigidly organized in patterns similar to those of ants, bees, wasps, and termites. They live in colonies of from 100-300 individuals. Male and female workers are ruled by a single queen who gives birth to all of the colony’s young. Only a few courtesan males get to inseminate her. (In the colonies, everyone but the queen and her courtesans have remarkably suppressed sexual hormones.)

Naked mole-rats have noticeably less sensitive hearing than most other rodents. Because that is true of every naked mole-rat as well as of its closest relative, the African Damaraland mole-rat, scientists have searched for a survival function to the impairment. Is there a way that being a little deaf might give a subterranean species an advantage? New research conducted at the University of Chicago and published in the September 2020 issue of the journal Cell Biology suggests that staying partly deaf may be necessary to help naked mole-rats hear at all.

In almost all mammals, hearing happens this way: Soundwaves pass through air in the outer ear’s auditory canal until they strike the eardrum, making it vibrate in time with the waves. Those vibrations reverberate from the eardrum along a set of three tiny bones in the middle ear. Because each of those bones functions as a lever, as the vibrations pass from one to the other they are amplified.

The third middle ear bone passes amplified vibrations to the inner ear, which starts with an oval window. That window is a thin membrane with a much smaller diameter than that of the eardrum. Because the inner ear’s oval window gives the soundwaves little area in which to disperse, the vibrations remain pressurized when they enter the fluid-filled spiral cavity known as the cochlea.

Not surprisingly, the cochlea, too, is an amplifier. In a human it is about the size of a pea. Its fluid puts up resistance to soundwaves, which means that as the vibrations travel they lose a lot of the strength they’d gathered in the middle ear. This means they are relatively weak when they push against bundles of tiny hairs in the cochlear fluid. Those bundles are made up of three layers of long, very sensitive outer hairs that create a net surrounding a single layer of shorter, inner hairs. The outer hairs expand and contract in response to sound, amplifying each wave one final, vital time before inner hairs convert the vibrations into electrical impulses that the auditory nerve transmits to the brain.

To test the rodents’ hearing, the researchers used electroencephalogram (EEG) equipment that records electrical activity in the brain. They tested both naked mole-rats and Damaraland mole-rats. (Fully haired, Damaraland mole-rats live underground in burrows in southern Africa. They, too, are eusocial.)

“If you put electrodes on the part of an animal’s head that processes visuals, you’ll see on the EEG a response to visual stimuli,” Thomas J. Park, Professor of Biological Sciences and Neuroscience at the University of Chicago explained in a phone call. “And if you place the electrodes near the cochlea, you can use the EEG to measure hearing.”

As expected, all of the mole-rats tested by the University of Chicago team scored as being hearing impaired.

As part of their search for what in the ears of these mole-rats might be missing from the long chain of reverberation and amplification typical of mammalian hearing, Park and his colleagues examined electron microscope images of the hair bundles in mole-rats’ inner ears. Clear in those pictures are misshapen inner and outer hairs.

“In humans, outer hairs amplify sound by a factor of about four,” Park explained on the phone. “If the outer hairs in mole-rats are too damaged to amplify soundwaves, the vibrations that they pass to the inner hairs are going to be dim. And if the inner hairs are also misshapen, once they receive faint soundwaves, they will probably do a poor job of translating them into nerve impulses.”

The team then examined previously published research detailing the genome of paper wasps and of humans. When they looked specifically at paper wasp genetic sequences that lie in locations known in humans to be associated with hearing loss, they found amino acid mutations in both the naked mole-rats and the Damaraland mole rats.

Park explained in a follow-up email: “The cool thing is that some additional analysis showed that the two species had different mutations. This suggests that the mutations were not from their common ancestor, but evolved independently as adaptations to something in their environment.”

Still to be addressed by the team was the question of why these two species of African mole-rats evolved to have suboptimal hearing. The species aren’t entirely similar physically. Damaraland mole-rats are haired, and they don’t have outer ears at all. Their colonies are roughly one-tenth the size of naked mole-rat colonies — though, according to Parks, their burrows would still be considered “crowded” by most biologists. Damaraland mole-rats also chirp far less frequently.

One possibility that Park’s team considered was that hearing had atrophied over generations for each of the two subterranean species in the same way that their ability to see in dark tunnels had deteriorated. Who needs hearing at all for life underground?

Actually, crowded into completely dark burrows, Damaraland mole rats probably do. And with colonies ten times as big, naked mole-rats really do. Working, eating, and even sleeping cooperatively, they communicate with as many as 300 peers fairly steadily with soft, call-and-response chirps.

Realizing this, for the researchers the question “Why did naked mole-rat hearing degrade?” became the more interesting question “Could there be a survival advantage for naked mole-rats to relative deafness?”

The team’s Cell Biology paper suggests that there is. There is a well-known “stethoscope effect” to sound in burrows and tunnels. A tunnel amplifies sound. Inside a burrow where up to 30-40 Damaraland mole-rats live, the sound level could be annoying. In a burrow where 300 naked mole-rats talk and talk and talk, the collective sound could be deafening.

The sensitivity of inner hairs in cochlear hair bundles can be flat-out destroyed by prolonged exposure to loud sounds. (This is why rock musicians and operators of jack hammers need to protect their ears.)  If both the cochlea and the burrows of naked mole-rats were to amplify sound, a constant barrage of loud, call-and-response chirps might drive the entire colony stone deaf.

Partial deafness is not a “bug” in the African naked mole-rat species. It’s a feature.

Read Rebecca Coffey’s story on another eusocial species: Facial Recognition Development in Wasps Hints at a Mystery of Human Evolution