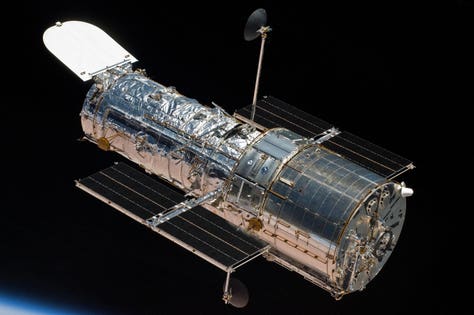 The Hubble Space Telescope resumed normal operations over the weekend, after a terrifying few weeks when it looked like the stalwart spacecraft was on its last legs.

Hubble reported itself offline on its Twitter account early in October and NASA explained that the craft had entered safe mode after one of the three gyroscopes used to point and steady the telescope had failed.

According to the space agency, the gyro that failed had been “exhibiting end-of-life behaviour”, which is no surprise given that Hubble was originally a 15-year mission and has now been scanning the Universe for over 28 years.

A backup enhanced gyro should have seamlessly taken over when the original failed, but it initially refused to perform “at a level required for operations” after being switched off for 7.5 years. To get it going again, Hubble technicians basically instructed the scope to jiggle around so as to shake any blockages out of the gyro and then switched it off and on again and into different modes a few times.

The strategy worked and Hubble returned to normal operations late on Friday, October 26. Its first science observations, completed on Saturday, were of the distant, star-forming galaxy DSF2237B-1-IR and were taken in infrared wavelengths with the Wide Field Camera 3 instrument.

Hubble’s lifespan is now almost twice what was originally intended and its successor, the James Webb Space Telescope, will be capable of feats that Hubble can only dream of. However, the powerful new spacecraft has been beset by delays over the last 20 years and its launch date has been postponed once again from May 2020 to March 2021.

The project has over-run its budget many times over and NASA now believes the end total will creep over $8bn. If that happens, the agency will have to apply for reauthorization from Congress for the space telescope.

That might seem like an astronomical sum to pay to further our understanding of the Universe, but the James Webb could potentially revolutionise that understanding by making observations of the earliest moments after the Big Bang and examining our Solar System and nearby exoplanets in detail that has been impossible until now.

In the meantime however, scientists are still reliant on booking time with observatories like Hubble to continue unravelling the mysteries of the Universe.