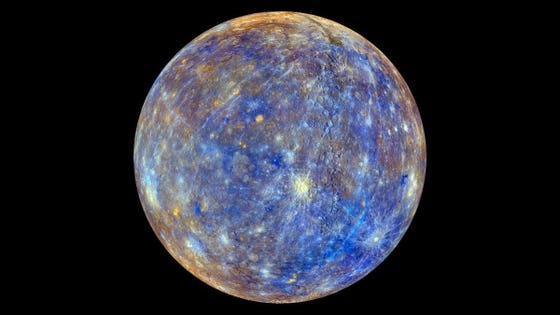 This colorful view of Mercury was produced by using images from the color base map imaging campaign during MESSENGER’s primary mission. These colors are not what Mercury would look like to the human eye, but rather the colors enhance the chemical, mineralogical, and physical differences between the rocks that make up Mercury’s surface.

Some four and a half decades after NASA’s Mariner 10 spacecraft sped by Mercury, a group of planetary scientists is now talking about landing on our solar system’s innermost planet. The idea is to better understand this tiny world’s origins, iron-rich core, and unique geochemistry.

A robotic lander mission would likely not be feasible until well after 2025 when the European Space Agency’s (ESA) and the Japan Aerospace Exploration Agency’s (JAXA) BepiColombo mission’s two orbiters begin circling Mercury. Then following a successful potential lander mission, the logical next step in exploring the tiny world would be for a separate sample-return mission.

“A sample return from Mercury would allow us to do laboratory-based mineralogical analyses to place constraints on its surface composition,” Kathleen Vander Kaaden, an experimental petrologist at Jacobs Engineering Group, now under contract with NASA Johnson Space Center in Houston, told me. Age dating of a sample would allow for better timing constraints on both volcanic activity as well as cratering caused by impactors.

At this point, however, planetary researchers are merely talking parameters and concepts; there are no mission plans. But there is widespread scientific support for aggressive exploration of Mercury, which is now seen as somewhat of an endpoint extreme of rocky planet evolution. With a mass only a third that of Earth and a solar orbit of just under 88 days, it’s now considered a comparative test case for a range of potentially tiny, rocky extrasolar planets.

“There is no substitute for ground truth, no matter how many sets of remote sensing data on surface composition have been acquired about a planet,” planetary scientist Sean Solomon, Director of the Lamont-Doherty Earth Observatory at Columbia University, told me. “We must make in situ measurements of the surface composition to be sure.”

There are no Mercury samples in current meteorite collections, says Solomon, the principal investigator of NASA’s now-completed MESSENGER mission to Mercury, which circled the planet from 2011 until 2015. But he says even if there were, we would still not know where those samples originated on Mercury. That lack of geological and topographical context automatically limits a planetary scientist’s ability to determine their history and origin on their parent body, says Solomon.

Artist’s conception of BepiColombo at Mercury.

Arguably, one of Mercury’s biggest remaining mysteries is the origin of its anomalously large iron core .

Vander Kaaden says there are two primary competing hypotheses to explain Mercury’s large iron core. The first is that materials that accreted to form Mercury in this innermost part of the solar system had less rocky materials and much higher concentrations of metals. So, she says, when they combined into Mercury, the planet automatically had a large core and thinner mantle. The other idea is that the outer portion of Mercury was simply blown off during a giant impact.

Mercury also has water ice at permanently shaded regions of its poles.

Vander Kaaden says such water ice could have been delivered by either a large impact event from water-bearing asteroids or comets; or ongoing bombardment by micrometeoroids over time.

Solomon says the idea is to analyze the mix of those various polar deposits, thought to range from water ice to complex organic compounds, to infer their geologic history.

But Vander Kaaden says Mercury likely never had clement conditions of the sort that would lead to significant amounts of liquid surface water, such as rivers and lakes. Perhaps because of this, she says as yet there have been no telltale signs of Mercury harboring organics or prebiotic molecules.

Yet that doesn’t mean Mercury is an unrewarding target.

Placing a hard date on the age of a sample would offer unprecedented constraints on the impact history of our whole inner solar system , says Vander Kaaden.

However, any such mission is likely still decades away. Thus, Vander Kaaden says a Mercury lander mission would be a logical interim step.

As this will likely only happen once in our lifetime, Vander Kaaden says location of any actual sample or sample return sites will be key. “We’ll need to retrieve diverse materials that have the ability to answer a wide range of scientific questions,” she said.