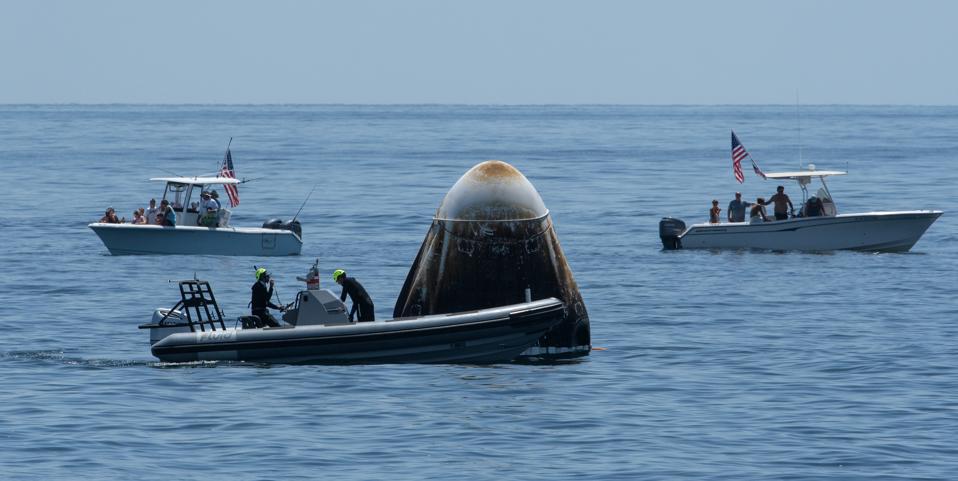 Yesterday’s historic Crew Dragon splashdown was notable for a lot of good reasons, but one not so good – the appearance of private boaters around the splashdown site, putting both themselves and the crew at risk.

SpaceX’s Crew Dragon vehicle splashed down in the Gulf of Mexico off the coast of Florida yesterday, Sunday, August 2, at 2.48 P.M. Eastern Time. This brought to a close the Demo-2 mission, the first-ever private human spaceflight to orbit, heralding an exciting new era of space travel.

However, shortly after the splashdown – the first in the U.S. since the Apollo Soyuz Test Project in 1975 – a problem emerged. Private citizens on boats sauntered up to the capsule, before one brazenly sailed in front of it with a Trump campaign flag clearly on show.

The presence of the boats was widely derided, with some noting they could have been subjected to toxic fumes from the spacecraft, putting themselves in harm’s way.

They also hampered the recovery effort of NASA astronauts Bob Behnken and Doug Hurley, who had just spent two months in space, with the retrieval of the spacecraft delayed until the boats were cleared.

“That was not what we were anticipating,” NASA Administrator Jim Bridenstine said in a press briefing following the splashdown. “After they landed, the boats just came in. We need to do a better job next time for sure.”

In a statement, the U.S. Coast Guard said it had “worked closely” with NASA and SpaceX to plan the recovery. Boaters had been told to remain 10 nautical miles away from the planned splashdown site ahead of the event, with a patrol boat establishing a “physical presence” four hours before and a radio broadcast issued two hours before.

However, these boaters appeared to ignore those warnings, coming extremely close to the spacecraft. When it was eventually hoisted up onto its recovery vessel, Go Navigator, the private boats were clearly visible watching events unfold from behind the ship.

“Numerous boaters ignored the Coast Guard crews’ requests and decided to encroach the area, putting themselves and those involved in the operation in potential danger,” the Coast Guard said.

They added that while they could have boarded the vessels, “it would have required a massive undertaking of resources” in order to do so, with dozens of boats visibly present at the time.

What this will mean for future SpaceX splashdowns, and whether this region of ocean off the coast of Florida will be used again, isn’t clear. But what is clear is that there were some major breaches of trust from these boaters and, had there been an issue with the spacecraft, they could have caused significant problems.

“We have some work to do with SpaceX,” said Steve Stitch, manager of NASA’s Commercial Crew Program. “We will work together to do a better job for the next splashdown.”

ESG investments: Exponential potential or surfing one wave?
450-Million-Year-Old Fossil Named After Actor Who Played ‘Doctor Who’
Breathtaking images suggest there’s fresh ice on one of Saturn’s moon
Trump has ‘not been such an honest broker’ on Palestinian statehood, Saudi prince says
Beijing, the seat of science capital