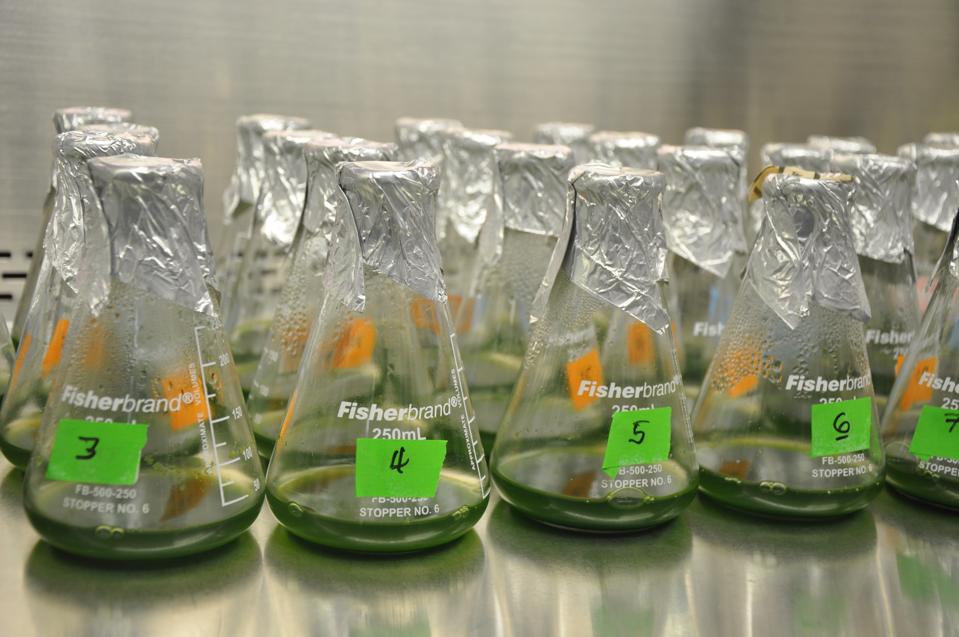 In the dark? That’s not how we normally think of plants being grown. But it’s a method that could be used to grow algae as a renewable fuel source, with even better results than regular ol’ sunlight.

The researchers working on this are from University of California, Riverside (UCR) and it’s part of a two-year project. Those involved are being tight-lipped about the methods they’ll be using (pending the upcoming publication of research on a closely related project).

What’s been announced so far: The work is being funded with a two-year, $60,000 fellowship from the Link Foundation, which supports projects to foster innovation in energy, aeronautics and ocean engineering. The foundation is named after Edwin A. Link, who created autonomous underwater vehicles.

Diving deeper, the fellowship is going to Elizabeth Hann, a doctoral student in plant biology who university officials say is going to use the time to test whether she can grow algae for biofuels completely in the dark using solar-generated electricity.

Is there preliminary work that suggests this is possible?

“There is no preliminary work published that shows this is possible,” Hann says. “This will be a first example that we are aware of.”

Bottom line: She says algae could compete with petroleum as the fuel of the future if the process of growing it was more efficient.

“The conventional way to grow algae for biofuels relies on photosynthesis,” Hann adds. “Photosynthesis is an inefficient way to convert sunlight into biomass.

“We can grow algae potentially more efficiently utilizing solar panels to convert sunlight into electricity, and use this electricity to power heterotrophic growth.”

The liquid that the algae grows in fuels this growth, or “feeds the algae,” Hann explains.

The Algae Biomass Organization, an advocacy group for the U.S. algae industry, says some algae can grow in the dark using sugar or starch, also called heterotrophic growth.

Hann is working with university Chemical and Environmental Engineering Professor Robert Jinkerson to grow the algae on campus, and with collaborators at the University of Delaware. They’re using an algae called Chlamydomonas reinhardtii, which Hann describes as a model green algae, capable of both photosynthesis and heterotrophic growth.

Hann and Jinkerson aren’t the only ones working to develop more cost-effective ways of growing algae. “What makes this different from other algae biofuel projects is that we’re specifically looking at growing algae without the limitations of photosynthesis,” Hann said in a news release. “We’re growing algae in the dark.”

The release adds: “Though algae lack roots, stems, and leaves, like land plants they use photosynthesis, which is the process of using sunlight to convert carbon dioxide and water into food for itself. This process converts sunlight into usable energy at roughly 2% efficiency, whereas solar panels can do it at 25% efficiency or higher.”

Algae for biofuels is typically farmed in ponds, using the sun. Hann’s method will be to “potentially grow the algae in a confined space, just using electricity from the solar panels,” the university says.

What about startup costs?

“Since we believe our process will be more efficient, we will need less land to create the same amount of biofuel,” she says.

Some people have questioned the future of algae as a biofuel. Maybe this work will shine new light on the possibilities. Hopefully these researchers won’t keep us in the dark too much longer.

Hann and the Jinkerson Lab’s work on biofuels is featured in a UCR promotional video from 2019.

NASA Is Just Hours Away From First-Ever Sampling Of Asteroid’s Surface
First study of its kind reveals how we can slow down propaganda memes online
One underdog sector is beating the market this month, but two traders stand divided on its prospects
How Contagious Is A Single Sneeze?
How You Can Watch Live As NASA ‘Kisses’ An Asteroid That Could Destroy Earth In The 22nd Century