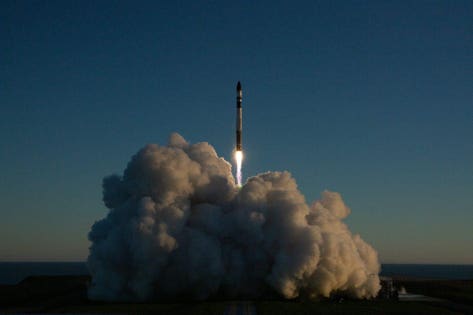 The rocket was named “Make It Rain”.

Rocket Lab has successfully launched a rideshare mission for the private aerospace company Spaceflight, as they look to continue racking up their launch cadence in 2019.

The U.S.-based company’s two-stage electron rocket lifted off from their Launch Complex 1 on the Mahia Peninsula in New Zealand at 12.30 A.M. Eastern time (4.30 P.M. local time) today, June 29. About 56 minutes after launch, the seven satellites were deployed into their intended orbits using the rocket’s kick stage.

“Congratulations to the dedicated teams behind the payloads on this mission, and also to our team for another flawless Electron launch,” Rocket Lab founder and CEO, Peter Beck, said in a statement.

“It’s a privilege to provide tailored and reliable access to space for small satellites like these, giving each one a smooth ride to orbit and precise deployment, even in a rideshare arrangement.”

This was the company’s third launch of 2019, following a previous launch on May 5. Each mission is given a nickname, with this latest being called “Make It Rain”, named for the large amount of rainfall in Spaceflight’s home city – Seattle – and in New Zealand. The previous mission was called “That’s a Funny Looking Cactus”, with “Two Thumbs Up” coming before it on March 28.

The satellites on board Make It Rain included Global-3, a satellite for the Earth-imaging company BlackSky, the largest satellite on the launch at 60 kilograms. The rest of the satellites totaled 20 kilograms and included two cubesats for U.S. Special Operations Command, called Prometheus.

There was also room on the launch for two SpaceBEE cubesats from U.S. startup Swarm Technologies. In early 2018, Swarm launched its first four satellites on an Indian rocket having been denied a license from the Federal Communications Commission (FCC) for being too small and thus too difficult to track, earning the company a $900,000 fine. They redesigned their satellites to be larger, as on this flight and a Falcon 9 flight in December 2018.

For Rocket Lab today’s launch is another step towards the company beginning regular flights to space. They are hoping to conduct one launch a month in 2019, rising to two launches a month by 2020 with the help of a new launch facility being built at NASA’s Wallops Flight Facility in Virginia.

A testament to that increased launch cadence, Rocket Lab said it’s next launch – also from New Zealand – was scheduled for lift-off “in the coming weeks”, with monthly launches also planned for the rest of the year. In total, the company has now launched 35 satellites since its first commercial flight in January 2018, with an impressive 100% mission success rate for its customers.

Many other companies are now vying to break into the smallsat launcher market, but Rocket Lab is continuing to cement itself as the market leader. While they can’t compete with other larger companies like SpaceX on price, at about $22,000 per kilogram compared to about $3,000 on a Falcon 9, they are touting a quicker time to orbit of just a couple of months from contract procurement to launch.