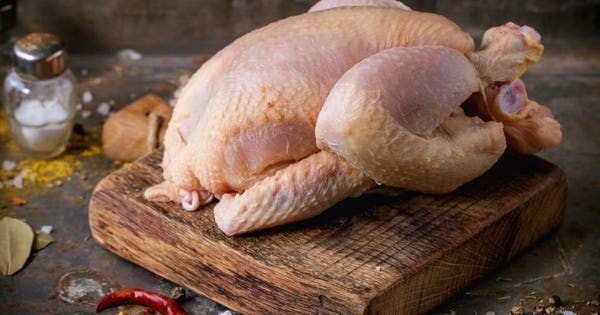 Salmonella, here we go again. My my, how can I resist you?

That’s not quite how the ABBA song goes. But, Mamma Mia, how many more Salmonella outbreaks will we have this year? The Centers for Disease Control and Prevention (CDC) has just added yet another to its list for 2018, bringing the total number to 16. This time it is Salmonella Infantis linked to raw chicken products. Oh, and speaking of “resist you,” this strain seems to be resistant a number of different antibiotics. Clearly in a year that has had over twice as many Salmonella outbreaks as 2016 or 2015, “bye, bye, Salmonella, doesn’t mean forever.”

Here are the numbers so far for this newly listed outbreak: 92 reported cases from 29 states resulting in 21 hospitalizations and 0 deaths. Interviewing 54 infected people revealed that most (89%) had prepared or eaten “chicken products that were purchased raw, including ground chicken, chicken pieces, and whole chicken,” as described by the CDC. The first reported illness began on January 19, 2018, and the last began September 9, 2018. People infected have ranged from less than 1 year to 105 years old. Looks like those 106 years or older have been spared so far. The median age has been 36. Testing has found samples of the Salmonella to be resistant to antibiotics such as ampicillin, ceftriaxone, chloramphenicol, ciprofloxacin, fosfomycin, gentamicin, hygromycin, kanamycin, nalidixic acid, streptomycin, sulfamethoxazole, tetracycline, and trimethoprim-sulfamethoxazole. My, my.

So, diarrhea, here you go again. As I have written before, common symptoms of Salmonella infections are fever, headache, nausea, vomiting, loss of appetite, abdominal cramping, bloating, and diarrhea. In other words, this particular outbreak has led to a lot of chicken bleep. Most cases of Salmonella intestinal infections resolve without specific treatment after 4 to 7 days. However, some can progress to more serious problems when the bacteria spreads into your bloodstream and other parts of your body like your arteries, joints, and heart. In some rare cases, death can result.

At this point, “CDC is not advising that consumers avoid eating properly cooked chicken, or that retailers stop selling raw chicken products.” However, you should cook your chicken thoroughly to at least 165°F internally before eating it. No sucking on raw chicken parts or licking fingers, knives, or toilet bowl seats that have touched raw chicken. Disinfect everything that has touched raw chicken. And wash your stinking, filthy, disgusting hands, thoroughly and frequently.

How many more times will we be singing the Salmonella song again this year? Earlier this month, there was a beef with beef, resulting in an October 4th JBS Tolleson, Inc., recall of approximately 6.5 million pounds of beef products. A beef-related outbreak of Salmonella Newport, which sounds like a very swanky strain, has resulted in 57 reported cases from 16 states and 14 hospitalizations. Again, you’ve gotta wonder how poopy food safety standards, regulations, and monitoring have been this year. Because unless something is done to curtail this outbreak of Salmonella outbreaks, the answer to the question “bad diarrhea, does it show again” will be yes many times over.

Why iPhone users are suddenly going wild creating custom looks for their home screens
U.K. to revise strategy for satellite navigation system
The origins of stainless steel date back almost 1,000 years earlier than we realised
How Playful Are Different Types Of Dogs? Scientists Say They Have An Answer
Wildfire Smoke: Here Is Another Reason More N95 Face Masks Are Needed