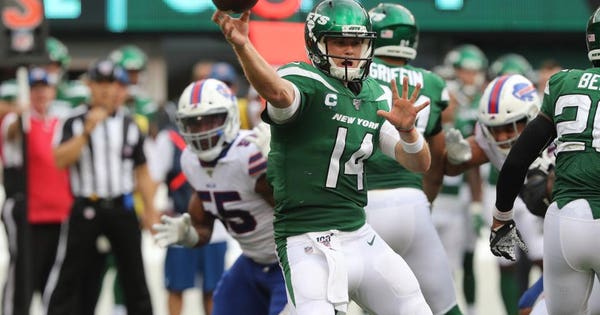 Quarterback Sam Darnold #14 of the New York Jets, played against the Buffalo Bills on September 8, 2019, but will now be out indefinitely. (Photo by Al Pereira/Getty Images)

Should you kiss the New York Jets’ season goodbye? After all, Jets starting quarterback Sam Darnold is now sidelined indefinitely after being diagnosed with what’s known as the “kissing disease,” otherwise known as infectious mononucleosis, otherwise known un-affectionately as mono.

It is not clear how Darnold got mono. He hasn’t kissed and told. He may not even know how he got it because symptoms take a while to manifest, usually four to six weeks after initially getting infected with the virus. Heck some people can’t remember what they did earlier today, let alone four to six weeks ago.

Plus, kissing isn’t the only the only way that you can catch mono. Contact with various body fluids such as blood, semen, and most commonly saliva can transmit the viruses that cause mono. So pouring saliva from an infectious person into your eyeball or up your nose could give you mono. More common ways of getting mono including sharing drinks, food, utensils, and other items that may have touched an infectious person’s saliva.

Notice that I said “the viruses that cause mono,” and not “the virus.” While Epstein-Barr virus (EBV) is the most common culprit, other viruses can cause mono, such as cytomegalovirus (CMV), rubella, Hepatitis A, B, or C, HIV, and adenovirus. Thus, in this way, mono is really multi, as in multiple possible causes. In fact, there are even non-viral causes of mono such as toxoplasmosis.

Extreme fatigue is one reason why Darnold won’t be able to play for a while. As the Centers for Disease Control and Prevention (CDC) describes, typically mono will result in two to four weeks of some combination of the following symptoms: extreme fatigue, fever, sore throat, head and body aches, swollen lymph nodes, a swollen liver, and a rash. However, sometimes symptoms will last longer, potentially much longer, in rare cases even over six months.

Another possible reason for keeping Darnold sidelined is to protect his spleen from rupturing. In some cases, mono can result in an enlarged spleen, otherwise known as splenomegaly. Splenomegaly can persist even after other symptoms have resolved. The suffix “-megaly” after a body part means the body part is “enlarged.” So, in theory, “walletmegaly” would be an enlarged wallet.

An enlarged spleen can be a bit like an inflated balloon, easier to rupture when it gets hit. Your spleen is located to left of your stomach inside your body. Note: if your spleen is outside your body, see your doctor immediately.

You may think much about your spleen. After all, you can’t take a selfie of it. Nevertheless, your spleen does play some important roles such as filtering out old red blood cells from your blood, storing platelets and white blood cells, and serving as a defense system against certain kinds of bacteria. Here is a WebMD video that describes your spleen as a “bouncer for your blood”:

Your spleen is not like your head. You can live without it but you may be more susceptible to certain bacterial infections. Regardless, rupturing your spleen is a medical emergency, because lots of blood vessels run through your spleen, meaning that you could potentially bleed to death.

A publication in the journal Sports Health offers some guidance on when to return to playing sports after you’ve been diagnosed with mono. As Jonathan A. Becker, MD, and Julie Anne Smith from the University of Louisville recommended, rest until your symptoms have completely resolved, which is at least 10 to 14 days after symptoms first appeared. Then, wait another 14 days before resuming light activity. Don’t try to further increase your activity until you get the size of your spleen checked. A doctor can try to feel the size of your spleen, but since it is inside your body and under your rib cage, such estimates can be inaccurate. An ultrasound is a more precise way of determining if your spleen is enlarged. If your spleen is not enlarged then you can gradually and progressively increase activity. Continue refraining  from contact sports until your doctor has deemed you ready, which could be as long as 28 more days.

Adding all of these days means that Darnold probably will be sidelined for at least one-and-a-half to two months. However, he could easily be out for longer. Since there is no real treatment for mono except for rest, good hydration, and over-the-counter medications for the different symptoms, there isn’t much that he can do to hasten his return.