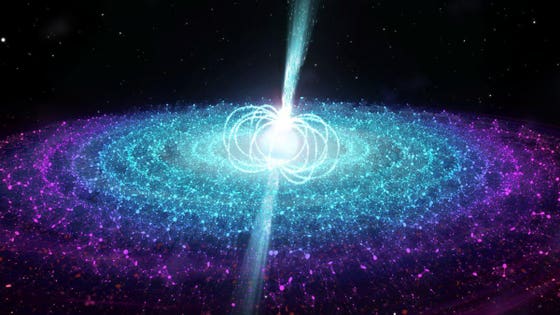 Basically no part of this is fun.

Yes, black holes get all of the attention. They’re mysterious, they lurk in the shows of interstellar space, they break the laws of known physics, they can trap you forever, they have a cool-sounding and easy-to-understand name. They’ve got great branding.

Take, for example, the neutron star.

The neutron star is essentially a giant atomic nucleus. It’s a whole bunch of neutrons all crammed together into an object just a few miles across. At first glance, that doesn’t seem too scary. After all, neutrons are neutral, and how scary can neutralness be?

Let’s talk about the densities. Neutron stars are perhaps the most compact objects in the universe – just a hair’s breadth away from collapsing into a black hole. This makes the gravity on their surfaces just a little bit extreme. The tallest “mountains” are just a bare centimeter high. Any taller and the supreme gravity just shrinks the heights down to size. If you were standing on such a mountain (I know, I know, but work with me here) and fell off, by the time you hit the ground – remember, just about a centimeter down – you’d be traveling a decent fraction of the speed of light.

That’s assuming you could even get your bearings. All neutron stars spin incredibly fast, with the fastest topping out in the range of tens of thousands of revolutions per minute. That’s faster than the blender in your kitchen.

Speaking of light, the gravity around neutron stars is so strong that it can trap beams of light in orbit. These orbits aren’t stable – there’s no cool halo around these things – but hey it’s the thought that counts, right?

But what neutron stars lack in the ability to capture light they more than make up for in the ability to blast it. They’re so hot they simply glow in X-rays, and a few spare protons found floating around in their guts, coupled with the fast rotation, give them some wickedly strong magnetic fields. These magnetic fields are powerful enough to literally dissolve you from a thousand miles away.

Yes, you would be melted by the X-rays well before the magnetic fields did their dirty work, but like I said, it’s the thought that counts.

Let’s not think about it too much.