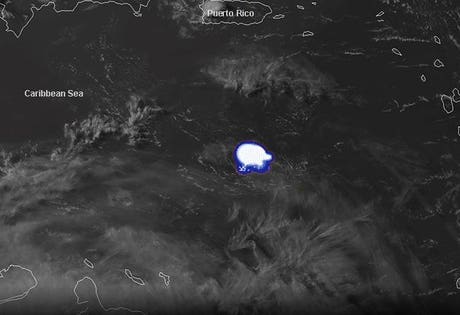 I normally write about weather and climate related topics. However, a press release from the University of Hawaii caught my eye. It isn’t about a hurricane or a rain-induced mudslide on the side of a volcano. It is about an asteroid. As a meteorologist or atmospheric scientist, I am used to getting asked about meteors and astronomy-related things. I politely explain that meteorologists study the weather and atmospheric processes not meteors or asteroids. For the first time, a group of scientists successfully located an incoming asteroid roughly the size of a small car last week with an innovative set of telescopes. Why does this matter to us Earthlings?

The asteroid explosion was captured by meteorological weather satellites.

Before going too far down this road, it is useful to explain how asteroids, meteoroids and meteors differ. According to NASA, an asteroid is “a small rocky body orbiting the Sun.” Most people are familiar with the asteroid belt located between Mars and Jupiter. A meteoroid is a piece of an asteroid that broke away due to a collision. If a meteoroid enters Earth’s atmosphere, it will vaporize and often produce a trail of light (a so-called shooting star). This streaking and vaporizing piece of rock (not a star) is called a meteor. If the rock reaches the surface of the Earth, it is called a meteorite.

I certainly had some “common sense” inkling on why this news matters to us, but I wanted to dig deeper. The University of Hawaii announced that astronomers, using the ATLAS and Pan-STARRS survey telescopes, detected a small asteroid as it made entry into our atmosphere near Puerto Rico on June 22, 2019. The NOAA GOES-East weather satellite even detected the asteroid exploding in the atmosphere with its lightning detection instrument (above). The National Weather Service radar at Puerto Rico also detected traces of the asteroid. The University of Hawaii press release points says:

The 4-meter diameter asteroid, named 2019 MO, was observed four times in a span of 30 minutes by the ATLAS Maunaloa facility, just after midnight Hawaiʻi time on the morning of Saturday, June 22. At that time, the asteroid was only 500,000 km from Earth – or 1.3 times the distance to the Moon. These initial observations were assessed by the NASA Jet Propulsion Laboratory’s (JPL) Scout impact analysis software, and the asteroid was given a modest impact rating of 2 (a rating of 4 is “likely”). However, JPL’s Davide Farnocchia noted a possible match with an atmospheric infrasound detection near Puerto Rico about 12 hours later, and he asked if the community could search for additional observations.

A map of the predicted trajectory and final impact location for asteroid 2019MO. The predicted path is based on observations from the University of Hawaiʻi’s ATLAS and Pan-STARRS survey telescopes.
Credit: Larry Denneau (IfA/ATLAS), Brooks Bays (SOEST)

The Pan-STARRS 2 (PS2) telescope also captured the asteroid. As with any scientific observation, additional observations are always valuable for improving entry path prediction. In some ways, this is analogous to my field of expertise meteorology. We use computer models to predict the track of a hurricane approaching the coast. With more observations and data, the models can often refine the prediction. Multiple observations allowed analysis software (essentially prediction models) to increase the impact rating to 4. At this point, I should probably backtrack and explain what an impact rating is.

NASA’s Center for Near Earth Objects Studies at the Jet Propulsion Laboratory is a good place to start. According to their website:

The Torino Scale, adopted by the IAU in 1999, is a tool for categorizing potential Earth impact events. An integer scale ranging from 0 to 10 with associated color coding (see below), it is intended primarily to facilitate public communication by the asteroid impact hazard monitoring community. The scale captures the likelihood and consequences of a potential impact event, but does not consider the time remaining until the potential impact. More extraordinary events are indicated by a higher Torino Scale value.

The two telescopes in the ATLAS system are separated by 100 miles on Hawaiʻi Island and Maui, respectively. ATLAS and Pan-STARRS are funded by NASA’s Near-Earth Object Observation program to look for asteroids near Earth. According to the University of Hawaii, ATLAS detects roughly 100 or so asteroids larger than 98 feet each year. The one detected this week was about the size of a small car (13 feet) and had total impact energy of roughly 3 to 5 kilotons of explosives, according to meteor scientist Peter Brown at the University of Western Ontario.

Here is the ultimate “so what” of it all. The University of Hawaii says, “For the first time in history, astronomers can provide sufficient warning to move people away from the impact site.” If this proves to be true, then astronomers will now get to figure out the challenges we face as meteorologists: Getting people to act on the warnings and avoiding ”cry wolf” situations. However, this exciting news continues to illustrate science in service to society.