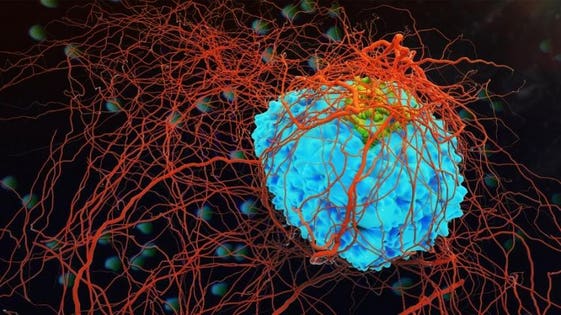 The chance of survival from breast cancer has dramatically increased in recent years, largely thanks to new treatments, but also due to better screening programs and awareness of the disease—leading to more women being diagnosed at an earlier stage. However, women who have tumors which have spread to other organs (metastatic breast cancers) only have a five-year survival rate of 22%.

New possible treatments are in development, such as tumor-infiltrating lymphocytes (TILs), which removed all tumors from a woman with metastatic breast cancer last year. But what if it was possible to stop these metastatic tumors forming in the first place?

A new study published today in the journal Nature Cell Biology has uncovered a new way by which cells that have broken away from the original tumor (disseminated tumor cells) may hide in other parts of the body, evading therapy designed to eliminate them before they can grow into metastatic tumors.

Disseminated tumor cells (DTCs) can be found in any part of the body in breast cancer patients, but an estimated 70% of women with metastatic breast cancer have tumors in their bones, thought to arise from DTCs that have planted themselves in the bone marrow, the spongy, blood cell factories present in large bones in the body such as the hip and leg bones.

“We know regardless of where we look we find dormant breast cancer cells around blood vessels. DTCs in bone marrow break down bone by chewing holes they can grow into,” said Dr Cyrus Ghajar, Director of the Laboratory for the Study of Metastatic Microenvironments at Fred Hutchinson Cancer Research Center in Seattle and lead author of the study.

The bone marrow has an extensive network of blood vessels to facilitate the constant production of new blood cells. When the researchers looked in more detail as to why the DTCs were there, they found that the DTCs were being effectively stuck to the blood vessels by proteins called integrins, which stick out on the surface of cells, allowing them to communicate with the external environment.

Researchers previously thought that DTCs were evading chemotherapy because they were not dividing (quiescent), but the new study suggests that maybe the situation is more complex and the interaction between the DTCs and and integrins is more important.

The team gave mouse models with breast cancer an antibody which targets a specific integrin called Beta-1, which they found to be particularly important.  They found that by inhibiting integrin Beta-1, they could sensitize the DTCs without awakening them and causing them to divide, therefore minimizing the risk of sparking off tumor growth. This is of particular importance, especially considering new evidence from last month showing that chemotherapy agents can in some cases cause breast cancer cells to spread.

Integrins are proteins found on every cell in the body and function to allow a cell to communicate with the environment around it, so at first glance, because they are so widespread, targeting them with a therapy would be highly likely to cause lots of toxicity and side-effects. However, the study found that although the chemotherapy used on the mice had a distinct effect on their healthy blood cells-this wasn’t any worse when the integrin inhibitor was added.

“We looked at this in mice with no tumors too. Chemotherapy has a distinct effect on immune cells, but when you add integrin inhibition, there’s no difference,” said Ghajar, adding that the mice appeared otherwise largely unaffected.

There is one integrin inhibitor currently FDA-approved, natalizumab for some patients with multiple sclerosis or Crohn’s disease. Unfortunately, this doesn’t target the right type of integrin that Ghajar’s studies indicate might be a therapeutic target to prevent metastasis in breast cancer, but it does mean that there might be a pipeline for the development and approval of another integrin inhibitor if the approach is proven to work in further studies.

But this is some way off, the antibody used in the study only works in mice and even if a human version is made and it reaches clinical trials, Ghajar isn’t suggesting it would be used for all breast cancer patients.

“I would propose if we can prove efficacy and design a clinical trial in the future, patients would have to be disseminated tumor cell positive, for example a positive bone marrow aspirate,” said Ghajar.

NASA resumes human spaceflight from U.S. soil with historic SpaceX launch
Demo-2 astronauts get to work on ISS
After oil’s best month ever, these are the key levels to watch
Twitter restricts Republican lawmaker’s Antifa tweet for ‘glorifying violence’
How Are You Preparing to #LaunchAmerica?