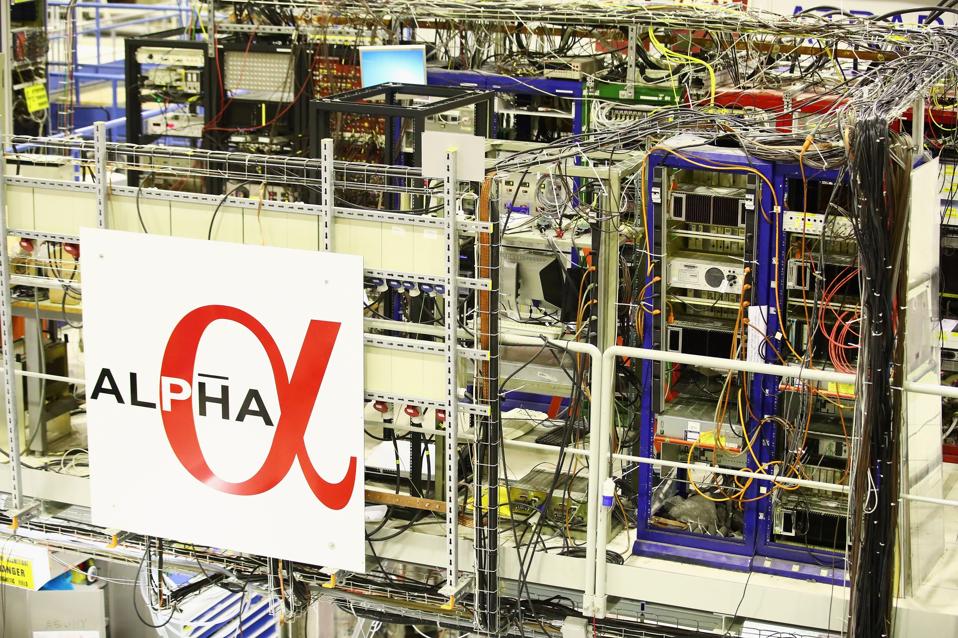 One of the biggest mysteries of modern physics is the question of why we don’t see as much antimatter in the universe as ordinary matter. A possible explanation is that antimatter is simply different from ordinary matter in an unknown, but important, way. To explore this possibility, scientists have trapped antimatter to study its properties. However, making precise measurements on antimatter require that it be nearly stationary and that has been hard to do until now. Scientists working at the CERN laboratory in Europe have just announced that they have used lasers to slow the motion of antimatter, resulting in unprecedented capabilities to its properties.

Antimatter is a subatomic cousin of ordinary matter. Its existence was predicted in 1928 by British theoretical physicist Paul Dirac, and it was discovered in 1932 by American physicist Carl Anderson. For every known subatomic particle, there is an antimatter equivalent. The electron’s counterpart is the positron, identical in every way to the electron, but with the opposite electric charge. The antiproton and antineutron also exist, and were discovered in the 1950s at a particle accelerator located on a hill, high above the University of California at Berkeley.

Matter and antimatter don’t get along all that well. If you combine them, they annihilate each other in a huge burst of energy. On the subatomic level, this energy is manageable, but if one were to combine a gram of antimatter with a gram of matter, the result is an energy release comparable to the atomic explosion at Hiroshima. A gram is equivalent to the weight of a paperclip.

It’s this antagonistic relationship with matter that makes antimatter difficult to study. If an antimatter particle comes into contact with its matter equivalent, the two disappear in a subatomic flash of energy.

While scientists have been able to store and manipulate small quantities of antimatter, they have not been able to answer why antimatter is so rare in the universe. According to Einstein’s famous equation E = mc2, energy should convert into matter and antimatter in equal quantities. And, immediately after the Big Bang, there was a lot of energy. Accordingly, we should see as much antimatter as matter in our universe, and yet we don’t. This is a pressing unsolved mystery of modern physics.

According to Einstein’s equations, as well as other modern theories of antimatter, antimatter should be exactly the same as ordinary matter, with only the electric charges reversed. Thus, antimatter hydrogen should emit light just like ordinary hydrogen does, and with exactly the same wavelengths. In fact, an experiment showing exactly this behavior was reported in early 2020. This was a triumph for current theories, but meant no explanation for the universe’s preference of matter was found.

Because of the difficulty of storing antimatter, the light emission spectrum of antihydrogen was not as precise as the equivalent measurement using ordinary hydrogen. One of the key reasons is that it has not been possible to slow antihydrogen atoms down. When they are produced, they continue to move at velocities that are large enough to affect the precision of measurements.

So researchers affiliated with the Alpha experiment at CERN set out to slow down antihydrogen atoms. They made antiprotons in their accelerator and combined them with antimatter electrons coming from the decay of sodium-22. They then used lasers to slow down the resultant antihydrogen.

The method is really quite clever. Ordinarily, if you hit an atom with a photon of enough energy to make the electron jump from a low energy state to a higher one, and then the atom decays back to the low energy state, the result is that the atom is in exactly the same state as it was before. Energy is conserved.

However, in laser cooling, researchers irradiate atoms with photons of an energy just below the amount required to make electrons jump from one state to another. If the atoms were stationary, no transitions would occur. However, if the atoms are moving, those atoms moving towards the light source will contribute some motion energy, so the energy of the atom and the energy photon is enough to make electrons jump between energy states.

The atom eventually decays, emitting a photon, but emitted photon will be the full energy of that atomic transition, while the absorbed photon will be slightly lower energy. Because the emitted energy is a little higher than the absorbed energy, the result is that the atom will have slightly lower energy after this process. Consequently, it will slow down.

When Alpha scientists aimed such a laser at antihydrogen atoms for several hours, they found that the resulting average velocity of the atoms was about 10% what they were at the outset. The temperature of these antihydrogen atoms became about 0.012 degrees Kelvin, or nearly absolute zero.

When the researchers tested the precision of light emitted by these cooled atoms, they found a fourfold improvement over earlier measurements.

This first use of lasers to cool antimatter atoms will have very real consequences for studying antimatter. Already, they have an improved measurement of the properties of light emitted by antihydrogen. These techniques will also help a great deal in their main research program, which it to study the effects of gravity on antimatter. Conventional wisdom suggests that antimatter should be affected by gravity in a manner identical to matter, but this has not yet been tested. First results of this very interesting measurement could be available in 2022.

The cooling of antimatter by lasers is a tremendous technical achievement and its value will only become more apparent over time.