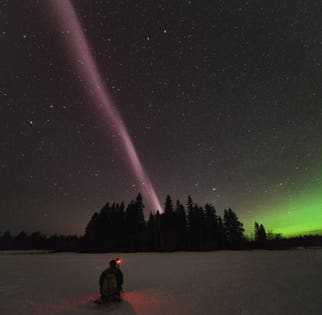 Distinct from the more typical phenomenon of the aurora borealis and aurora australis, found near the poles, a separate optical phenomenon in the sky known as STEVE can occasionally be seen. For years, scientists were puzzled as to what caused it, but that mystery has now been solved.

It isn’t often that skywatchers discover a new naked-eye phenomenon in astronomy, but it happened just a few years ago.

Aurorae frequently come in a variety of colors: greens, reds, and even blues, all related to the atomic transitions that ions, atoms, and molecules found in our atmosphere undergo. But STEVE is a unique phenomenon, and possesses colors and color combinations that no aurora has.

Appearing as a purple/green or mauve-colored streak of light, STEVE was originally thought to be a new type of aurora. However, aurorae are always characterized by charged particles precipitating down onto the Earth, and the beautiful ribbon shown here was later shown to not have any such particles associated with it.

This photograph was taken in Alberta, Canada, and shows a STEVE event that is visible even in the presence of light pollution. Although STEVE was only recorded for the first time in 2008 and was only formally discovered in 2016, it is now known to be a natural phenomenon that has probably been occurring for billions of years.

Normally, aurorae are produced by the Sun’s charged particles striking the atoms in Earth’s upper atmosphere.

When charged particles are sent towards Earth from the Sun, they are bent by Earth’s magnetic field. However, rather than being diverted away, some of those particles are funneled down along Earth’s poles, where they can collide with the atmosphere and create aurorae. STEVE events can occur alongside aurorae, but have independent and distinct properties and origins.

A multicolored aurora, shown with the Milky Way over New Zealand, is possible as incoming charged particles strike different layers and elements present in the atmosphere.

When electrons recombine with ions, they cascade back down to lower energies, creating aurorae from their emission lines.

The Aurora Australis, as seen from the ISS, is one of the planet’s two major aurorae. The yellow and green phenomena to the right are the airglow of the sodium layer and the atmospheric oxygen above it, respectively. Although both optical phenomena can be seen from Earth, neither one is the same as STEVE.

STEVE is distinct from this for multiple reasons.

The northern lights (aurora borealis) from the Arctic Circle on March 14, 2016. The rare purple color can sometimes be created in aurorae near the poles, as a combination of blue and red emission lines from atoms can create this uncommon sight along with the more typical green. STEVE, again, is distinct from this, too.

1. STEVE is a thin ribbon that appears at lower latitudes than aurorae.

The Aurora Borealis or Northern Lights illuminate the night sky on November 12, 2015 near the town of Kirkenes in northern Norway. Note the irregular patterns, distinct from the ribbon-like nature of STEVE.

This is a false-color image of ultraviolet Aurora Australis captured by NASA’s IMAGE satellite and overlaid onto NASA’s satellite-based Blue Marble image. The Earth is shown in false color; the aurora image, however, is absolutely real. Solar activity causes these aurorae, but only produces a limited palette of colors.

3. Most importantly, aurorae are defined by charged particles falling onto our atmosphere; STEVE doesn’t have them.

Instead, STEVE is produced when charged particles collide much higher up, in Earth’s ionosphere.

This particular STEVE event was taken by a citizen scientist, where the green ‘picket fence’ phenomenon can be seen alongside this purplish/mauve optical glow. The glow is not caused by ions, but rather by particles colliding and heating up, creating visible-light emissions similar to a filament in an incandescent bulb.

These collisions cause tremendous heating and the emission of light, similar to incandescent bulb filaments.

This particular sighting of STEVE, the purplish ribbon, was accompanied by the greenish ‘picket fence’ phenomenon shown here. Regardless of the source of the charged particles that create it, the greenish feature is classified as a true aurora from the fact that it was, indeed, created from free electrons colliding with atmospheric particles.

STEVE is often accompanied by a true aurora: a green ‘picket fence,’ originating from electron precipitation.